Singapore is building the newly Marina Bay Financial Centre (MBFC), which is sophisticatedly designed not only as one of the global hubs of international business and commerce, but also to make the island city-state become a more happening place to live, work and play. 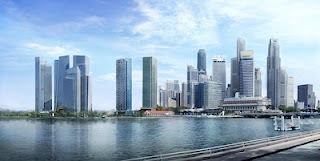 “Our role is to manage and oversee the MBFC project as well as maintaining the development’s world-class facilities to the highest standards,” Lester Lim, RQAM’s director of Marketing Communications, explains.

He attests that Marina Bay, dubbed one of the Asia’s best business addresses, will position MBFC not only as a property investment haven, “But this Singapore’s largest integrated mixed-use development is also leading its way toward becoming the island city-state’s new downtown.”

Singapore’s political stability and strong economy make it possible to build such a giant project as MBFC, which is designed to facilitate the country as the financial capital of Southeast Asia that links to global economic activities. “And the presence of the three office towers at MBFC will accommodate better worldwide trading and financial activities,” Lester adds.

The topping out ceremony on September 28, 2011 marked the completion of Tower 3. “This means that new downtown at Marina Bay is set to double the existing Grade A office space at Raffles,” Lester remarks, referring to the fact that MBFC is now Singapore’s largest provider of prime Grade A office space. 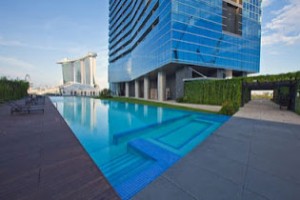 Such facilities may be available in many places of their kind. However, enjoying unparalleled bay views from own balconies at the MBFC’s two residences is something else.

Almost all of the 428-unit luxury apartment units at the 55-storey Marina Bay Residences are built with open balcony.

“The government of Singapore allows foreigners to take a full ownership of their property. We are targeting foreigner buyers. Indonesians have made up a large percentage among foreigners who own properties in Singapore. Owing to its strong currency and healthy economy, the island city-state is indeed one of the world’s great destinations for property investment,” Thomas Tan, head of Residential Marketing at RQAM, says.

Both Thomas and Lester were in a recent trip to Jakarta sharing their views about MBFC and their optimism about the development.

“Aside from featuring a waterfront living, we are also building Marina Bay Link Mall. Scheduled to start operation in 2012, this 176,000 square feet subterranean mall is interconnected via the MBFC office towers,” Thomas explains.

Adding to Thomas’s assertion, Lester recalls the last year’s opening of Marina Bay Sands Integrated Resort, which is located within the proximity of MBFC. The resort features various entertainments, attractions, as well as gastronomic indulgence and shopping centers, an art science museum and two theaters. “To sum up, these ‘fun’ elements contribute to MBFC as an exciting place to live, work and play,” Lester asserts while Thomas nods in agreement.