Originally was published in The Jakarta Post on June 20, 2015.

Motorcycle taxis, known as ojek, have become one efficient solution to Jakarta’s notorious traffic congestion. “When you are in a hurry and want to go to a certain place, an ojek is truly the most reliable mode of transport. A lot of people need their services regularly. I’m one of them, as I value my time more than anything. I use the service not only for transportation, but also for delivering documents and even buying some food,” said Nadiem Makarim, CEO and founder of Go-Jek, a leading ojek services provider. 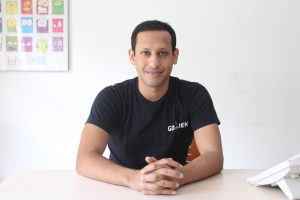 His assertion about the crucial role of ojek as a transportation problem solver is what led him to start the company.

“One day I sat down and talked with some ojek drivers and asked about the rules at the pangkalan ojek (motorcycle taxis station). I found out they’re severely underutilized, meaning they work 14 hours a day and only get three to four orders. The reason is their orders mainly come only during rush hours. And after taking one order, they have to go back to the pangkalan and queue. This is highly inefficient.

“And we can increase the efficiency by creating a tool that connects users to a service provider. That’s where the idea of Go-Jek came from.”

It was in 2011 where Nadiem and his business partner Mikey Moran started G-Jek from scratch. They only had one call-center base, and Nadiem had to juggle between his full-time job and running Go-Jek.

In March 2014, they re-launched the company with more services on the map, including Go-Jek smartphone application and the recently launched food delivery app Go Food.

At the helm of Go-Jek, Nadiem works closely with five directors who directly report to him. They are all partial owners of the company. Covering the cities of Jakarta and its surrounding areas, Bandung, Surabaya and Bali, the company currently has 300 employees and more than 10 thousand registered drivers nationwide.

The leadership mentality in running and growing the company is getting the best talents in the country and let them run independently, Nadiem says of the team’s management’s approach.

“I’ve seen in many companies that the bigger they grow, the more bureaucratic they become and the more controlling mechanisms they’ll put in place. This is because they are worried that as they grow bigger, the potential to lose control is also higher. And there are more hoops you have to jump through in order to get the work done.”

That’s not the case in Go-Jek, Nadiem added. ‘We think the opposite. The bigger we grow, the looser our control is. We allow different teams and leaders to run their teams their own way. The team leaders are free to develop their own management approach, so long as they can achieve their targets.

“We are not an ojek company. We are not a courier company. We are just a software company. In reality, our customers are those ojek drivers. We connect them to customers. As a platform for those drivers, we therefore support them with technology, resources and coaching.”

Coaching is crucial in honing the skills of human resources. However, Nadiem is aware the difficulty the company is facing in handling more than 10 thousand drivers.

“There’s no way we can train everyone intensively. What we do is we have an initial training called ‘ad hoc’, in the event that there are issues or complaints from customers. We will remove any driver from the system if that particular driver consistently gets negative reports or lower ratings.”

The Harvard graduate added that his company has also set up a high target toward growing the company. “We set up a crazy target, but we did it. We only had 600 drivers in January. Five months later, we have more than 10 thousand. And the number keeps increasing.”

How did he and the team do it?

One simple answer is that most Go-Jek employees are very loyal, he said. But the recipe that makes them loyal is everyone in the company does their work on a mission.

“We are a group of missionaries as well as employees. Our mission is to change this industry for the good. We want to improve the lives of thousands of Indonesians and also provide a source of employment. You can become Go-Jek drivers and you’ll make enough money to take care of your family.”

The regular ojek is more expensive because they don’t have any certainty of orders. So, Nadiem and his team work hand-in-hand to keep up with the technology to increase the number of customers for the drivers. “So far the result is quite satisfying. Our best drivers can make up to 7 million per month,” he said.

In a business, he believes it is important to hire people “who are better than you because it is useless hiring someone if you are better than him or her at everything. That’s another recipe that makes Go-Jek expand rapidly.”