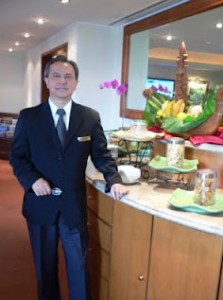 Andrew Fernandez has spent his entire career working in the hotel industry; starting from being a waiter in an international class hotel in his hometown, Penang, Malaysia to his current position as the General Manager at Meliã Purosani Hotel, Yogyakarta.

WHY DO YOU LIKE TO LIVE IN YOGYAKARTA?
The vibrant nature of the city of Yogyakarta; its friendliness and peaceful atmosphere are conducive for both my career and lifestyle. Attracted by the city’s charm, I decided to live here even though an earthquake had just happened when I first arrived in the mid 2006. I have only been here for only two years, but I already feel home.

WHAT IS THE BIGGEST FRUSTRATION OF YOGYAKARTA LIFE?
Doing business can at times be frustrating, especially when seeking various services. Much of the time one has to depend on the deliveries from larger cities and unpunctuality is usually where the problem starts.

HAVE YOU LIVED IN OTHER CITIES BEFORE?
Penang, Malaysia is where I grew up and started my career in hotel industry. After four years of working in that field, I left for the UK to take my diploma in Hotel and Catering at the Oxford Polytechnic. Prior to taking up my position in Yogyakarta, I was working in the state of Melaka in Malaysia, a state well-known for its Baba / Nyonya (a designation for Mr. and Mrs.) and its Portuguese heritage.

HOW WOULD YOU COMPARE YOGYAKARTA WITH OTHER CITIES YOU HAVE LIVED?
Compared to the cities I have visited and lived in, I found Yogyakarta has been able to keep its cultural practices intact yet it continues to develop. This really makes Yogyakarta unique unlike many big cities in Indonesia; despite their rapid development, many have lost their old world charm. The pace of life here in Yogyakarta is slow, but the city is always busy due to many small enterprises doing businesses of buying and selling nearly anything traditional; from small souvenirs to antiques and batik.

WHAT IS YOUR FAVOURITE BUILDING IN YOGYAKARTA?
Kraton Jogja. Not only does the Kraton a symbol of glorious Javanese culture, but this Sultan Palace is truly an exotic place representing the insight of Yogyakarta as a special district in Central Java.

HOW ABOUT YOUR FAVOURITE EATERY?
There is no one favourite eatery for me since there are so many choices. When I fancy for an evening’s dining out, I could go to places ranged from the well-known Gajah Wong restaurant to a local outlet selling Nasi Padang along Kaliurang Street.

WHAT LITTLE-KNOWN FACTS CAN YOU SHARE?
The earthquake in 2006 caused not only calamity but also damage to the city. Despite efforts being made to beautify and rebuild the city, there is more need to be done. For that reason, together with my staff, I have been entrusted to carry out Community Projects for the community, which we have been doing hitherto. After all, Yogyakarta is still and always worth to visit.

WHERE DO YOU SHOP?
I have no preference over where to shop, but outlets at Marlioboro can be a choice.

WHAT IS YOUR FAVORITE WEEKEND LIKE?
My favourite weekend is when my family from Malaysia is coming to visit. This is the best moment to share the wonderful atmosphere whilst having local food and visiting local sites and places of interest.

By Aulia Rachmat, published in The Peak Magazine Indonesia, November 2008.