Inspired by traditional Eastern culture, Martha Tilaar tells Aulia Rachmat that innovation is what lies been behind her cosmetic company’s success.

Counting her blessings, the eponymous founder and president director of the Martha Tilaar Group declines to concede that the global economic crisis is a threat to her business. It is, rather, a challenge that has the potential to turn into an opportunity. 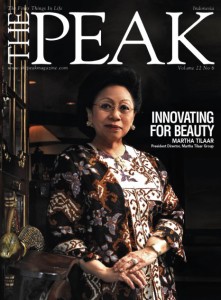 ”The world economy is now experiencing a structural shift in which Asia is en route to becoming a centre of industrial manufacturing and other services,” she says, while showing The Peak her office full of ethnic nuances.

In February, the group was bestowed the ASEAN Business Award 2008 for innovation in the large company category.

Often referred to as “the mother of Indonesia’s natural cosmetics,” Martha Tilaar has, for more than three decades, continuously developed cosmetics products. During the current global crisis she has been even more motivated to introduce more innovations to enhance the beauty of Indonesian women.

Born to an ordinary Javanese family in Kebumen, Central Java in 1937, Martha Tilaar certainly does not look her age. Her appearance is what women in general would aspire to – pretty with a youthful look. 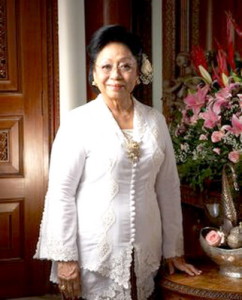 To Martha, nevertheless, a woman should not only be pretty but also intelligent, well-spoken, an innovator and, most importantly, a survivor in any situation. Action speaks louder than words in her case: Martha has proved that hard work has produced results.

With intensive research and creativity as the two main elements of its innovative approach, the Martha Tilaar Group is not only a multi-segmented cosmetics manufacturer of over 1,500 products; it has become the market leader in a number of categories such as lipstick, powder, foundation and eye shadow.

Such outstanding achievement exists not only within the archipelago but Martha has managed to go international as her products now reach as far afield as South Korea, Russia, Poland and Croatia as well as countries in Eastern Europe and the Asia Pacific.

Accustomed to wearing batik, Martha recalls the opportunity she had in the late 1960s to study at the Academy of Beauty Culture in Bloomington, Indiana, US, where she joined her husband who was on a scholarship. Whilst she earned a certificate as a beautician, Martha’s overseas stay was also an invaluable lesson.

“I used to hold the belief ‘West was always best’ until I was rebuked by a lecturer for choosing the topic of Geishas for a term paper instead of something about my motherland,” she says, recalling the moment that became something of a turning point for her. 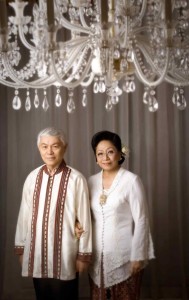 “My international friends wrote about their home culture but I wasn’t able to do so because I knew so little about mine.” Subsequently, Martha became keen to learn a lot more about Indonesian culture.

Awarded an honorary doctorate in fashion and artistry from the World University, Tucson, Arizona, Martha has long been interested in classical Indonesian entertainment like wayang (traditional puppetry), ketoprak (Javanese popular play) and ludruk (grassroots theatre). She is also keen on travel, though most of the time traveling, to her, means working.

While operating a beauty salon in her house in the early 70s, at a time that acclaimed cosmetics products were dominated by Western brand names, Martha traveled to various places worldwide to polish her skills in the art of beauty. Hong Kong, Tokyo, Bangkok, Paris, London, Rome and New York are just some of the cities she visited.

As a preliminary step along the cosmetics manufacturing road, Martha paid visits to factories like Yves Rocher in France and Mary Quant in the UK.  Even though she gained a broad range of skills and the opportunity to learn about the cosmetics and culture from her overseas visit, Martha was not able to fathom out an answer to the concept “back to nature.”

As she continued her quest for knowledge, Martha discovered the concept of Rupasampat Wahyabyantara; an ancient Javanese phrase meaning the harmonious mix of inner and outer beauty: While outer beauty is reflected in a beautiful face, hair and body; inner beauty is indicated by a caring personality.

The philosophy of seeking to achieve both inner and outer beauty has become the guiding principle behind the blending of Indonesian medicinal plants, rich culture and environmental awareness so as to give an Eastern approach to nature a global look, she explains.

“The beauty, appearance and natural skin fairness of native Kalimantan women is what influenced us when we produced a whitening product.”

Using the ingredient from langsat fruit (lansium domesticum), the giant’s newest whitening product, Putih Langsat, is the result of extensive research by the Martha Tilaar Innovation Centre (its research and development division). The product contains an enzyme that triggers defenses against pigmentation. Suitable for Asian skin, the science behind this product has been presented at seminars in Singapore and Australia. 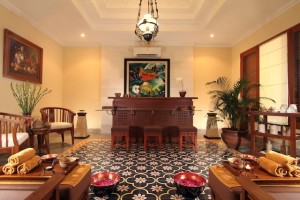 Married to Alex Tilaar in 1963, the two are blessed with four children; Bryan, Pinkan, Wulan and Kilala (Kiki).  Both parents have maintained a harmonious relationship with all four, all of whom have help to build the cosmetics empire.

Alex himself was a university professor and expert adviser at the National Development and Planning Agency (BAPPENAS). A humble civil servant, Alex earned a limited income yet maintains his role as head of the family.

Martha and Alex have demonstrated their belief in the importance of education as all of their children hold degrees from reputable overseas universities. 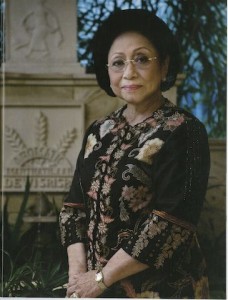 Alex hasn’t got involved in any of the Martha Tilaar Group’s business activities, but is very supportive of his wife’s ventures. Indeed, his important role as a consultant has contributed to many of the company’s business concepts.

To develop her children’s sense of entrepreneurship, Martha recalls “during their childhood, I used to take them with me on business trips.”

Combining their academic and practical knowledge, all of Martha’s children are now pursuing professional careers within the Martha Tilaar Group.

“Bryan is highly motivated and really good at sales distribution. Pinkan has outstanding managerial skills. Wulan’s interest in art, design and IT has made a significant contribution to schools under Martha Tilaar Group. Having an artistic flair, Kiki has succeeded in developing innovative products and services, particularly in running the group’s spa outlets.”

In addition to her great interest in reading about health, fashion, beauty and cosmetics, Martha enjoys motivational books. Dale Carnegie is her all-time favourite author. “His most popular book, How to Win Friends and Influence People, offers priceless knowledge on leadership and character building, which have been the basis of my business expansion,” she remarks. 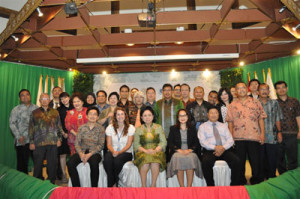 A great admirer of Mahatma Ghandi and Mother Theresa, Martha always sticks to her motto that “honesty is the trust. And winning trust opens your opportunity door of a success.”

As a woman and mother, Martha believes that the relationship between employer and employees should be similar to that of a mother and her children, without needing to abandon professionalism at work. Asked if she considers her employee her assets, with a friendly smile, she responds, “My employees are not goods, they’re human beings. So, they are not assets but partners in the business.”

Overseeing more than 6,000 employees is unquestionably a difficult task, but Martha has succeeded in doing so through the use of philosophy she inherited from her parents and grandparents, which she has turned into the acronym DJITU (which literally means “sharp”). The Indonesian words it encapsulates are disiplin (discipline), jujur (honest), inovatif (innovative), tekun (focused) and ulet (persistent).

“Ever since I was a little girl, I have applied those five traits as a yardstick for self-correction. And now the philosophy has become a work principle in our company to educate our employees towards unearthing their potential in everyday work performance,” she explains.

Martha has a wide taste in music as she likes a broad range of genres such as keroncong, pop and classical. Among her favourite musicians are Idris Sardi, Adi MS and the composer Mozart.

“Music is one of the innovative elements in life that deserves appreciation. I especially like keroncong. Though generally this traditional genre is popular among Javanese, the uniquely traditional tunes in keroncong have Portuguese influence. It symbolizes a meeting of East and West,” she remarks.

Grateful for her business success, Martha always tries to share her fortune with those less fortunate than herself. A good example is her training of women vendors of jamu (traditional herb) to prepare her products better and more innovatively. She has also developed the skills of village women nationwide to produce handicrafts, many of which have been exported to acclaimed cities across the world.

She concludes that while working nine to five should not be taken for granted, “If you have the chance to be an entrepreneur, you should seize it as it will not only enable you to make money but also create jobs for others.”

Published in The Peak Magazine, November 2009.

Photos by Adi NW and courtesy of Martha Tilaar Group.