The increasing public awareness of the world’s environmental problems has led to the rising demand for more sustainable buildings.

Now developers start applying green construction to reduce the negative environmental impact on a building during its operational life span. 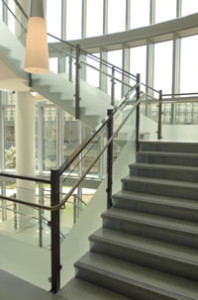 According to Green Building Council Indonesia (GBCI), constructing a sustainable building should not be limited to only design, but more importantly how the building is operated.

Particularly in major cities in Indonesia, a green building should be designed with tropical-style lighting and natural ventilation, so people can minimize the use of air conditioner.

This type of building should also be built with many pond or rain to maximize the use of recycle water. Even it is advisable that a high-rise building be equipped with rain water capacities on its upper lever like on the third floor. There are an increasing number of high rise buildings in Jakarta whose upper levels are designed with the park for not only a relaxing site but also for serving bin water.

GBCI also strongly recommends that the building’s interior be made from recycle materials that mirror sustainable architecture. According to the council, the materials should be those that can directly reduce carbon emission, or those that can substitute fossil fuels.

Jakarta Garden City (JGC) is a good example. Developed by the joint venture of Singapore’s based property developer Keppel Land Limited and Indonesia’s Modern Land, JGC being one of the largest townships in the city is raising the bar for its construction of green buildings. In fact, JGC has become the first residential development in Indonesia to win the Green Mark Gold Award from the Building and Construction Authority (BCA) of Singapore.

The BCA’s green building rating system evaluates a building for its environmental impact and performance in the areas of energy and water efficiency, environmental protection and quality, as well as other sustainable features. 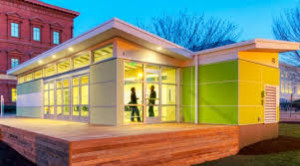 Lim Seng Bin, the JGC’s president director, said that the township incorporates the latest green technology, potential to achieve overall savings of 43 percent and 14 percent in energy and water consumption, respectively. “The saving is estimated to reach around Rp 1.87 billion each year.”

“The houses here are designed for natural ventilation to reduce the need for air-conditioning,” Lim further said. “Public spaces are constructed to allow daylight into common areas such as staircases and parking lots.”

The Singaporean Lim is also aware that Indonesians are starting to become more eco-conscious, as many seek homes with energy and cost savings while at the same time the homes benefit the environment.

Meanwhile, Sentosa Sitia, general manager of Buana Sakti, a subsidiary of PT Sampoerna Strategic that owns and manages Sampoerna Strategic Square (SSS), has his own view on how a green office building should play its role in promoting sustainability.

“A green office building is not only limited to having the building surrounded by lush greenery, flowers and plants. To reach the level of sustainability, the use of energy-efficient and eco-friendly materials is of great importance,” Sentosa adds.

Standing at the hub of Jakarta’s central business, SSS as a green boutique office building is currently in the process of getting the Greenship Certification by GBCI, he said. “We conserve the use of water, energy and building materials, as well as reducing the consumption of natural building materials. And no less important is that we always maintain the quality of our building, both indoor and outdoor, to meet the objective of creating sustainable and healthy environment.”

Photos courtesy of inhabitat.com and cdc.gov