Mick Jagger from The Rolling Stones released heavyweight 180-gram black vinyl editions on December 6, featuring his four solo albums, which once hit the music world from 1985 and 2001 –  She’s The Boss (1985), Primitive Cool (1987), Wandering Spirit (1993) and Goddess In The Doorway (2001). Featuring printed inner bags with lyrics, all the albums are remastered by Miles Showell at London’s Abbey Road Studios. 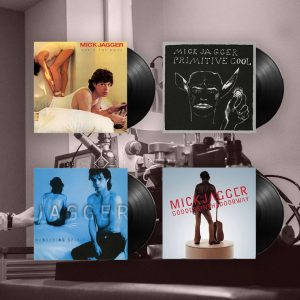 Jagger released various projects in his own name after his cameo on the Jacksons’ 1984 hit single “State Of Shock”. It was in the following year that  She’s The Boss, Jagger’s album debut was released. The album, which was produced by Jagger in collaboration with Bill Laswell and Nile Rodgers, was recorded at Compass Point in the Bahamas. The nine songs from the album include the single “Just Another Night”, which hit no. 1 on the Billboard’s Mainstream Rock Songs chart and the famous song “Party Doll”.

In 1993, his second album Wandering Spirit was released, showcasing the duo production of Jagger and Rick Rubin. Of the 14 songs in the album that present Jagger’s energetic singing are “Wired All Night”, “Angel in My Heart”, as well as “Use Me that features Lenny Kravitz. With contributions from Flea, Courtney Pine, Benmont Tench and Billy Preston, the album earned gold certification in the US.

Eight years later, in 2001, Goddess In The Doorway was produced by Jagger with Marti Frederiksen and Matt Clifford. Others who also contributed to the making of the album were  Chris Potter, Wyclef Jean, Jerry Duplessis and Lenny Kravitz. This Jagger’s third and latest album features, among others, “God Gave Me Everything”, “Everybody Getting High”, and also includes “Joy” where Jagger took along Bono and Pete Townshend in the song.  (WP)