Holding various senior management positions over 32 years has made Michael Ziesemer a perfect fit for leading a global giant. 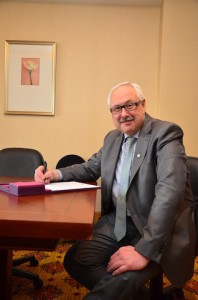 Ever since he was appointed COO of the company in 2008, Ziesemer has deployed his leadership savvy to help Endress+Hauser achieve above-market growth in its global operations.

Within the last two years, the company has generated an average of nearly US$2 billion revenue annually, with customers in the petrochemical industry, food and beverage, oil and gas, power station, water and other process industries.

“We expect that the year 2013 will see a 10 percent increase in our net sales. And I’m glad that we have since the beginning of this year established our presence with sales and service in Indonesia,” he said during a short visit to Jakarta.

Ziesemer said that the success of a privately owned company had a lot to do with its strong corporate culture based on customer orientation and the trustworthy interaction of associates and shareholders.

Ziesemer is aware of the differences in local cultures in every country in which Endress+Hauser operates. “Indonesian culture is not the same as that of China or the US. For example, our office in Jakarta employs around 90 people, most of whom are locals. Despite the differences in local cultures in our offices worldwide, we have benchmarked strong corporate culture as a universal value.”

The culture is what fuels Ziesemer’s management know-how in leading his subordinates. As COO, he is in charge of sales, service, projects and solutions. It is his job to supervise the business network of more than 100 offices in 45 countries. 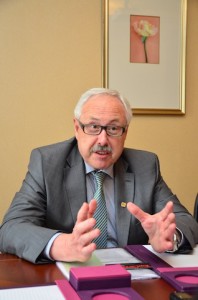 “Managing 10,000 people is impossible. You can’t even remember their names. What I do is to work with a certain number of teams of 30 to 40 people. It’s a team effort that translates my leadership as COO” he said.

A leader, in his view, should be a good communicator, and respect is a precondition for leadership. It takes wisdom to be a good leader, as he or she needs to have the empathy to understand others.

“I’m very skeptical about the model of so-called charismatic leadership. It’s nonsense in my view. Everybody is interconnected today and communication plays a crucial role in our daily routine. People know what is best for themselves. So we don’t need to exercise a compelling charm to influence others. Being wise is the key. A good leader delivers effective communication so that misunderstanding can be avoided,” Ziesemer said.

For Ziesemer, effective communication is important in maintaining harmonious relationships not only with people related to his work – including subordinates, associates and customers – but no less important within a family.

Skiing, biking and hiking are among the activities he likes doing with his grown-up daughters. He said that such activities had the potential to strengthen family ties. The 62-year-old Ziesemer also likes classical music. “Gustav Mahler is my favorite composer, and I quite often go to the opera with my wife, Brigitte.”

Investing in the future

A believer in long-term organic development, Ziesemer has developed a clear strategic focus with his teams on the development of customers as a prime source of investing in the future. “Here I’m talking about technology and innovation. I believe that oil and gas will still be the leading sector in the next five years. However, looking at the energy composition, we will have more electrical energy in the future. That’s why we are now starting working on power stations. The purpose is to keep a balance in different industries in order to get a bit less dependent on certain volatile industries.”

Ziesemer is such a future-minded leader that even this character reflects his life outside of work. He has a great interest in exploring new places. “My best travel destination is always the next place that I have never been before,” he said with a smile. “I’ve visited Java and Bali before, and I’m eyeing exploring other regions in the archipelago.”

Ziesemer also likes the nature of the Arctic region. “I go there quite regularly. I’m an arctic explorer, indeed.”

Appreciating local cuisine is an interesting cultural experience, he said. “I like very much nasi goreng. I’ve eaten that for many years, but I sometimes get stomach problems when they put in too much chili,” he said with a laugh.

Ziesemer is a wine collector. Bordeaux reds are at the top of the list, but others such as American, Spanish and Italian wines are also among his favorites. “I specially like Château Léoville-Barton. But I keep many of those bottles in my collection list. As you know, collectible items will have higher appraisal value in the future.”