Mark Germyn is leading with a people-based approach to establish a famous global theme park brand in Southeast Asia.

With more than 40 years of management experience in the tourist and hospitality industries, Mark Germyn understands how an amusement park and tourist attraction should run. 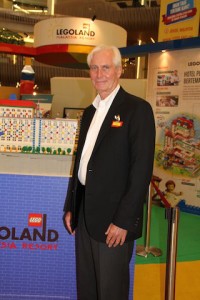 In his short visit to Jakarta, the general manager of Legoland Malaysia Resort shared four elements that have made Legoland one of the world’s successful theme parks: creativity, quality, technology and human capital. Developing the four areas is what he also considers his recipe to success in leading the park’s business operations.

“Creativity that lies in the construction toys by the Lego Group become the bedrock of Legoland parks all over the world. The Lego toy is all about creativity and imagination. And this is what fuels us to create a lego-themed park with educational and fun environment,” Germyn asserted.

He added that the popularity of Lego as the toy brand is synonymous with its uncompromising quality. “Lego hasn’t had a product recall for the last 25 years. So the focus on quality is paramount. By the same token, quality is also what built on all the Legoland parks.”

As technology now plays a much greater role in human civilization than in the past, he said that Legoland continued to invest in technologies implemented in the park’s thrilling rides, shows and attractions. “At Legoland Malaysia, we have 4D theater, computerized Legoland education session for kids, to name a few. In September, we will have ‘Star Wars Experience’ which is a large air conditioned indoor attraction.”

Last but considered very important is human capital, as Germyn believes it is a crucial element that keeps the business running. “We are investing in 1,000 and some employees at Legoland Malaysia, who play their roles according to their skills and expertise. From those with menial jobs to management roles, they all work hand-in-hand to share the same goals, contributing to business revenues and enhancing the individual career achievements. Their payrolls have also given a significant economic impact to the region.” 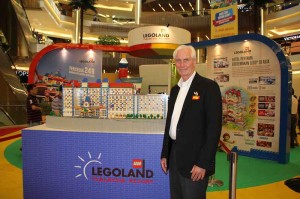 In day-to-day business operations, he added that, “Our employees are called model citizens for their very important contributions to the business. How our employees are engaged and interact with our audience helps visitors get a more hands on experience with what Legoland has to offer. Yes, just like in any other Legoland park, we invest a lot in human capital.”

The word Lego comes from the Danish phrase, “leg godt”, which means “play well”. The brand was born in 1934 by a Danish carpenter in Billund, Denmark. The same year also marked the establishment of the brand’s first factory, which produced wooden bricks for construction toys.

Later in 1947, the company expanded to the production of plastic bricks focusing on children 12 years of age. Fast forward, Lego has produced a myriad of collections of construction sets of bricks for children as young as 3 years old to teenagers.

“A lot of people think Lego is for kids, but in fact, there are quite a lot of adults that play it too,” Germyn remarked.

Aside from the head factory in Billund, Lego has expanded its manufacturing presence in Mexico, Czech Republic and Hungary.

Opened in 2012 and comprising Lego-themed park and hotel, Legoland Malaysia Resort is the sixth in the world and the very first in Asia.

Taking on the role as head of both park and hotel daily operations, Germyn is very optimistic about the resort’s future. “Aside from our more than 70 rides, shows and attractions, Johor is a great holiday destination. Location is what we initially identified prior to building the theme park. It’s near Singapore and we also have direct flights from big cities in Indonesia. With more visitors coming, we added the water park and a 249-hotel after the first year of operations. In fact, the success that the Malaysia park has so far gained is a great aspiration that has led the headquarters to open the seventh Legoland in Dubai, with construction already started at the beginning of this year and slated to open in 2016.”

In spite of his optimism, Germyn finds that Malaysia and other Southeast Asian countries do not have as strong as a Lego brand awareness compared to Europe and North America.

“That will be my leadership and management challenge. My strategic standpoint is to protect the equity of our brand. Through our human capital investment, we also deliver the experience to the best of our ability in order to strengthen the brand awareness here in Southeast Asia, especially in Malaysia and of course including in Indonesia.”

To achieve this objective, Germyn inculcates his subordinates with a sense of empathy, understanding and respects for others. “This is all important for maintaining a solid team. I also tell my staff the importance of tenacity. Our brand is big, but we have to make it bigger.”

Business is always engaged in competitive areas, “so you have to follow trends. In the case of the entertainment business, it is always changing. My advice to everyone is despite keeping struggling to achieve or even exceed market’s expectations, it is important to stay current with the trends, especially in relations to technology. But never ignore the importance of human capital that can keep you hitting the road further,” concluded Germyn, who admires Winston Churchill for his tenacity.

General manager of Legoland Malaysia Resort since February 2014. Previously, he held various positions in international expositions (2009-2013), as well as in the tourist and hospitality industries such as, among others, president & CEO at Britannia Beach Historical Society (2007-2009), president of ProFun Management Group, Inc. (2002-2007), managing director of Space Park Bremen (2002-2005) and president & general manager of Legoland California (2000-2001). Before that, he also had held various positions at Warner Bros Movie World in Germany and Australia, as well as being manager of rides and shows at Universal Studios Florida.

I cook a lot of seafood, especially dishes in pacific flavors and international fusion fare. I also ride motorcycle on weekend and read when I don’t feel like want to go anywhere in my spare time.

I have visited various countries in different continents. Every country has its own uniqueness to offer. Indonesia is unique in a way that the archipelago has rich cultural diversity. Just like people in Johor, I find Indonesians are very friendly.

Staying fit as part of the art of living

Health is the greatest wealth in life. It is important therefore that I keep maintaining a healthy life. Apart from watching my dietary intake, I regularly run in the morning, mostly in the gym. In the winter, I like skiing. As I now reside in Johor, I will miss out on winter sports. Hope I’ll get the chance to ski again in the near future.

All of my 4 children have grown up. One is a pilot, one is in the US Coast Guard, one is a teacher and the youngest is currently studying to be an actress. Thanks to today’s advanced technology, we are able to maintain our long distance family relationship.

Text and photos by Aulia R. Sungkar. Published in The Jakarta Post on June 28, 2014.