Tourism sector is a fertile environment for entrepreneurship. In the case of Indonesia, it has the potential to grow small and medium businesses and to better position the country on the world’s economic map, according to Mari Elka Pangestu.

“Indonesia needs market diversification to anticipate the decreasing number of tourists from the West, mainly impacted from the unfavorable economic conditions in European countries and the United States,” Mari Elka Pangestu, the newly elected Minister of Tourism and Creative Economy, asserts.

At the 15th ASEAN Tourism Forum in Manado, North Sulawesi last January, she advised that both public and private sectors across the archipelago should start intensifying efforts to promote the country’s tourism to Far East regions such as China, India and other Asian countries, including Russia, many of which are experiencing a remarkable economic growth.

To boost the national tourism industry, Indonesian government has recently matched up the country’s tourism authority with the creative economy. It’s a new portfolio created by President Susilo Bambang Yudhoyono as a part of the cabinet reshuffle last October. 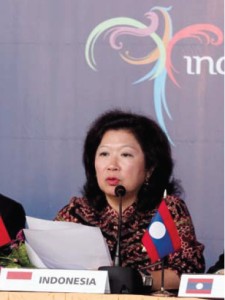 Mari, who was the former Trade Minister before this new portfolio, stresses the importance of entrepreneurship in playing its role to boost the tourism sector.

“The objective is to encourage small and medium enterprises (SMEs) to take innovative approaches toward the development goals of creative economy,” she says adding, “One of the goals is to strengthen the creative image of Indonesian products and services as part of destination branding in the international market.”

She further says that creative economy should include various aspects of businesses, ranging from Food and Beverages, fashion, music, theater, spa to creative designs, arts and crafts.

Mari cites the home-grown luxury brand Bagteria, which is used by celebrity Paris Hilton, as one way to promote not only the product but also the destination.

“Pekalongan and Solo in Central Java have long been known as the capitals of the Indonesian batik industry. Why can we make a corridor to connect the two cities, packaging them to whet the appetite for more growth in the tourism sector, the batik industry and other businesses related to the destination, such as handicrafts and foods,” she advises while gesturing in excitement. The minister says that together with the creative economy, Indonesian tourism industry has the potential to generate up to IDR 100 trillion or around US$11.2 billion revenue for the country.

“To achieve that, we are set to start realizing our plan of commercializing creative ideas of Indonesian cultures. It’s the time to scale them up!” she expresses her confidence.

So, besides Bali’s famous tourism hubs such as Kuta, Nusa Dua and Ubud, the Ministry of Tourism and Creative Economy has added 15 more premier tourism destinations under a new program, Destination Marketing Organization (DMO). 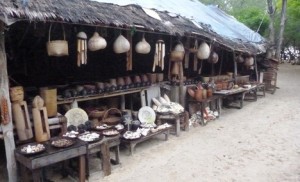