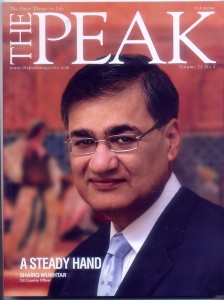 “The next 18 months are going to be tough for the country,” says Shariq Mukhtar.

Citibank’s country officer for Indonesia is referring to the inescapable impact of the global economic crisis, which has affected almost all sectors including banking and finance.

Citibank worldwide is currently taking three steps towards tackling the crisis, he says. First is “Getting Set,” another term for reducing “toxic assets” (in effect, liabilities). Next is “Reengineering,” meaning cutting down on expenses. (Over the years, and with continued expansion the corporation ended up hiring too many people, with consequently high overhead costs.)

The third step is to continue developing partnerships to leverage the company’s global networks and resources against tough competition in order to achieve a higher-profile global “footprint”.

Shariq seems to be confident that the three steps, combined with optimism and persistence, will take Citibank through the current difficulties. “What’s more important is that we are implementing these plans, and the results so far are quite promising!” he says, with a grin.

The 53-year-old also has a more specific view with regard to the Indonesian banking landscape.

Two crucial aspects need to be taken into consideration, he adds, Capital Adequacy Ratio (CAR) and liquidity. The central bank has done much to ease up liquidity, which has been a concern among banks in general. In other words, people are seeing some tightness on liquidity, although the top 10 banks are generally in decent shape.

As for CAR, banks in Indonesia are so far complying with the capital requirement, Shariq asserts. “As for Citibank, our CAR has already reached 16 per cent. That’s twice what the law requires!”

To prove it, Citibank has aggressively been investing in Indonesia and the bank showed remarkable growth from 2005 to 2008, with seven additional retail branches coming onstream (taking the total to 20) and 66 Citi Financial Centers (from just two previously), nationwide.

The company also claims that it has become the largest issuer of credit cards in the nation in terms of market share.

Born and raised in Karachi, Pakistan, Shariq left for the US in 1976 for higher education at the University of Minnesota, Minneapolis. Soon after earning a bachelor’s degree in accounting and finance in 1981, Shariq qualified as a Certified Public Accountant (CPA). 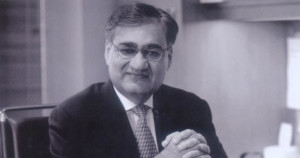 His father, the late Syed Mukhtar Ahmed, had a far-reaching influence on Shariq’s education. “My father was the first in the family who went to university using English as the language of instruction,” Shariq reminisces.

As the third of four brothers, Shariq views his father as a role model who cared deeply about his children’s education and struggled to achieve business success. “After he graduated from New Delhi University, my father tried his hand at business in Karachi before returning finally to India for a successful career in the film industry,” Shariq says, recounting his father’s past.

His father wanted him to be an architect, but during his second year at college Shariq realized that architecture was not his cup of tea so switched to accounting.

Shariq likes the US education system because it gives students an opportunity to experiment during their first two years at college to find out what major suits them. It is very different compared with the education system in his Pakistan homeland where university students have to choose their major before the start of their first semester.

Shariq enrolled in the business faculty, as a job in the financial world was what he was aiming for. That decision later paved the way to a career in banking where he achieved remarkable success after more than two decades with Citibank.

His initial experience, though, of living with an American family proved to be an object lesson in cross-cultural understanding.

“I remember when (the host mother) asked me if I wanted to eat something. As I’d been taught to say ‘no’ for a couple of times before finally accepting an offer, (she) took my first ‘no’ as the final answer, leaving me to go to bed hungry.

“I learnt that I must quickly adapt to the cultural norms of my host country.” 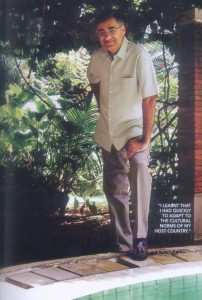 His move to Jakarta in April 1997 was his first overseas assignment, during which he subsequently witnessed the impact of the Asian financial crisis firsthand. “My two-year stint as vice president & chief financial officer was very challenging, yet I learnt the importance of having a well-conceived contingency plan in place for coping with the impact of a crisis on customers and employees.

“Our management team quickly reacted to the predicament, so as to protect the long-term interests of our franchise.”

During the May 1998 riots, Jakarta was virtually paralyzed, he recalls. “I remember peering down at the main road from my then office in Pondok Indah where I saw smoke, broken glass and burnt-out cars.”

After stints in Taiwan and Singapore, Shariq eventually returned to Jakarta in October 2005 as the CEO of Citibank Consumer Banking. Serving over one million customers in the archipelago, the business currently has more than 100 ATMs of its own. But with the bank working together with all the ATM networks, Citibank customers can reach more than 14,000 ATMs throughout Indonesia.

Appointed country officer in January 2008, Shariq went on to lead Citibank Indonesia where his responsibilities include strategising for business development, regulatory and corporate social responsibility, and dealing with franchise clients.

Recently celebrating the 25th anniversary of his marriage to Seeme, Shariq is the father of two children; 19-year-old daughter, Sabrina, currently studying at the University of California, Berkley, to become a doctor and 17-year-old son Samaih, at high school.

Samaih is also a sports enthusiast actively involved in his school’s basketball, volleyball and softball teams. Like father, like son: Shariq is also keen on sports and enjoys supporting his son when playing for the school team.

One of the lasting benefits of Shariq’s postings in Southeast Asia is the international perspective that his children have gained, as well as a global network of friends. Seeme is an art collector whose broad outlook matches that of her children. The Mukhtar’s spacious residence in Pondok Indah, South Jakarta, is an ideal place for displaying the huge number of items collected over many years. 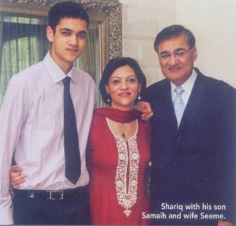 Ancient items made from silver, in the form of plates, mirrors and trays, have the greatest appeal. Most are from Thailand, Cambodia, India and Pakistan.

These pieces were not available openly on the market as she had to search through hidden corners of different cities to find them. Other art in her collection includes some amazingly detailed, photo-like sketches of paintings from well-known Pakistani painter Iqbal Medi.

To Shariq, the weekend means spending time with his family, with activities that range from watching movies to dining out. While Harum Manis, Central Jakarta, is one of their favourite Indonesian eateries, Anatolia in Kemang is where they tickle their palate on Middle Eastern cuisine. “Scusa at the InterContinental MidPlaza is my favourite destination for Italian cuisine,” Shariq adds.

Although he concedes he’s not a good golfer, Shariq likes to play the game around twice a month, mainly for relaxation and socialising with friends or business partners. Rancamaya and Gunung Geulis in Bogor are among his favourite golfing venues.

Impressed by the diverse culture and history of Indonesia, Shariq likes to visit historical sites in the country, particularly Yogyakarta and Bali. “I’m always astounded by the ancient Borobudur temple. The engraving of all the stonework is what makes the temple so fascinating.

“But Bali is ideal for a vacation. I think it’s the most beautiful resort island in the world.”

Although half of all the bank’s offices are situated in the US, the last decades’ presence of Citibank in Indonesia has seen it witness tremendous growth.

While Citibank issued its first credit cards here in 1989, the company was viewed as something of a Cinderella in the region. With additional financial products continually being made available, the bank managed a slow but sure ascent. Although there was a decline during 2008 due to the global economic slowdown, Citi Indonesia reported net profit growth of around 34 and 40 per cent in 2006 and 2007, respectively.

The bank has also won an array of awards, ranging from best credit card and service quality to being declared the best bank in Indonesia by leading global financial media.

All of that leaves no room for complacency, though. Shariq is only too well aware that on the basis of its demographic characteristics, Indonesia presents enormous banking opportunities due to the sheer size of the country’s population. “I wouldn’t be surprised, therefore, if the country attracts more foreign banks in the long term,” he says.

As Indonesia’s financial markets become more open, the banking regulatory framework has become more stringent. However, Shariq acknowledges that at this stage Indonesian customers tend to have a short-term focus when it comes to investment.

“I’m aware that many people like to invest for a relatively short period like 90 days. They don’t look beyond that. This is unlike customers from Taiwan and Singapore, whose financial awareness has led them to think long-term, investing for the future such as saving for their children’s education or retirement. “

Asked what his long-term career goal might be with Citibank, Shariq quickly responds with tempered realism, “To contribute what I can to the corporation so as to handle the global economic crisis successfully!”

Published in The Peak Magazine Indonesia, May-June 2009, as a cover story.