Lenong has been an important part of Jakarta’s comedy scene for more than 600 years. 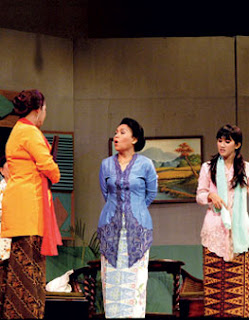 Enjoying popularity for centuries, particularly in the community of Betawi (Jakarta’s indigenous natives), lenong performances have become rare these days. Chairman and play director of Betawi Comedy Foundation, Syaiful Amri is one of the very few who actively organise lenong. There are two principle types: lenong denes (literally means “high-ranking official lenong”) and lenong preman (literally means “thuggish lenong”). The former is designed for socially prominent communities and is presented in more sophisticated dialect with well known stories such as Prince in Bandits’ Lair, Prince and Princess, and Seven Stars.

“There are always genies taking roles in every story,” says Syaiful. The latter is more popular as it uses lower-class jargon. “The performance often presents a comedic narrative about the rich and the poor that refl ects our daily life or a heroic fi gure against the Dutch Colonial in the community of Betawi,” he says.

Both lenong denes and lenong preman are accompanied by the tunes of gambang and kromong, two traditional xylophone-like instruments that are made of wood and bronze, respectively.

The history of lenong stretches back to the early 1400s. “It all started at a Jakarta old market where a group of sellers used to gather to give anecdotes backed by the sounds of tools like spoons and glasses. The
sounds of neng nong from the tools inspired the name lenong,” Syaiful explains.