The most recognized name in pool tables, Brunswick Billiards, has established a presence in Jakarta, aiming to tap into a new market in Indonesia’s lifestyle industry.

Brunswick Indonesia officially opened its first showroom in Menteng, Central Jakarta, at the beginning of this year. 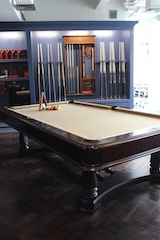 “The growth of the upper class segment and the increasing number of high net worth individuals have paved the way for growing demand for leisure activities in Indonesia. And this is what has built our business confidence to become an authorized distributor for Brunswick products in Indonesia,” said Brunswick Indonesia manager Melly Chandra.

Five types of pool tables are on display at the showroom — namely the Montebello, Camden III, Centurin, Glenwood and Westcott — each of which feature different styles and finishes.

Brunswick is not only famous for pool tables and accessories such as pool cues, pool ball sets and cue racks. The American brand also produces home recreation products such as games (shuffle boards, air hockey, darts and foosball), table tennis and chess, as well as furniture (bars, back bars, bar stools, pub tables and pub shelves). 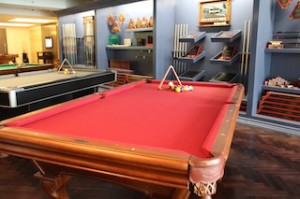 “For 169 years, Brunswick has connected generations while enhancing the billiard tradition. And I’m glad that we are now teaming up with the world’s oldest manufacturer of pool tables and home recreation products,” Melly said.

She added that Brunswick Indonesia was convinced that its presence would be a great means of facilitating Indonesian customers’ evolving leisure needs.

Billiards is one activity that is currently becoming popular among cosmopolitan youngsters and adults in Indonesia’s big cities.

In Jakarta, more hangouts feature billiards as a central activity for visitors. Q Billiard in Senayan City, for example, is gaining popularity not only for its elegant interior design and comfortable setting, but also because the venue uses only Brunswick pool tables. 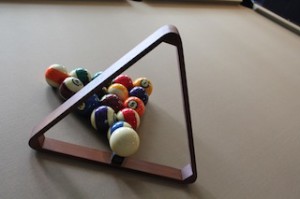 “Billiards as a leisure sport and activity is flourishing, as more Indonesians adopt new lifestyles. And many of them are starting to appreciate high-quality products associated with the game, such as pool cues, pool balls and pool tables,” Melly remarked.

In 1848, Brunswick opened its first sales office in Chicago, followed by the establishment of two factories and a billiard parlor in the city. Later, as the business continued to flourish, the company opened offices, sales rooms and billiard parlors in New Orleans in 1852 and St. Louis in 1859. 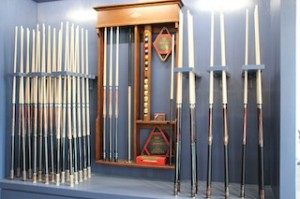 In 1884, Brunswick merged with a rival company to create The Brunswick-Balke-Collender Company, the world’s largest billiard equipment business at the time.

The Brunswick-Balke-Collender Company earned a reputation as one of the most successful businesses in Chicago 1888, and in 1908 the company established its executive headquarters in Chicago, New York, Cincinnati and San Francisco.

In 1912, the company started expanding its global footprint with the establishment of overseas factories in Toronto and Paris, as well as overseas offices in Mexico City, Paris, in addition to Canadian offices in Montreal, Edmonton, Toronto, Vancouver and Winnipeg.

In 1960, The Brunswick-Balke-Collender Company changed its name to Brunswick Corporation (also known as Brunswick Billiards).

When Moses established the company, his fine workmanship was surely what contributed to the lucrative nature of the business. But his simple principle — “We can build it better than anyone else” — was what fueled his spirit to move forward and what enabled Brunswick to establish its presence in many parts of the world.

Text and photos by Aulia R. Sungkar. Published in The Jakarta Post on June 12, 2014.