Jean Etienne Amaury is aware that running a sports event is more than just turning concepts into reality. It requires a solid team in order to ensure that the event runs smoothly. 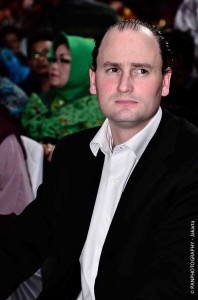 “You won’t be able to create a good team unless you instill a sense of team spirit in each member,” said Amaury, the president of Amaury Sport Organisation (ASO), the largest promoter of sports events in France.

As an event organizing company, ASO requires most of its employees to work outside in the field. Often they have to work long hours. “If they didn’t have the spirit to work, my team wouldn’t perform well. As a leader, I have to be a paragon for my subordinates. So I must have a strong spirit myself in order to build strong team spirit to enhance business performance,” Amaury, 36, added.

Headquartered in Paris, ASO owns, designs and organizes top international events such as the Tour de France and the Dakar Rally (previously known as the Paris-Dakar Rally).

“These events have scored numerous successes, but the biggest challenge is to maintain their successful status. The job is very tiring, so we need to have strong human resources that are very passionate about the events,” he remarked.

His crystal clear advice for better human resources is to have a passion for the work they do to fuel their spirit, which in turn will drive a company forward.

Amaury was indeed born with a proverbial silver spoon in his mouth. His father, Philippe Amaury, and his grandfather, Émilien Amaury, were both publishing tycoons. 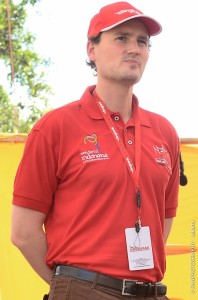 ASO is part of Éditions Philippe Amaury (EPA), the French media giant his father founded that owns esteemed publications such as Le Parisien, a local newspaper in greater Paris, and L’Équipe magazine. His grandfather was the one who initiated the Tour de France, the world’s biggest annual bicycle race. “The newspaper he owned L’Auto instituted the Tour de France in 1903. Later in 1947 ASO took over as the event got bigger. He truly was the man who sold the tour!” the third generation of Amaury exclaimed proudly.

It is hard indeed for a family business to have their third generation in the wings. Failure is frequently due to the inability to maintain the business, he remarked.

“My grandfather started off the business, my father expanded it into a giant, and as the third generation I don’t want to just sit down waiting to inherit the future. I have to earn my own future. My goal is not only to maintain but also to grow ASO. The company’s outstanding reputation is without a doubt our greatest asset. But I always tell my subordinates that a good spirit is another significant asset in organizing sports events. ”

Upon earning his undergraduate degree from École Centrale Paris in 1999, Amaury began his career as an IT engineer developing new media at the London office of Bloomberg News. 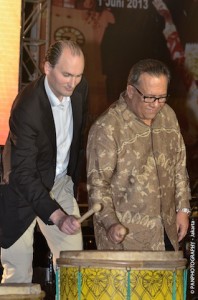 In the quest for better management skills, Amaury took an MBA program at Stanford University in 2006-2007. His father died of cancer in 2006, and his mother, Marie-Odile Amaury, took control of the company until she handed over the position to her son in 2008.

Fast forward to the present, Amaury has not only displayed his ability to maintain the family business, but he is also determined to make ASO go more international.

Under his helm, ASO is actively seeking the opportunity to spread its wings into more events outside France. “It’s time that ASO should start handling more events overseas. We are interested in the Tour of Britain, but I can’t talk much about it now. Asia offers great opportunities for sports events, especially bicycle races. And Indonesia is no exception,” he said.

Amaury was in West Sumatra for a two-day visit during the fifth annual bicycle race of Tour de Singkarak last June, in which ASO had the role of advisor to the event. “It’s my first time visiting Indonesia, and I’m very surprised to see the spirit exuded by the spectators here during the race. The Tour de France is big, but it’s been there for over a century. It’s only the fifth staging of the Tour de Singkarak, and you already have more than 200 cyclists taking part in the event. It’s amazing!” 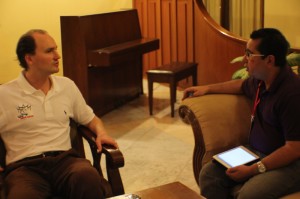 Tour de Singkarak, just like any other bicycle race, is a good way to not only promote the sport but also tourism. “There are many aspects in tourism that sell, from culture and heritage to panorama and food. I have never been to any other part of Indonesia, but I have so far enjoyed many breathtaking views along the race. As for the food, I tried rendang. It’s a little too hot for me, but it’s yummy,” he said with a smile.

Amaury likes to experience various culinary treasures even though he puts Japanese and French cuisine at the top of the list. “One of my favorite French dishes is tartare. It’s minced raw beef. So I had a sudden enjoyment when first trying sushi.”

Hunting for local dishes often becomes part of his travels. He indeed travels a lot. California, Dakar and Tokyo are among his favorite destinations.

“Despite its modernity, I admire how California preserves such natural landmarks as American rivers and the Phoenix Park Vernal Pools in Sacramento. I always enjoy the beautiful wild nature between the ocean and river in Dakar,” he remarked.

Tokyo is fascinating, he said. “While maintaining their traditional culture, people in that city are fueled with the spirit that contributes to the advancement of the city. It reminds me of the importance of infusing that spirit into the corporate culture. It’s the spirit that helps build stronger teamwork.”