A children’s room is more than just a bedroom. It is a place where they grow and the room’s style and interior therefore should be in accordance with the children’s needs. Sania Punjabi shows how she and her husband, Manoj Punjabi, design the rooms of their three children; Sairaa, 7, Nayla, 4, and one-year-old Rehaan. 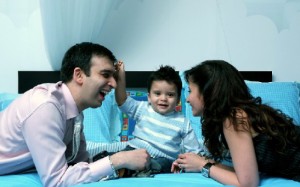 Situated just next to the children’s rooms, there is a study and play area where an array of books and toys are neatly displayed. In addition to desks where Sairaa and Nayla use to do their school assignments and other learning activities at her leisure such as reading and drawing, there are two bulletin boards displaying Sairaa and Nayla’s school works and pictures. “That’s my drawing!” Sairaa excitingly shows her artistically small butterfly object she drew. I cut the drawing in shape so it resembles the real butterfly. “And the Mini Mouse is mine,” Nayla adds.

There is one desktop with printer where both Sairaa and Nayla play game and study a number of subjects using learning software. For one-year-old Rehaan, he has yet to be able to utilize the area to study, but the time will take him there. 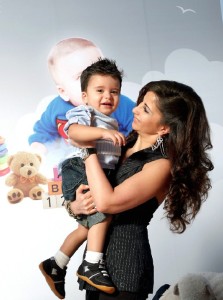 Up in the Sky

Designed with mostly blue, one cannot miss a big mural portraying Rehaan Punjabi’s sitting on the cloud wearing Superman uniform surrounded by toys. “He was just a six month-old baby when the picture was taken. His father wanted a Superman while an angel was my preference, but then I realized Superman fits better for his wall. And the design looks more boyish,” Sania recalls.

Having a full size bed framed in black, the light blue pillow and bed sheet matches the colour of the room’s curtain. With the white sheer curtain favours the blanket, the white colour truly spices up the blue atmosphere in Rehaan’s room.

In the other corner, there are three respective blue, yellow and green kites flying on the cloud. The blue sky’s colour of ceiling creates a spacious ambience for Rehaan.

On the left side of the bed, there is a small table where a small stereo and a police car along with a group of animal toys are placed. “He likes playing with those animals,” Sania says while pointing to zebra and giraffe. “They are just few of his favourites.”

Coloured brown in upper and lower parts and white in the middle, the big closet takes up one side of the room but still leaves a big chunk of space. Rehaan is one-year old now and seems to feel comfortable with the living space where he is growing. 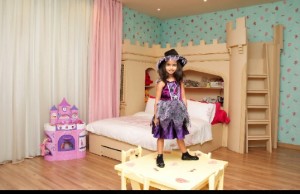 Mr and Mrs Punjabi really know where to take their children realm into a comfy living space. Designing the children’s room often relies on parents’ fantasy and the interests of their children. “If your child is keen on car toys, you can decorate the walls of his or her room with pictures of cars. In this case, Nayla loves beach and sandcastle. So, we want to make what best for her by designing her room resembles to sandcastle,” Sania explains.

The four-year-old Nayla looks happy with her sandcastle designed giant bed that has adjacent small bookcase where Nayla displays her comics, books, dolls and other knickknacks. In addition, the bed has a ladder taking to a battlement from where she can jump to the bed mattress. “I love jumping with my most favourite doll Dora,” Nayla expresses her delight while showing her other part of room. “Look over there. It’s a miniature castle!”

Just next to the wardrobe, the miniature castle stands not far from a mini table with four chairs where she and her siblings and friends sometimes spend their joyous moment playing cards or doing learning activities such as drawing and reading.

Having beach theme wallpaper combined with the pink curtain along with the presence of a big dressing table create a distinctive ambience for the room of a girl Nayla’s age. Child’s interests and room decoration are always interconnected, according to Sania. 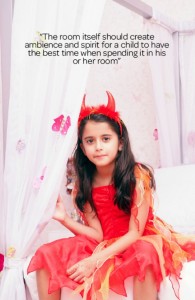 In the Realm of Butterfly

The children room style should represent the character of the children themselves. So, it is also important to decorate the room according to the child’s age. Anyone taking a glimpse of the seven-year-old Sairaa will spontaneously find out that she loves butterfly.

Having her room’s wallpaper adorned with a bunch of butterflies, Sairaa with her cute smile says that she is very happy about her room. “I even put dozens of butterflies on the bed’s mosquito net.”

Sairaa’s room has open window facing the house’s courtyard. And with the pictures of butterflies embellishes all-over the room, it creates perception of being in open space.

Having the same kind of closet as Rehan’s except hers is coloured gray in upper and lower parts and white in the middle, the perfect colour combination still matches those colourful butterflies on the wallpaper. 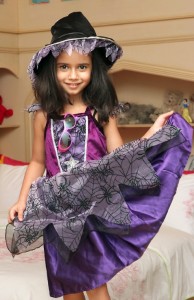 Sairaa loves Disney Channel series of Hannah Montana and High School Musical, as she has two small pillows having those respective images. Despite the room’s pink curtain, the room still looks more into white nuance. “I want each of my children’s rooms to have its own look representing the kid,” Sanai says.

As the mother of three children, Sania believes that the atmosphere surrounds her children’s childhood is an incomparable source and parents should provide not only a snug room for their children, “But the room itself should create ambience and spirit for a child to have the best time when spending it in his or her room.”