Founder and director of Arya Cipta Graha has know-how in the fields of architecture, ranging from classic to contemporary, despite the fact that he has been well-known for his experimental in contemporary architecture. 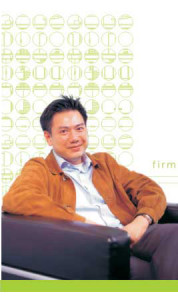 Arya Cipta Graha, which is also known as Atelier Cosmas Gozali, is an architecture company that provides planning and architectural services. Established in 2005, the firm has built an array of designs from house and apartment to office, hotel and resort. This not to mention the firm’s other portfolios in interior and landscape.

In order to create a beautiful contemporary home, Cosmas, who has had 17 years of experience as an architect, combines his crafty thinking with the needs of clients. “Designed to meet the modern needs of people living inside, it is important that an architect understand the concept of comfort.”

One of the concepts being applied by Cosmas is creating studios in a house; each of which is equipped with bathroom and pantry. The building of studios in a house will give not only room for family members to move, but also more privacy. “As people are getting more individualistic, their need of privacy is on the rise,” he says.

Having a comfortable home, nevertheless, does not always need a big space as minimalism has become a trend in contemporary design direction.

Graduated from Technische Universitats Wien, Vienna, Austria, Cosmas has always been interested in architectural objects since childhood. Always having outstanding mark of math during his schooling, Cosmas says that his goal of becoming an architect first emerged when he was in sixth grade.

“I remember my early-teen years when I liked to observe all the buildings I passed when going out with my parents at weekends. And my confidence in reaching my goal of becoming an architect gradually emerged,” Cosmas reminisces.

His interest in architecture has undoubtedly made him an innovative expert. As a matter of fact, Cosmas is the trendsetter in minimalist designs in Indonesia. 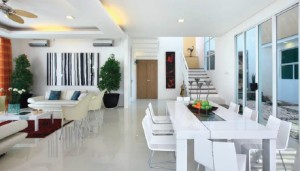 While people were astonished with the beauty of semi-classical architecture during the 80s and 90s, Cosmas was building a house in minimalist style. “It was in 1991 where I designed one of my houses with modest, no profile style with the gray’s door, black floor and simple stair railing.”

An art lover, Cosmas has been an art collector for more than 20 years. Not only does he collect an array of artistic objects like statues and paintings, but Cosmas also owns a gallery in Singapore.

“The fine arts gallery I established in 2004 is aimed to promote Indonesian arts. As you know, Singapore is a gateway to go international. And we have collaborated with galleries from other overseas countries.”

To him, being an architect should include having the values of both artistic and aesthetic. It is no surprise that a successful architect like Cosmas holds the belief of innovation.

“I’m always thirsty looking for something new in building more designs. I believe that all the challenges that I have mean opportunities to create new designs,” Cosmas remarks. “Other than creating minimalist building, I was given a challenge last year when building an office with futuristic style.” 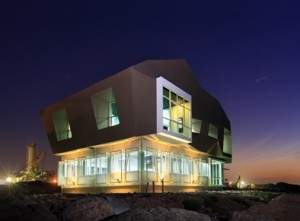 The 300-meter office Cosmas built in Marunda, North Jakarta is a shipping company that also has businesses in stone, sand and magnet. Cosmas then took airspace as the building theme. “So, I created the building with the theme of meteoric airspace.”

Asked his opinion about green architecture, Cosmas cites his current project, Swiss Ambassador Residence, which is planned as green buildings. “Governor Fauzi Bowo declares this project as green architecture. Nevertheless, the concept of green architecture is still difficult to translate in Indonesia because we haven’t set specified standard yet.”

In implementing green architecture, Cosmas follows his logical insights, all of which are adopted from the standards applied in Australia, Europe and North America.

To Cosmas, green architecture means building design with energy efficiency, the use of local materials and no-waste. “In advance countries, the issuance of Certificate of no hazardous waste activity is common. And I’m really hoping that Indonesia will have it in the near future.”