If it wasn’t because of a call of the heart, Inge Rijanto wouldn’t have been a great artist. And through the means of the human body, the eminent Indonesian painter and sculptor Inge Rijanto expresses her emotions. 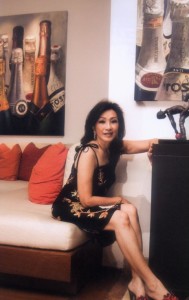 Her former career as a fashion designer has borne a success of being a ‘know-how’ in drawing and designing clothing. However, as Inge then became aware, clothing is no more than the outer covering that summed up in a human body. And despite the fact that the savoir-faire of designing the ongoing fashion is unquestionably a form of art; the body itself is the greatest theme throughout the art history.

This has made Inge evolve her skill of drawing clothing models to figure beneath them, as later she spread her wings into painting on canvases using oil, acrylic as well as casting figures into bronze and fiberglass sculptures. To Inge, human figure is where both fashion and art inspired.

Born in Semarang of Central Java, Inge graduated from Hochschule fur bildende Kunste, a renowned fashion design school in Berlin of Germany in 1971, in which later became her entry ticket to her career path as a fashion designer. As she reached the peak of her success as both fashion designer and businesswoman, she in the end decided to leave her attainment and instead heading to different direction. That was the moment where Inge stepped up to pursue her long stay dream of becoming an artist.

Having a friendly chat with a PMR contributor on the verandah facing a swimming pool at the back garden nestled with greenery plants in her residence in South Jakarta prime area, Inge reminisces her transformation from being fashion designer to an artist in which her creations not only have opened the door to a series of exhibitions nationwide, but in the international scope as well.

In fact, Inge was the first Indonesian sculptor to participate in the 26th Le Salon D’autumne international de Luneville France from September 29 to October 22 last year. And she has been invited to take part in the next event from September 26 to October 20 this year 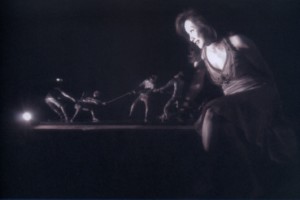 Q: Would you mind highlighting your career journey from being fashion designer turning to painter and sculptor?

A: I always want to learn both painting and sculpture since long time ago, but running an export oriented garment business with 1,000 employees didn’t give me a chance to spare some time to get a grip on learning such artistic skill. I was always tied up with my business daily activities; from schedule of appointments and garment deliveries to business trip.

Only after I decided to retire, I was then determined to concentrate on the skill I’ve always wanted to hone. My knowledge and skill as a fashion designer are really worth of seeds to grow in more direction in the field of art. Joining life drawing and painting class by Teguh Ostenrik, as well as attending sculpture class by Dolorosa Sinaga helped me inculcate in my artistic talent to grow.

The both Indonesian noted artists were very significant to me in pursuing my dream. I learnt from Teguh during my painting class in early 2004 that modeling sculpture was one of the significant subjects. This led to further dig my interest in pursuing three dimensional forms of sculpturing by taking sculpture lesson with Dolorosa. 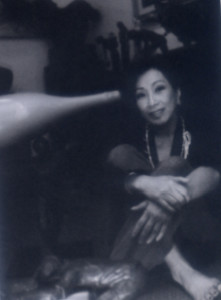 Q: Most of your works are sculpturing human body, would you please elaborate on the reason why you prefer such object?

A: Over the last five years I have made hundreds of sketches derived from drawing human figure models with the right anatomy based on life models in different positions. My former profession as a fashion designer had taught me what matter most in representing the essential proportion and structure of an object. Thus, I began drawing not only flat images, but also moulding forms. And without doubt the form of human body figure has inspired me to encounter more in the study of sculpture.

Q: What is your most favourite work among your sculpting masterpieces?

A: It changes as the time goes by, depending on my ongoing creativity. I like my sculpture “NRIMO” (a Javanese word literally means ACCEPTING). It is a statue of a man holding a globe in his hands that symbolized the Javanese attitude of ‘nrimo’; a well-known concept of Javanese culture to accept everything we deserve to rely on your life to destiny. But if you ask me now, I would say my latest sculpture, “TASTE OF LOAD,” a masterpiece represents a man carrying oversized champaign, which I am going to feature in my next solo exhibition at Vivi Yip Art Room, Jakarta in this upcoming November 8 is thus far my most favourite one.

Q: In your own view, do you think people understand the philosophy behind the creation of your sculpting masterpiece?

A: “Beauty is in the eye of the beholder,” an old phrase that I always look into when it comes to expressing an art object. The old phrase is indeed a philosophy that I believe apply to other people in general. Stretching to the old saying; while some people may not appreciate a masterpiece regardless the value on the object, others may regard it as a priceless beauty. During my exhibition in Luneville, France last year, I sold one of my best creations, ACCEPTING. I didn’t have a chance to explain about the meaning of my masterpiece to the buyers since I never met them. But I believe the reason of buying my sculpture was the reflection of the masterpiece from how they perceive the value of the object. 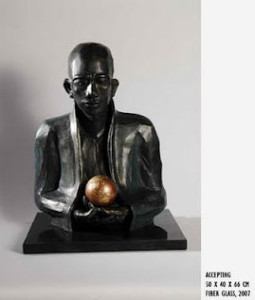 Q: In what way do you want people to see your masterpieces?

A: Well, I create a new masterpiece every year, but my previous creation of ‘ACCEPTING’ has indeed delivered a brief message; try to accept things in life you can’t change peacefully.

Q: How do you see yourself five years from now?

A: With God’s will, I hope that I can develop my skills to be a better artist. Becoming a great and well-known artist takes a long process that requires hard work besides luck.

A: Should I have the chance to turn the clock the other way around, I perhaps would prefer to be a physician the way I could help cure needy people from their sickness.

A: Age is not a big deal to me regardless of the number. More importantly, I want to live as long as I am healthy; so I don’t have to depend on my children or someone else. 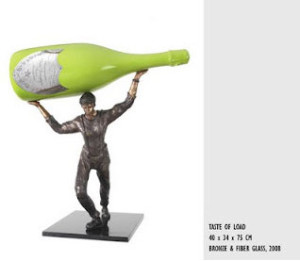 Q: How do you react at the fact that people gets older?

A: Getting older is a natural process. Nobody can change and able to avoid such fact. Indeed, getting older applies to my philosophy. Getting back to my previous answer about the message behind my ‘ACCEPTING’ sculpture, “try to accept things you can’t change peacefully.” The more importantly, I want to get older gracefully.

A: In addition to being a state of mind, age is only numbers. I would advise myself to stay young at heart as long as I’m able to do so.