Ared soldierfish, sheltered in a crevice, is looking bashfully at me with big doll eyes, like a wee escapee from a Japanese anime film. Then silvery trumpet fish with Pinnochio noses shimmy past. 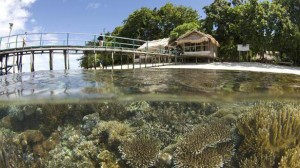 I am hovering above a gloriously alive coral reef in my wetsuit, blowing bubbles and loving the sensation of weightlessness again after a hiatus of long years from scuba diving.

Raja Ampat, meaning Four Kings, is a quartet of islands (Waigeo, Batanta, Salawati and Misool) on Indonesia’s far eastern edge. A holy grail for divers, it is home to the world’s highest bio-diversity of fish and coral recorded by scientists.

Pleasurable options for non-divers are birdwatching or jungle treks, for life is as abundant on land as underwater in the vast 40,000 sq km seascape here.

For four days, I am ensconced in one of 16 contemporary Papuan-style “water bungalows” built over the sea at the Papua Paradise Eco Resort. 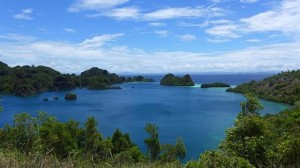 On my huge verandah, I can settle on a chaise longue or glance at the perfectly clear water below to spot baby black-tip sharks and fat neon parrotfish.

The resort, off Batanta Island, is a “shark nursery”. About 200 juvenile predators swim placidly among sea grass, waiting to grow big.

To see these black-tip sharks up close, I simply walk barefoot to the jetty of the resort, and plop into the calm water to dive or snorkel on the “house reef”. 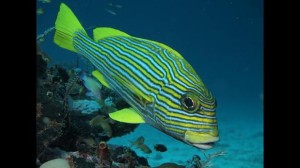 That is where I encounter creatures such as the anime-eyed soldierfish. Also, a giant clam with puckered, peacock-hued lips and, ethereally, a clump of soft pinkish coral tipped with fairy lights.

I spend a long time peering at the tiny, territorial clownfish nestled among soft, stinging anemone. They look me in the eye. Bolder ones dart at this harmless intruder in a one-sided game of bluff.

I fin on. In the warm shallow water, the reefs are sunlit and the visibility is brilliant, so the endless parade of fish and corals are rendered in their full theatrical colors.

I have plunged into a fantasy world, swirling with beauties and beasts of the deep, and that is just the house reef. 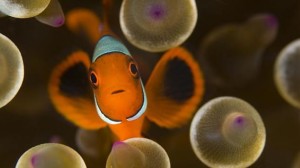 Farther away, 45 to 90 minutes by speedboat, are a wealth of dive sites such as the Fam Islands. There are more than 300 dive sites among 1,500 islands in the region, and new sites are discovered all the time.

Our boatful of a dozen divers and snorkelers venture into the water, which feels primal, crisscrossed by currents.

The resort arranges for dive guides to accompany up to four guests each. I have a personal one, Leah Sindel, 29, an observant Australian who is also operations manager at the resort.

At a site named Anita’s Garden, she immediately points out a green turtle, a fruitful start. Soon, I have the illusion that it is raining fish, for schools of fish are all above and around me. 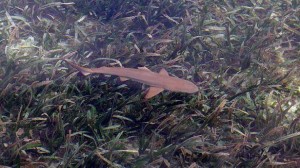 It is exciting to swim around a corner and see coral-munching humphead parrotfish, like a dark patrol. They grow up to 1.3m and weigh as much as 46kg.

These are giants, but tiny fingerlings also abound in the little crevices and chambers of mysterious canyons.

At a massive underwater cliff, Fam Wall, the current is just gentle enough to stir the exquisite coral garden. It all appears idyllic, but really, there are turf wars, hot pursuits, scenes of life and death in every marine wonderland.

In the evening, we swop stories of what we see while refueling with chef-prepared dinners – piquant ikan pepes, tempeh, chicken with cashew, mie goreng, pasta and garlicky dips for warm bread.

Bruce Wehlau, 67, a retired Canadian banker who has dived 27 years with wife Nancy, said, “The coral formations are in incredibly good condition compared to other national parks. Visibility is generally good – 20m to 40m.” 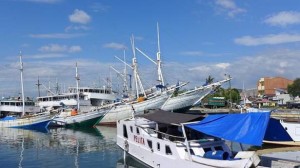 There is varied fish life here, he observes, but not a lot of pelagic or huge fish such as giant barracuda.

Nico Dijkstra, 55, a Dutch IT specialist who has logged more than 700 dives in 12 years in destinations from Egypt to Mozambique to Fiji, describes Raja Ampat in one word: “Paradise.”

He has booked 17 days at the resort and remarks: “The colors of the coral and marine life make it underwater magic.”

Among his highlights are glimpses of three manta rays and the tail of a walking shark which is endemic to Raja Ampat.

Mark Erdmann, senior adviser for Conservation International’s Indonesian marine program, has called Raja Ampat a “species factory”. The isolated and untouched seas here as well as their position between the Pacific and Indian Oceans have triggered a flourishing of species unparalleled on the planet.

More species are being discovered, according to Sea Sanctuaries, a conservation group which works in Raja Ampat.

Paradise is under threat, however, with evils such as cyanide fishing and sediment from poorly planned development.

The hopeful news is that Sea Sanctuaries has already established two protected “No Take Zones” of almost 70,000ha, working with local communities and authorities.

But when I dive, trek to see the distinctive conical green islands here or hear strident birdsong, the idyll is hard to shatter.