By Prasiddha Gustanto. Originally published in The Jakarta Post, Sept. 23, 2017

As a country with centuries-old local food wisdom, Indonesia has enormous potential for creativity and innovation in its food production. Yet much of this potential is either undiscovered or understudied. This can be disastrous for the nation’s food security. 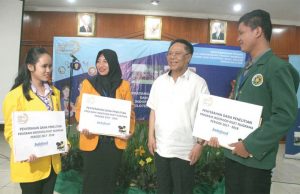 Knowing how to make the best of Indonesia’s rich diversity of local food crops is essential for ensuring that the people at all times have, as per the Food and Agriculture Organization’s definition of food security, access to sufficient, safe and nutritious food that meets their dietary needs and food preferences for an active and healthy lifestyle.

PT Indofood Sukses Makmur (Indofood) understands this necessity very well, which is why it continues to provide funding to gifted students in the field of food and agriculture throughout the country, with the funding and mentorship they need to complete their research on local food.

The company is doing this through its Indofood Riset Nugraha (IRN) program, which since 2006 has provided research funding for undergraduate students so that they can explore creative and innovative ideas in supporting food security through the diversification of local food commodities.

Since the program’s inception, it has received 4,917 proposals from students throughout the archipelago, some 727 of which have gone on to receive IRN aid. This year, IRN has received a total of 215 submissions, which marked an increase from last year’s 148 submissions. It has so far accepted 58 of them for this year’s batch.

The company and these students formalized their partnership during a signing ceremony at a leadership camp held from Sept. 6 to 8 at the Villa Ciloto Indah resort in Puncak mountain pass, Bogor, West Java.

The formalization of this research partnership was conducted between the students, the management of Indofood and a team of IRN panelists, who will give guidance and mentoring to the students during their research.

“We aren’t just giving them money. We are also teaching them how to be good researchers, how to build networks with other researchers, data-gathering techniques and how to arrange and publish good reports,” said Purwiyatno Hariyadi, one of the IRN expert panelists.

“Indonesia does not just comprise Sumatra and Java. We want to focus on eastern Indonesia because we don’t want them to lose out to the west. At the very least, they should be on equal standing with their counterparts in places like Sumatra and Java,” Hariyadi said.

Aside from focusing on students from eastern Indonesia as a way of providing more equal opportunities, they were also chosen because of the subject of their research, namely, sago.

“This is good, because sago is rich in starch, which means that it can function as a source of carbohydrates and can be processed into various forms, such as porridge, noodles and different types of cake,” said FG Winarno, who is head of the IRN panel of experts.

Among the list of student recipients in this year’s IRN program is Bayu Prasetya, a student from Muhammadiyah Yogyakarta University (UMY). Bayu was one of seven agricultural students from UMY chosen as an IRN recipient for 2017.

Bayu’s accepted proposal was regarding the use of eco-friendly pheromone-based traps to control horned beetles. These pests are found on coconut trees in every part of Indonesia.

“The damage caused by these pests inhibits maximizing the potential of coconut production in Indonesia. As such, effective control that is safe for the environment is necessary,” Bayu was quoted as saying in a written release on UMY’s website.

“I am grateful to pass through the selection process and receive this funding. Many people had registered for this opportunity, so now it has become an opportunity for the university, and especially for me personally, to contribute to the academia through research,” Bayu added.

IRN aid recipients like Bayu are required to finish their research within a year. Each will go through an audit process comprising two phases performed by IRN panelists. The first audit will monitor the development of their research as well as provide an evaluation. The second audit is conducted before the final report of the research is submitted.

“We hope that the IRN program can be successful in producing food solutions for the future through research outcomes that can strengthen the wealth of Indonesia’s food,” Winarno said. “We hope that the younger generation of Indonesia can explore, develop and also raise the image of other local food resources that are in Indonesia.”