The birth of Hotel Indonesia had paved the way for showcasing the world the face of modern Indonesia, particularly the metropolitan city of Jakarta. 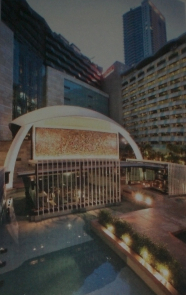 Designed in the form of the T letter to allow guests to view the panorama of the capital city, Hotel Indonesia had hitherto hosted acclaimed international guests. The Cambodian Prince Norodom Sihanouk and the Philippine’s President Diosdado Macapagal were among the hotel’s countless of head of states and international dignitaries who had stayed and enjoyed the top-notch hospitality of the hotel.

Sitting extraordinarily on the corner of Jakarta’s prime area’s roundabout, the hotel is reopened after three years of extensive renovation. With President Susilo Bambang Yudhoyono inaugurated the grand opening on May 20, 2009; the hotel adds Kempinski to the name, facilitating more prestigious values.

Indeed, Hotel Indonesia Kempinski is now on its new perch comparable to prestigious hotels worldwide such as the Emirates Palace in Abu Dhabi, the Baltschug-Moscow, The Commune at Great Wall China, Adlon Kempinski, to name a few.

During its heyday, particularly in the 1970s, Hotel Indonesia was regarded as a status symbol for Jakarta’s crème de la crème.

The oldest hotel chain in Europe, Kempinski Hotels S.A., has brought its expertise to rejuvenate Hotel Indonesia while keeping the originality of existing building design.

Founded in 1897, the German hotel company took the name Kempinski which means luxury at its best. The name is in line with its vision and mission to provide five-star service in a combination of Indonesian hospitality and European luxury. 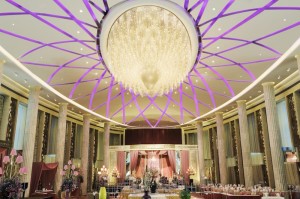 Hotel Indonesia Kempinski has been entrusted to restore and maintain dozens of various artifacts, paintings and sculptures from President Sukarno’s private collection, all of which are dedicated for patrons from all over the world to enjoy.

Visiting the hotel’s Heritage Room is truly a blast from the past. The museum-like room staggeringly displays an array of the historical collections, ranging from paintings and sculptures to the scissors where the late Sukarno used for ribbon cutting ceremony of Hotel Indonesia opening and tea set used in the opening celebration.

In addition, other prominent paintings are artistically displayed in certain areas of the hotel. The acclaimed and most eye-catching one is the Lee Man Fong’s masterpiece. His painting, which is worth more than 5 billion rupiah or around US$ 500 thousand, is displayed in front of the Bali Room.

A legendary oval-shape room which was often used by the late Sukarno – Bali Room – is now transformed into a spacious hall having Indonesian contemporary design and cutting-edge technology. “The LCD mood lightings neatly installed on the ceiling do the colour changes according to client’s requirement. And Balinese-motif wood carving wall that has been decorating the 900 capacity room since year 1962 is still maintained until today at its best condition,” Gerhard E. Mitrovits, Hotel Indonesia Kempinski’s general manager explains.

And for those wanting bigger hall for special occasions, the 3,000 square-meter Kempinski Grand Ballroom should be the one to consider. Nestled on the 11th floor of the West Mall of Grand Indonesia Shopping Town, the grand room is one of the city’s largest function rooms with the capacity to accommodate more than 3,000 guests.

Signature Restaurant is ‘a must’ to visit as it offers a la minute buffet selection for breakfast, lunch and dinner featuring signature dishes from Europe, Asia and of course Indonesia. Adorned with modern contemporary design with historical pictures, the restaurant is surrounded by water-ponds.

“The restaurant’s open kitchen concept reveals the cooking’s secret in a friendly atmosphere,” Hanny Gunawan, the hotel’s communication director says adding, “You should go to Pavilion Ramayana Bar and Lounge to find a rich selection of fine wines and champagnes while indulging yourself in a stunning vibration of the Dome, dancing to the music pulsates.”

Going upstairs to the rooftop poolside, patrons can pamper themselves with the city’s spectacular view while a variety of tossed salads and gourmet sandwiches along with refreshing beverages on the menu will surely tickle the patrons’ palate.

The presence of the modern-authentic-gourmet-Italian dining, Casa D’oro, has improved the wealth of existing five-star facilities in the hotel. This is where homemade Italian food is prepared by the noted Michelin Star Italian Chef, savouring splendid aromas of the Tuscan Hills from the kitchen’s stone oven.

Guest occupying a 512 sqm bulletproof presidential suite is entitled to an array of distinguished top-notch hospitality such as private spa and butler service.

The only luxury hotel marked as historical site in the country, Hotel Indonesia Kempinski boasts of every trivial success. Coupled with the European tradition of elegant service, the Indonesian hospitality has now become warmer.