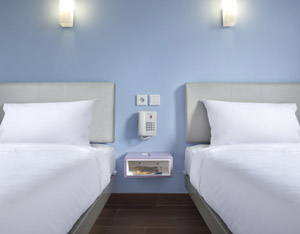 The first half of 2012 witnessed Santika Hotels and Resorts operating 50 hotels, spread throughout Indonesia’s major business cities as well as tourism destinations. Now, aiming to expand its market, Santika Indonesia plans to open an Amaris Hotel in Singapore.

Operated and managed by PT Grahawita Santika, Santika Indonesia Hotels & Resorts include four-star properties listed as Hotel Santika Premiere and three-star business hotels listed as Hotel Santika. The group is currently developing the Amaris brand which caters to a wider client base, from two-star budget hotels to luxurious villa properties. They are also developing brand of unique boutique villa properties with the moniker The Royal Collection under the property names of The Samaya and The Kayana. All of them embrace the hotel’s service principle: “home away from home.”

In July, Santika Indonesia Hotels & Resorts added three more properties to their group. Amaris Hotel Juanda, Jakarta was opened on July 9, followed by Hotel Santika Palu which was launched on July 13 and Hotel Santika Siligita Nusa Dua Bali that opened its doors on July 17. The three-star Nusa Dua property was the group’s 50th property in Indonesia.

The opening of 18th Hotel Santika was commemorated by a 5-km Walk of Blessing from The Samaya Seminyak to Hotel Santika Premiere Beach Resort Bali. It symbolized the group 50 properties, which has been constantly developed since the group first established in 1981. Its 153 hotel rooms and suites are designed with a touch of Balinese artwork. It also features spa, fitness center, restaurants, swimming pool and meeting rooms. The hotel is 30-minute drive from Ngurah Rai International Airport and minutes away from watersport point at Tanjung Benoa.

Bali is one popular island for both domestic and international tourists. Nusa Dua is one popular destination for conferences and MICE events. The Nusa Dua property was built in order to support the upcoming Asia Pacific Economic Cooperation (APEC), which will be held at Bali Nusa Dua Convention Center next year. Aside from Hotel Santika Siligita Nusa Dua, Santika Indonesia Hotels & Resorts has 6 other properties in the Island of Gods namely Hotel Santika Premiere Beach Resort, Hotel Santika Kuta, Amaris Hotel Legian, The Samaya Seminyak, The Samaya Ubud dan The Kayana Seminyak Bali.

The group is planning to expand its properties, adding 25 more in the near future. And the plan includes one property in Singapore.

Schedule to launch in November 2012, Santika Indonesia Hotels & Resorts put forward the Amaris Brand. With a modern concept, this property features minimalistic design with vibrant color scheme. Santika’s first property abroad, which will be located on Middle Road, Singapore, caters to travelers with straightforward needs and uncomplicated amenities. Identified as smart hotel, Amaris is dedicated to give easy and comfortable stay for all guests.

Santika Hotels and Resorts have 5 signature values which are embraced by each of its properties. The values are Indonesian hospitality, family values, local tradition, natural touch and fresh ambiance. That’s why wherever you are and whatever your needs are, Santika Indonesia Hotels & Resorts’ hospitality from the heart will always greet you with pleasure.