The lasting beauty of Edinburgh stands for history, struggle and genuine warmth of Scotland

When I traveled to the UK for the first time, I didn’t think much about other cities beside London. Edinburgh was still at the back of my mind in early 2017 as the hyped movie “Trainspotting” returned for a sizzling sequel. So, I did book my trip, wishing that the supposedly old, quaint city to be as cool and kitsch as the characters in that flick.

The minute I got in and stayed at the Courtyard by Marriott hotel at the outskirts of the Old Town, I was delightfully surprised. It seemed I walked right into a museum city. Cobbled pathways, weathered statues and silent hills on the background welcomed my curious heart. In spite of the rain, I couldn’t stay still and instantly whipped up an itinerary, perfect for either single or couple travelers.

Edinburgh is worth at least a three-day adventure. Don’t expect free admissions to museums and palaces like in London, so better save much if you’re exploring on a shoestring. Perhaps the best thing is to get on a Hop-On Hop-Off bus to get around— it can easily be found at the city center, right by Scott Monument, a beautifully Victorian landmark dedicated to author Sir Walter Scott. Once you get on that bus, it’s time to be selective on which locations to drop off. 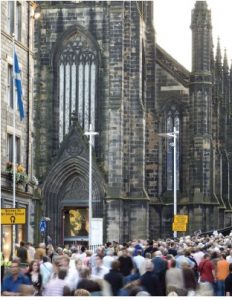 Ladies and fairytale lovers shouldn’t miss out on this 16-century castle. It’s where Queen Elizabeth has to stay when she makes her regular trips to Edinburgh. Almost every location is worth a selfie, including the sprawling garden and the exquisite Forecourt fountain. As you walk up and down the history, spare some time to walk and maybe pray at the ruins of the Augustinian Holyrood Abbey at the back. It’s a spiritually powerful place.

If you fancy walking, set the Old Town as the last stop. During springtime, the way the sunset overlooking the city is sinking beyond Scottish hills is simply breathtaking. Mind you, the city seems geographically positioned on a slope, although that just adds more striking angles to your selfies. Have a local tour guide to spill the beans on antique houses and statuettes.

The cathedral is huge and decorated like the most aesthetic European churches. It’s sitting right at a junction, where a few buskers are ready to entertain any passing tourists. Before the cathedral is the bronze cast of a Scottish duke, named Walter Francis Montagu Douglas Scott—and not Saint Giles of which the religious landmark is called after. Interestingly, the oldest part of the building is said to be the central pillar on top, dating back to the early 1100s. Almost a thousand years away!

Hiking uphill is not for everyone. But once you stand at the peak of Arthur’s Seat, you’ll know why Edinburgh is rather special. If you’re thinking of a proposal spot, then look nowhere else. The sunset hours only make the moment unforgettable. Totally worth the sweat and the trudge against gusty Scottish winds. 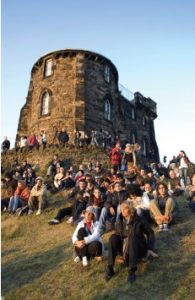 If you still got the spirit to climb up from the previously mentioned St. Giles’ Cathedral, the Edinburgh Castle lies at the back of the narrow alley huddled by tempting whisky pubs. The Castle takes more than a two-hour walk inside, so you’d better prepare your stamina for it. If not, you can view the whole city from the parking area, which is equally mesmerizing.

There are still plenty of other enjoyable destinations, like Princes Street that’s excellent for shopping, Carlton Hill where the city view is stunning, the Parliament Building which “Trainspotting” also features, and many more. This is not yet to include the nightlife, as the locals drink whiskies and beers like there’s no tomorrow, and you’ll be boggled trying to understand the locals’ English. My personal favorite location to call it a night is to grab a popcorn and watch a British film at the Omni Center, close to the Courtyard hotel. The studios are as big as queens’ own suites!