To the Finns, design is much more than just something pretty – after all, Helsinki was the 2012 World Design Capital. 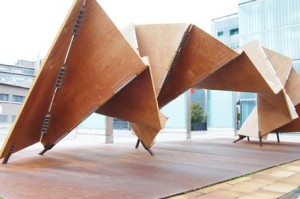 It was no surprise when on a recent visit I saw finessed design elements in rudimentary items from the forksI ate with, glasses I drank from, to chic haircuts and personal street style.

They seemed to be designed effortlessly with a bit of fun and whimsy thrown in.

“What surprised me the most about my visit to Finland is that Finnish design is not just something that you see in the shops of Helsinki. It’s a way of life, and one that reflects their history and innate quirkiness,” observed travel writer Chris Gray Faust.

Helsinki’s sobriquet, “Pearl of the Baltic”, is well deserved. The city’s shoreline curls in and out of harbors and waterways that sleek yachts, water ferries and historic sailing ships share.

Clean-lined Scandinavian architecture is featured in the iconic Finlandia Hall perched alongside Toolonlahti, the city’s central lake. Senate Square houses the snow-white grandiose Tuiomo Church which contrasts with the onion bulb domes of the Uspenki Cathedral.

Ferries take visitors from the docks out to pleasure islands like the widely popular Pihlajasaari or the UNESCO world heritage fortress of Suomenlinna, the 19th-century naval base and garrison, which now houses artisan shops and museums. Finnish design is embedded into everyday life and urban space. Helsinki is a very open city in terms of information flow. There are real-time maps and time postings at bus stations and ferry stops that not only tell passengerswhere their mode of transport is located, but also give an estimated arrival time.

“This is to relieve stress from the anticipation of waiting,” says Milla Visuri of Helsinki Design Week team. The Finns are all about relieving stress through design while embedding design in everyday life.

“The underlining concept is we live here, so we get to decide how we live and make it beautiful,” Visuri declared. The city promotes idea forums where citizens propose ideas for better or more comfortable living situations.

The global popularity of Restaurant Day originated in Helsinki. Four times a year, anyone can fulfill their restaurateur dreams or clink glasses and partake in the bountiful culinary offerings. Locals cook or bake dishes to sell at food stalls on the streets, in parking lots and even out of their apartment windows. Indigenous dishes like reindeer and ligonberries are served alongside Somalian and Argentinian cuisine and other gourmet delights. “Restaurant Day changes Helsinki’s profile by placing the people in the center. [It] is new and surprising. It is culture by the people for the people,” said Anni Sinnemäki, head of the Library and Cultural Committee.

For instance, when the sun doesn’t shine there are artfully designed street lamps that mimic the sun’s light from dawn until dusk.

Winters are harsh. The sun is a no-show for 51 days, from December to early February. During the period of prolonged darkness, the artificial light serves to brighten the resident’s spirits. Design is from a user-driven perspective. No matter the weather, Helsinki will still function.

Walking through in the Arabianranta district art and design can be seen everywhere. The district has thousands of artworks by 200 different artists.

Showcasing artwork like giant birds etched into the concrete sides of buildings and wall installations mimicking waves running perpendicular to the Baltic Sea.

Arabianranta is internationally an important design concentration. Here, you see a residential area where design truly merges with everyday life. It is not enough just to appreciate nature’s beauty, but artists have infused sophisticated artwork in the outdoors effortlessly.

The Suvilahti area is quickly becoming a cultural epicenter for performing arts and expressive street art. Locals of all ages enjoy the pulsing artistic environment in western Helsinki. Colorful murals decorate once worn-out walls and faded industrial buildings. There is even a circus that conducts classes in juggling, trapeze, high-wire walking and other circus acts.

Good design is everywhere in Helsinki. Art lovers get their pick of the litter from diverse and active selections. Design shops, clothing stores, furniture, crockery and utensils all yield artful inspirations.

The city does have a chic outer veneer, but underneath it pulsates with a warm and welcoming heart.

Words and photos by Diana O’Gilvie. Published in The Jakarta Post on June 16, 2013.