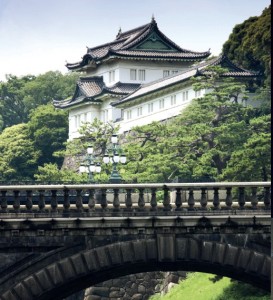 The world’s largest metro area and most populous city, Tokyo offers a unique destination. Apart from its excellent eateries, fun entertainment centers, fabulous shopping venues and other related cosmopolitan excitements, the concrete jungle of Tokyo is also a garden city.

Despite blending into the rhythm of the city’s busy scene, Tokyo residents are accustomed to creating gardens in small public spaces outside apartment buildings, shops and houses. The city is very conducive to green living. Even a crack in the sidewalk can be a place to grow flower.

Holding the distinction of having the highest concentration of historical gardens, this Japan’s capital city is scattered with beautiful green spaces.

Tracking down the city’s spots of green living, visitors are taken to discover the Edo period (1603-1867), during which Tokyo was known as Japan’s horticultural center. In that era, nurseries raised cultivars for distribution throughout the country.

In the mid 1800s, the Edo period was regarded as a well-watered garden city. In the late 1800s, the British architect and garden designer, Josiah Conder, recorded the number of stunning estates and gardens. Amazingly, some of these green landscapes still exist in Tokyo today.

Tokyo also houses many contemporary designs with green architecture concept. Among them are Canadian Embassy Garden and Mandarin Oriental. 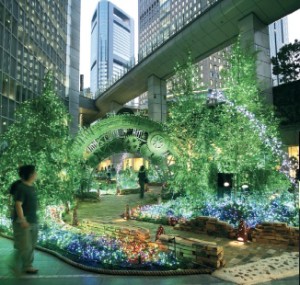 The paragon of a megalopolis eco-living, Tokyo pampers its citizens and visitors with the urban convenience. In Tokyo, sustainability is translated to a number of the following amenities: rail and subway lines provide fast, convenient and cleanliness. Stations are connected to residential neighborhoods by “shoutengai” (pedestrian-only commercial streets) and “roji” (a web of small streets and alleys). Residents make their own small gardens, be it in front of their houses or apartments, and on balconies. And getting around the city, you will find many rivers and parks.

Urban gardening in Tokyo is very common. This has led to many creations of green spaces in the city’s dense urban areas. Tokyo residents have amazingly created a sustainable metropolis that connects urban residents with surrounding greenery.

Tokyo is truly an exuberant experience for visitors worldwide. The city is also known as the art hub with many museums displaying a myriad of Japanese artworks. As for shopping, don’t ask…as the city is scattered by numerous great shopping venues.

The more you explore Tokyo, nevertheless, the more you understand why one should not judge a book by its cover. Inside the megalopolis of Tokyo lies in not only modern buildings with the scene of people with energetic life, but more interestingly, a green lifestyle that redefines the meaning of a cosmopolitan life.