“We are investing in people. They are the integral key to a very successful business,” said Gary Steel, head of human resources and member of the Group Executive Committee of ABB Group.

Headquartered in Zurich, Switzerland, ABB is a Swiss-Swedish multinational company with key businesses in the power and automation technology areas.

During his short visit to Jakarta in early February, Steel said that to be able to invest in the right people, a company should proactively enhance the skills of its employees by focusing on three important elements, which are business excellence, talent management, and rewards and recognition. 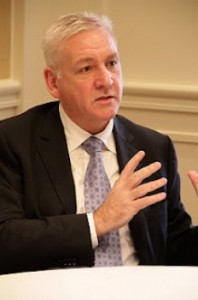 He remarked that the essence of business excellence would not be achieved unless employees understood how to transform their skills into delivering service excellence.

To help meet the objectives of a business, Gary added that a company should develop its internal and external potential through various means such as training programs and workshops.

“This is very effective to unearth the potential of employees so they can contribute to the growth of the company. And that’s the goal of Talent Management. Once the goal is achieved, the company should consider giving the employees rewards and/or compensation.”

Back with a 120-year heritage, ABB currently operates in over 100 countries and employs around 120,000 people throughout the world. ABB has been in Indonesia for 25 years with branches in Jakarta, Medan, Balikpapan, Pekanbaru and Batam; factories in Cibitung, Tangerang and Sunter; and a workshop in Surabaya.

ABB has set a five-year strategy, which is very financially driven. During 2009 and 2010, the company redeployed $5.7 billion worth of capital, mainly with acquisition of companies in the US, Canada, India and some smaller acquisitions in China.

“The strategy is expiring this year and we will implement another five-year strategy focusing on two components; a business and culture objective,” Steel added.

In the business objective, he said that there would be a much higher level of income that the company could derive from service businesses. “We are aiming at renewable [energy] and are making acquisitions in that area. One example is to transfer wave energy into electricity. We are also looking forward to growing together with emerging countries including Indonesia.”

As for the culture objective, Steel said that ABB would like to promote a culture of inclusive leadership. “In other words, everybody in the company is a leader.”

According to him, being a good leader is alignment. “A good leader develops people. Good people regardless of where they come from want to work for great companies that are successful. Good engineers want to work with leading edge technology. Bottom line, good people want to work with a good leader. The fundamental value here is that good leaders are judged by the way they develop people,” he explained saying that ABB has over the last eight years invested a lot of time, effort and money in building a single model of leadership. 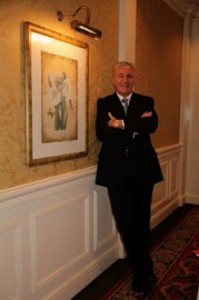 At home Steel balances his roles as husband, father and grandfather. Married to Debbie, the couple are blessed with two daughters and a son; 27-year-old Niki, 21-year-old Rozie and 19-year-old Callum.

What cheers up Steel and his family is the presence of his three-year-old granddaughter, Olivia. “We call her by her nickname Ollie. I spend most of my free time at home playing with Ollie.”

Steel enjoys both music and sport. He likes to sing and play the guitar. “I play tennis and am into soccer. Glascow Ranger is my favorite.”

When asked about his view on the relationship between leadership and culture among Indonesian employees working at ABB, Gary replied, “Honestly, I don’t know much about Indonesian culture in general, as this is my first visit to the country. But we have run the ABB leadership challenge program in about 50 different countries for 50,000 different individuals in 15 different languages. Based on what I have observed, I believe that there are no cultural differences in leadership within ABB. So, Indonesian employees can have the opportunity assuming the market is there. You cannot give people prospects if you can’t build a market. And I notice there is a strong market in Indonesia. So, anyone who joins ABB from Indonesia will be given the same opportunity as ABB’s employees from all the other countries in the world.”
By Aulia R. Sungkar. Published in The Jakarta Post, March 12, 2011.