Parents should realize that in general children at an early age have little interest in studying. However, giving children a good education is very important since the learning fundamentals of early human development during childhood are essential to determine a child’s future success, intellectually and emotionally. 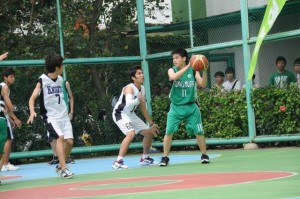 Consequently, in meeting the high standards of education, particularly for affluent parents, the values of international education have become the basis in raising children.

Rachel Groves, the Primary Years Program principal at Sekolah Tunas Muda, said that a child’s future lifetime of peace and harmony is started by learning the values of respect for oneself and others, as well as appreciation of diversity.important that these values be introduced in the early years so that children can be steered into being integrated part of their lives.”

Groves believes that being an International Baccalaureate (IB) World School, Sekolah Tunas Muda has set standardized values and attitudes toward educating children at an early age. “Our students, particularly those in kindergarten and early primary levels, learn these values through their daily activities in school.

“Painting a big picture together in a group will enhance the children to become more cooperative and value other students’ ideas. Clapping when a classmate sings in front of the class teaches the children to show appreciation, and asking an upset friend if she or he is OK helps the children develop empathy,” Groves said while citing examples, saying that if these important values are nurtured in children from a very young age, they have the potential to prepare the children to play their part in changing the world. 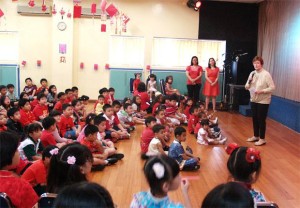 Nurturing international values in young children should also include giving them a good understanding of what is right and wrong. Sekolah Bina Nusantara (Binus) Primary Years Program Coordinator Richel Langit-Dursin said, “Knowledge, concepts and skills alone do not make an internationally minded person. Being an educated person means being guided by values and beliefs, as well as connecting the lessons of the classroom to the realities of life.”

Designed for learners aged three to 12, the IB Primary Years Program focuses on the development of the child in all areas of learning. Dursin said that the IB program was implemented at Binus as it ensured a high standard of international schooling where the student is an active participant, not a passive recipient.

“Inculcating international values among children, however, should not be the responsibility of schools alone,” she said, adding that,also play a key role in molding their children, where common values such as showing respect and care can be taught at home.”

It is true, though, that children are good imitators, as they can easily absorb influences from their parents, friends, teachers, maids or whoever is present in their everyday lives. “Thus, it is essential that parents, not only teachers, model good behavior,” Dursin asserted.

Penny Robertson, the Australian International School (AIS) principal, remarked that some schools do not have sufficient relations with the parents. “We believe that feedback is very essential in fundamental learning for children at an early age. And in order to share about the progress of each student, AIS regularly holds both formal and informal meetings with parents.” 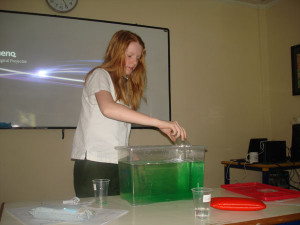 In addition, the AIS Parents and Friends Committee (P&F) plays a significant role in promoting a strong school community, such as by organizing fund-raising activities to improve AIS facilities and resources.

Robertson said that money raised by the P&F has effectively been spent for the benefit of AIS students on educational materials, activities and other school projects.

Applying one of the best international curricula, Australian education has attracted many parents wanting international values instilled in their children. From Kindergarten to Year 6, the school’s integrated curriculum has succeeded in molding its students to be innovative and creative learners. Placing priority on English Language, Science, Studies of Society and Environment and Math, “We believe that our education system places great importance on implanting early age children to develop the ability to think creatively and independently,” Robertson said.

Many parents have high expectations for their children after seeing the rich values to be obtained through international education. Patricia Koh, a Singaporean expert on early childhood and founder-director of Pat’s Schoolhouse, said that regardless of what curriculum a school uses, it is usually the teachers who have the ability to make the curriculum either interesting or boring for their students.

“I can turn any boring information into creative curriculum and yet maintain good class control and gain respect from the children,” Koh declared.

From birth until about the age of five is a significant time in child development. This is the period in which a child’s language ability, motor skills, adaptive abilities and social-emotional functioning take root.

This is the moment that will determine whether a child does well in school and becomes a successful member of society. Without support during their early years, children are more likely to fail in their future academic lives and face obstacles in integrating into society.