Blessed with the right leadership savvy, mobile telecommunications veteran Hasnul Suhaimi tells Aulia Rachmat he’s confident of taking the company he leads to the next level. 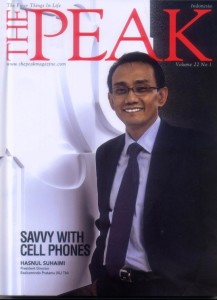 With a youthful appearance, people often assume he’s a lot younger than his 51 years. Don’t be fooled by appearances, though, for soft-spoken, easygoing Hasnul Suhaimi is the mastermind behind an aggressive business strategy currently being rolled out by PT Exelcomindo Pratama (XL), the third-largest cellular phone operator in Indonesia.

Although it has only been two years since he took the XL helm, the company’s market share has grown from 12 to 18 per cent – a significant jump mainly attributable to Hasnul’s bold leadership and shrewd strategy.

An avid golf player, Hasnul has even installed a mini indoor putting green in his office, which he sometimes uses as a quick escape from office routine. But for the real thing, Gunung Geulis and Rancamaya in Bogor are where he usually plays. Also among his favourites are prestigious courses like KLGCC in Kuala Lumpur, Tanahmerah and Sentosa in Singapore, and Shenzhen in China.

Having travelled to all continents except South America, Hasnul says that France is his favourite overseas destination. “Paris is great for shopping, while Cannes offers beautiful landscapes and is a superb golfing venue.”

Highly motivated and self-assured, Hasnul expresses confidence that his strategy will propel XL to a stronger market position. Owing to a significant increase in the number of XL subscribers from fewer than 10 million to around 25 million within the last two years, he exclaims, “Why shouldn’t I be optimistic that XL will overtake its closest rival in the near future?” 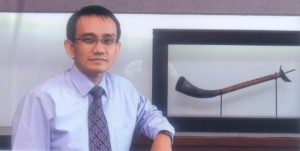 FROM THE BOTTOM UP

Good leaders are easier to define than to find. Ideally, the person should not just lead via talk but also through the sheer force of motivation when inculcating a high-performance culture in his or her subordinates. Hasnul is only too well aware that creating a solid infrastructure within XL is of great importance in order to keep the company afloat.

His leadership savvy is a product not just of work experience but his prior educational background, too.

Aside from earning a bachelor’s degree in electrical engineering at Bandung Institute of Technology (ITB) in 1981 and an MBA from the University of Hawaii, in 1992, Hasnul absorbed the benefits of short courses such as in operation and maintenance in Munich, Germany, and marketing telecommunications in Singapore.

Hasnul decided to leave his hometown after being accepted at ITB in 1976. It was where Indonesia’s first president, Sukarno, a hero to Hasnul, earned his bachelor’s degree in civil engineering.

“Just like my late father, I admired Bung Karno since I was a kid. He was a great leader; I remember my father used to tell us children how he was mesmerized by Bung Karno’s motivating speeches,” he recalls.

In describing his leadership style, Hasnul says that he positions himself at the very bottom within the company hierarchy yet is the most responsible person at XL. 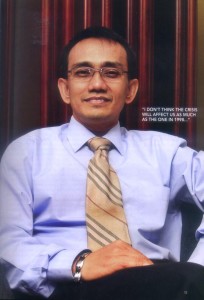 Hasnul, who once was declared Cellular Man of the Year 2005 by the Indonesian Journalists Association, says that the structure of a company should take the form of an inverted triangle: “This is how I support my subordinates towards becoming team players. Employees who face customers directly deserve higher esteem as they are the front-liners, the public face of the company.

“At XL, customer service representatives and marketing staff are on the top, pushing the company higher with various products and services while being supported by the technicians who position themselves in the middle. In turn, the top management and board of directors are on the bottom, supporting the latter.”

The recipient of the Outstanding Entrepreneurship Award 2008, Hasnul explains XL’s success has been achieved through effective marketing strategy that answers customer demand for cheaper telecommunications.

Having engaged aggressively in a price war with its competitors, XL began to cut its rates in July 2007. The strategy has shifted the company from a high rate/low volume operation to high volume/low rate.

“XL started its Rp 1-per-second campaign in July 2007, which slashed its call rates from Rp 25 per second. Owing to this strategy, XL’s performance soared in terms of revenue and subscribers. The company’s cheapest available headline rate is Rp 0.1 per second,” Hasnul explains. (This is, of course, subject to conditions specifying duration of calls and the points within a call at which the rate applies.)
As far as the current ongoing “price war” among mobile telecommunication providers is concerned, Hasnul feels that competition is a natural phenomenon. Any business competition has the potential to spur further development.

But the more important thing, he says, is that Indonesians should have the benefit of good mobile service provision. From the perspective of the company’s aggressive strategy in the price war, Hasnul says, “XL subscribers have now been enjoying the lowest mobile rate in the world (according to Morgan Stanley).

“While there has been an increase of only 10 per cent in the mobile telecommunications industry nationwide, XL is pleased with the fruits of its aggressive strategy, as it has enjoyed growth of 50 per cent in revenue.

“We have been pioneering cheap rates since early 2007, which were then followed by other operators. The strategy increased the number of subscribers and average revenue per user,” he continues. 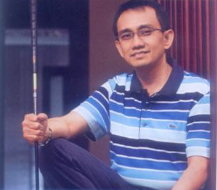 Of course Hasnul’s long-term goal is for XL to become the biggest cellular operator in Indonesia. However, if that sounds rather ambitious for the time being, he adds: “Despite the decreased percentage of the biggest operator and XL’s 50 per cent incremental gain in market share, it’s a long shot for XL to be number one. However, I’m optimistic that the number-two slot is achievable.”

The word “impossible” doesn’t seem to exist in Hasnul’s dictionary, as he always seems to look on the bright side. Even amid the current global economic crisis, he views the situation optimistically.

“I don’t think the crisis will affect us as much as the one in 1998 due to the country’s better macro-economic fundamentals and larger foreign currency reserves. Particularly in the telecommunications sector, the economic slowdown will not hit us too hard since people will always need to communicate.”

While no great art lover, Hasnul nonetheless appreciates good paintings, especially those depicting scenery at his homeland in West Sumatra. Ngarai Sianok (a gorge near Bukittinggi) by Wakidi is one of the paintings he treasures most.

He is a movie buff, though. He watches at least one film every day after work. Not one to go to the cinema, he prefers to watch them on satellite TV in the comfort of his home. “I like dramas and detective stories with a little action; not war or too much violence,” he adds.

As in life, so in business. Life is not all work and business not all profits. So, at XL under Hasnul, research and development (R&D;) and company social responsibility (CSR) provide an important balance. In the R&D; area, XL gives its employees opportunities to channel their creative ideas to boost productivity and to develop more efficient management.

XL has, for a long time, implemented a series of CSR programs in the education and health fields. These include the building of nine school libraries in Aceh after the tsunami and raising funds for natural disaster relief such as severe flooding in Greater Jakarta in early 2007.

Away from the pressures of the office, Hasnul says that being up close to his wife and children is of great importance to him. Despite his extremely tight schedule, he still finds time to share convivial moments with them.

Ryan also likes to play golf. “Spending a day with him on a course really helps to cement the father-son relationship,” Hasnul observes. “Also, dining out with my family at Japanese and Korean eateries is an incomparable source of happiness for me.”

Hasnul acknowledges that many people face difficulties in balancing work with family. The key, he says, is a commitment to good planning and time management: “Leadership is not only about managing subordinates and getting the work done; it’s rooted in your ability to manage your own time.”