Jakarta, like any world capital worth its salt, offers culinary delights from across the globe as chefs descend on the city in search of opportunities and challenges. We spoke with three of Jakarta’s top chefs, who shared with us some of their cooking secrets and their favorite recipes. 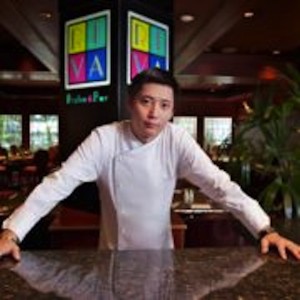 Mickael Do Van is the newly appointed chef de cuisine at Riva, the Park Lane Hotel’s French restaurant. The native of Paris says he looks forward to blending his contemporary creations with Riva’s classic signature dishes.

Do Van arrived in Jakarta in January for what is his first stint in Asia. “I haven’t had a chance to explore the city yet, but for sure I can tell that I will love the city,” he said. “I like the city’s vibrancy, despite its notorious traffic.”

Only 27 years old, Do Van has already enjoyed a number of career highs, including working at Michelin-starred restaurants in Paris. These included Le Cinq at Hotel Georges V under Chef Eric Briffard, Les Ambassadeurs at Hotel de Crillon under Chef Jean-Francois Piege and Jacques Cagna Restaurant and Ambroisie Restaurant under Chef Bernard Pacaud.

“Working at a great French restaurant like Riva really excites me. Therefore, it is important that I always choose the best products for my dishes, so as to deliver the best to our guests,” he said. “And I’m keen on sharing with my staff my know-how in the art of cooking fine French cuisine.”

Riva opened in 1998 and has earned a reputation for serving exquisite French fare. The restaurant has a classic style and a warm ambience. The open kitchen gives guests the chance to enjoy the live cooking. Among Do Van’s recommended dishes are Marbre de Foie Gras, a la Truffes et Aux Deux Celeries (Marbled Foie Gras with Truffles and Celery) and Pommes de Terre Caviar with Yabbies.

With Do Van helming the kitchen at Riva, the menu has been spiced up with more contemporary dishes that still possess that traditional French finesse. 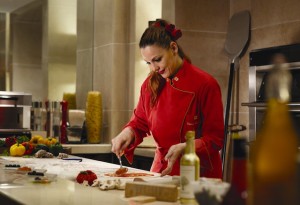 Hotel, the passion and excitement come in the warmly elegant ambience of the restaurant and the impressive menu presented by Oriana Tirabassi, one of only a handful of female chefs in the male-dominated industry.

Tirabassi, an Italian native, joined Shangri-La in January 2011, bringing her passion and creativity, and her mastery of authentic Italian flavors. “I try not to limit myself when it comes to food. Italy is my pride and food is my passion,” she said. “I’m here in Jakarta as the ‘face of Italy’ and I try to reflect that through my

cooking. Italian food is not only about pasta and pizza. The Italian style of dining is a feast where you enjoy antipasti, soup, pasta, meat, cheese, sweets and, of course, wine.”

Her recommendations from the Rosso menu include the Rosso Salad, marinated salmon, angel hair pasta and the oven-roasted New Zealand lamb chops.

“I only deliver handmade pasta because it has the pleasurable toothsomeness that changes the way we appreciate the dish,” Tirabassi said.

She is just as enthusiastic about Rosso. “I like the restaurant’s red ambience, which gives a feminine touch and adds a unique point in this male-dominated profession.”

Asked about her impression of Jakarta, her response is quick and forceful: “I love it! The city is becoming more and more a melting pot. I have a fashion design background and I love shopping for clothes, decorative items and flower arrangements, and Jakarta has them all.”

The former fashion designer shifted gears into the culinary world after becoming the first woman to win the Pizza World Championship, which she did in 1994 in Las Vegas, the United States.

The kitchen at Katsura, a Japanese restaurant at the Plaza Senayan shopping arcade, is run by chef Tatsuya Sakamoto, who creates a variety of authentic sukiyaki, shabu-shabu, teppanyaki and robatayaki dishes.

His secret? Sakamoto says it’s all about using the freshest ingredients to get the genuine taste of the dishes. “That’s why we have all the high-quality fresh ingredients and special Kobe beef flown in directly from Japan,” he said.

Katsura opened in 2008 and is now a favorite for lovers of authentic Japanese cuisine. It is particularly popular with Japanese expatriates looking for a taste of home.

“We use an iron griddle to cook the teppanyaki. It’s an original Japanese grilling style,” Sakamoto said. “We also have robatayaki on our a la carte menu. It’s an ancient Japanese grilled dish, but we have yet to use the robatayaki grilling method. The method is actually simple, but it takes years of practice before you can master it. The method remains very traditional and refined skills are needed to maintain the original taste and circulate the heat during the grilling process.”

He said a new restaurant, Iseya, also run by his team, would soon open at Sampoerna Strategic Square serving fish, beef and chicken using the robatayaki grilling style. He was coy on when Iseya would open its doors to diners, but the management indicated that it would be within the next one or two months.

The chefs were speaking to Aulia R. Sungkar.