While every French region is proud of its cuisine, Stéphane Buron has turned his innovative culinary approach from his corner of the Alps into a special taste of France.

Buron is the winner of “Meilleiur Ouvrier de France 2004” and “Trophy of Gastronomy” as “Best Chef of the Year 2013”. His very own secret recipes have enabled the multi-award winning chef to maintain his two Michelin-star status at the helm of renowned Chabichou in the ski resort of Courchevel, Savoie, one of the three valleys in the French Alps where he was born and raised.

“My passion for travel has influenced my recipes and cooking style. From my stay in Florida, the US, to preparing a meal for chefs at L’Osier restaurant in Tokyo, I notice that people from across the world are starving for more innovative food. So I develop my cooking techniques with more flavors to enhance the taste yet maintaining the traditional French gastronomy,” Buron, 50, explains. 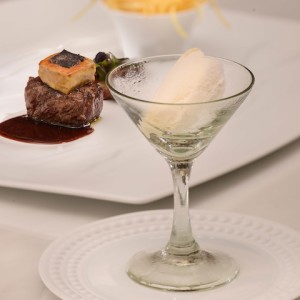 French and Pan-Asian restaurant Orient8 at Hotel Mulia, Senayan recently flew in Buron to fete Jakarta’s foodies with his culinary creations that are best described as authentic French fare with a global palate.

Over three days at the Orient8, the chef presented a choice of his two signature French set menus for both lunch and dinner, each respectively listing six and nine items. 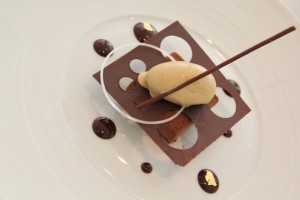 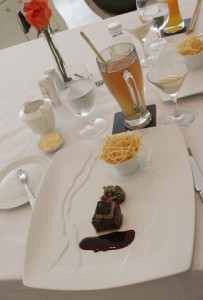 The star of the menu, for both lunch and dinner, is le bœuf “souvenir d’enfance”. Inspired by his childhood memories, Buron presents the combination of wagyu beef rib eye, beef tartar and foie gras carpaccion; paired with scallion sherbet and straw potatoes. Making main course more flavorful, especially for Indonesian palates, is the addition onion ice-cream.

“I called the wagyu beef rib eye my childhood souvenir. When I was young, I discovered the many tastes of my grandmother’s home cooking. That’s the beginning of my discovery that later led me to create innovative recipes,” he reminisced.

Combining the Jakarta’s Orient8’s distinguished service with a touch of France was one distinct way of savoring Buron’s very own secret recipes.

“But make sure don’t leave the table before trying my le carré velours chocolat. It contains hazelnut dacquoise, valrhona chocolate ganache and coffee-caramel ice cream,” he said, adding that pairing this dessert with tea or coffee was a must try.