It’s a well-known fact that the world’s most renowned construction projects, monuments and buildings have historically been built to celebrate something.

To commemorate the past, in other words. 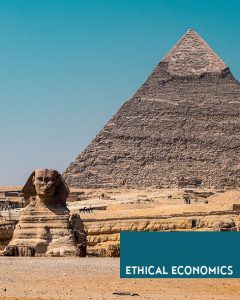 Whether they are ancient works, like the Great Pyramids of Giza being used to celebrate the glory of the Egyptians pharaohs, or more recent creations like Gateway Arch in St. Louis, Missouri, (built to mark the westward expansion of the United States), it is generally understood that famous landmarks very often tell great stories about the past.

But did you know that such ambitious landmarks can also be used to predict the future?

More specifically, they can give us accurate ballparks on when you can expect the next peak of the current real estate cycle.

Knowing (or at least having a good idea of) when this peak will take place is essential. Because the next economic downturn is going to be a real beauty.

And if you’re on the right side of the next downturn, it could be rather rewarding.

“Our most reliable indicator”

Nearly two hundred years’ worth of documented history has shown that the peak of every real estate cycle (since 1837) is signposted. It’s marked always by the opening of the world’s tallest, biggest, widest, or most expensive ever construction project.

In fact, this is our “most reliable indicator” of all.

After all, the existence of these types of buildings (which are speculative projects built almost entirely with other people’s money) reflects ever-escalating land prices that drive cities to expand upwards and outwards continually.

And as land prices go up, so too does the need for taller buildings. That’s to offset the cost of building a square meter of lettable space.

This is what in economic circles I call the “Cantillon Effect.”

It’s named after Irish banker Richard Cantillon. He was perhaps the first economist to recognize that a change in the supply of money and credit affects the economy through the changing of prices and economic expansion.

Cantillon noted that the issue of credit is ultimately almost always overdone as prices rise and imports increase.

Some historic and current examples

As proof, consider the opening of the Singer Building, which was the tallest building of its time, in 1907. What happened in 1907? The US Banking Panic.

Or, let’s take a look at the opening of the Empire State Building in 1931. That was the year of the Great Depression.

The Empire State building held the record for being the tallest building until the very early 1970s. (Another real estate cycle peak.)

Or how about the fact that the opening of the Sears Tower (which held the title of the world’s tallest building for a quarter of a century) in 1973 coincided with that year’s historic Oil Crisis? And recession.

Now we arrive at the 2000s. The Burj Khalifa Tower in Dubai was officially classed as the world’s tallest building on 21 July 2007. The very day of the stock market high in New York.

What about the future?

Consider the following question: What do the years 2026 and 2027 have in common?

They are the years that the developers of many newly-announced ambitious building projects estimate will see their projects reach completion.

There are many highly ambitious construction projects around the world with estimated completion dates in 2026 and 2027.

More recent headlines this year have also announced new buildings and structures. The aim is to break architectural design records by the next two years, which will indicate another boom – and bust – cycle.

July, (2021) for example, saw the announcement of the Marina Tower, a 45-floor skyscraper that will contain 200 apartments and is set to be the tallest building in Greece, with an estimated 2026 completion. Of course, with this being the 2020s, sustainability is in vogue.

As such, announcements for these ambitious, record-breaking buildings have typically come packaged with eco-friendly flairs.

Speaking of the Marina Tower, Odysseas Athanassiou, the CEO of Lambda Development, the property developer, had this to say, as quoted by greekreporter.com on July 7:

“A unique building for Greece and the world, an architectural landmark, with ‘green’ as its central axis, respect for the environment, and quality of life.”

Earlier in the year, there was also the announcement of the 749-foot ‘Bentley Residences’, the very first high-rise by Bentley Motors. That’s set to be completed in 2026 and aiming to be the tallest residential tower on a U.S. beachfront.

And once again, an emphasis on sustainability was a big part of the building’s announcement.

What does this all mean?

First, it means that you should keep the years 2026 and 2027 in mind, as it’s when you can expect the upcoming peak for the current cycle.

It also means you should use the present time to adequately prepare yourself for the usual land-price-led downturn that will come after.

It’s all contained in The Secret Life of Real Estate and Banking by Phillip J. Anderson. You can buy yourself a copy, right here