Jaunting through the top sights of Asia’s world city

MasterCard’s latest Global Destination Cities Index has listed Hong Kong as one of the world’s ten most popular cities for travelers in 2015, with over 8.6 million international visitors coming to this China’s special administrative region in that particular year.

Dubbed Asia’s world city, Hong Kong is proud of its global cultural diversity and its position as a leading financial center in East Asia. But what make the city win the hearts of travelers are its breath-taking landscape, fun activities and entertainment, and its popularity as one of the world’s top shopping destinations.

My last trip to the city allowed me to indulge in its hip and happening with the following sights dubbed as the best of Hong Kong: 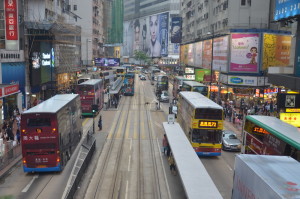 I started my city exploration by strolling along Nathan Road in Tsim Sha Tsui, an urban area in southern Kowloon that boasts Hong Kong’s glittering harbor filled with an interesting mix of stalls, shops, markets and malls. Nathan Road has long known as the heart of Tsim Sha Tsui. Once known as “Golden Mile” in the 1960s, the road has transformed from a sleepy street into gaudy, neon-lit boulevard lined with shopping venues, from cut-price cosmetics and jewelry stores to electronics and fashion outlets. 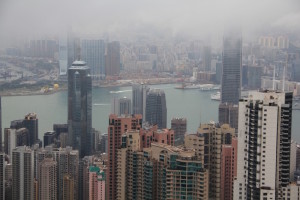 Also known as Victoria Peak, or Shan Teng in Cantonese, this is Hong Kong’s most notable natural landmark. Located in the western half of Hong Kong Island, The Peak boasts a major tourist attraction with views overlooking Central, Victoria Harbor, Lamma Island and other surrounding islands. I rode the Peak Tram to reach to the Peak Tower, which features a large viewing platform. Adjacent to it is The Peak Galleria with an observation deck. There are shopping and dining outlets, but what more interesting is the deck’s nice spot to view the city’s breathtaking panorama. 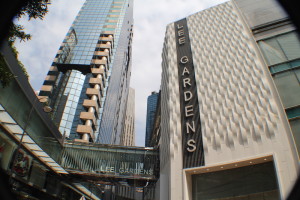 Known as Chung Wan in Cantonese, Central is Hong Kong’s business and financial hub.
It is the cliff-face of the city’s high-rise buildings that extent along the north shore of Hong Kong Island. The Central Ferry Pier, the terminal for the Star Ferry on the island, is where I began exploring Central. As I walked further, I reached two towers named International Finance Centre (IFC) and IFC 2 – both feature a combination of shopping outlets and offices. Heading to the East of Central took me to these two vibrant districts, both of which represent the flavor of modern Hong Kong.

Here, visitors are taken to indulge more in the local passion for eating, drinking and shopping. Bridging Central and Wan Chai is Admiralty. Once was the site of a British naval station, Admiralty now is home to Pacific Place, one of the city’s ritziest malls; and international brands of five-star hotels such as Marriott, the Conrad and Island Shangri-La.

And while you are in Causeway Bay, don’t miss visiting Times Square. With 14 floors of shops, restaurants and a cinema, it is the biggest mall in the area and one of the city’s icons. 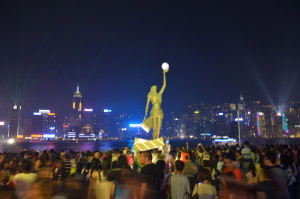 From the Star Ferry Pier, I went eastward along the harbor, which is also a waterfront promenade that provides a great vantage point for viewing the spectacular cityscape of the island’s north shore. Walking further down the promenade took me to the Avenue of Stars, which is also known as the Hollywood of Hong Kong. The place boasts tributes to the famous and less so of Hong Kong movie stars, including San Francisco-born Bruce Lee, Beijing native Jet Li and the first Asian 007 girl Michelle Yeoh.