In the world of business, start-ups and established companies must be highly familiar with innovation, one of the crucial components of growth and expansion. 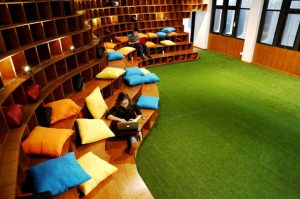 With Indonesia’s upcoming demographic bonus, the government has high hopes for its millennial generation, also called the Now Generation or Generation Y when it comes to start-ups. They are recognized for having creative ideas, being critical and finding solutions to problems arising around them.

Millennials currently account for about 60 percent of the country’s total population of 255 million, or some 90 million. They are expected to comprise 75 percent of the workforce by 2025, according to the National Planning Development Agency (Bappenas).

Experts have also said that millennials, well familiar with gadgets and social media platforms such as Twitter, Facebook and Instagram, have also demonstrated a preference for being entrepreneurs and the boss of their own business as they want to be self-reliant.

“They manage to cope with a problem and find solutions to a given challenge by coming up with incredible ideas,” said Steven Tjan, managing director of East Java’s chapter of Boga Group, which, along with UTS Insearch from the University of Technology Sydney, organized a workshop on entrepreneurship for senior high school (SMA) students in Jakarta, Medan in North Sumatra, Surabaya in East Java and Makassar in South Sulawesi late last year.

The workshop aimed to boost the spirit of entrepreneurship among the young millennials, unleash their potential and encourage them to be entrepreneurs.

UTS Insearch Indonesia development director Mariam Kartikatresni shared Steven’s view, saying: “This is in line with President Joko [‘Jokowi’] Widodo’s expectation to see Indonesia produce more [start-ups] that follow in the steps that the four [unicorns] have taken. Education and experiences are crucial for young adults in this regard,” she was quoted by kompas.comas saying.

Unicorns are start-up companies that are valued over US$1 billion.

According to a 2018 report released by the Digital Creative Industry Society, Indonesia is home to 992 technology-based start-ups, of which 552 are located in Greater Jakarta. 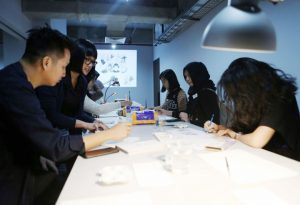 Low cost, high output: Participants carry out an activity at a workshop in the Jakarta Creative Hub in Tanah Abang, Central Jakarta. The Creative Hub serves as a workshop space, cooffice and coworking space that is available for rent at an affordable price. (JP/Seto Wardhana)

The emergence of technology-based start-ups, such as those engaged in e-commerce, online transportation services, online shops and other internet-based businesses categorized as micro, small and medium enterprises, have had a positive impact on local economic growth.

Low cost, high output: Participants carry out an activity at a workshop in the Jakarta Creative Hub in Tanah Abang, Central Jakarta. The Creative Hub serves as a workshop space, cooffice and coworking space that is available for rent at an affordable price. (JP/Seto Wardhana)

Many start-ups, or those that have just started their business, are benefitting from social media, especially when it comes to promotion or marketing.

Adelin Arlita Sari, who provides textile design services, for example, was surprised to receive an online order for hijab design work from a fashion label based in Malaysia and Brunei Darussalam.

“I promote my hijab designs on Facebook and Instagram,” said 21-year-old Adelin, a graduate of a private vocational school (SMK) in Jakarta.

She said creative ideas or innovations were needed to ensure her contemporary hijab designs were well-suited to the current trends among millennials. 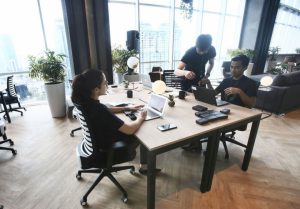 Creative environment: Millennials share ideas at Greenhouse Coworking Space in Multivision Tower, South Jakarta. The coworking space has been designed in such a way that it stimulates a creative work environment. (JP/Dhoni Setiawan)

“I try to continually innovate to keep my customers loyal, because the competition is increasingly tight,” said Adelin, who dreams of one day creating her own brand.

However, new businesses led by millennials are facing great challenges, especially when it comes to sustainability. In a discussion recently held by privately run television station Metro TV, PT Gambaran Brand CEO and founder Arto Subiantoro said: “It is easy for anyone to come up with creative ideas as long as they can find a solution to a problem. But the challenge is how to execute the ideas.”

“It will also take time to develop a brand. So, there’s still a long way to go before a start-up can turn into a mature or established brand.”

While most start-ups are struggling to innovate, build their brand and enhance their entrepreneurship skills for growth and sustainability, the growing number of small-and medium-sized enterprises (SMEs) in Indonesia, many of whom are engaged in fashion and food-and-beverage (F&B) businesses, provides a potential market for innovation products offered by mature companies.

“SMEs, including those engaged in textile production, are major buyers of our digital textile printers,” said Riswin Li, marketing division head of PT Epson Indonesia, a sale and marketing office and subsidiary of Seiko Epson Corporation in Indonesia.

Riswin Li underlined the vital role that the company’s research and development (R&D) plays in contributing to the sustainability of its business. R&D allows the company to innovate products catered to the Indonesian market.

He cited L-series printers that replaced cartridge-based ones as an example.

“L-series printers use an ink tank that can be refilled with affordable ink bottles. It offers an integrated ink tank design, a redesigned refilling process and faster speeds with high-quality print,” he said.

“Inkjet printers are more popular than laser printers because the former are electricity efficient,” Budi remarked, adding that “the ink-filling system has been redesigned to reduce the chance of spills”.

Meanwhile, the constant innovation and adoption of sustainability principles have prompted Nestlé Nespresso SA, a Switzerland-based operating unit of Nestle Group, established in 1986, to develop and expand its market overseas.

In partnership with Kanmo Group, it recently opened its first Nespresso boutique in Jakarta at Plaza Indonesia mall to introduce Nespresso machines to the Indonesia market, encouraged by the growing trend of making quality coffee at home.

“We started the pipeline for our 2019 projects many years ago,” he said. “Sustainability is our DNA and so we continue to think about how the technology and our innovation will develop along those lines.”

Support from relevant parties is needed to develop innovation-driven start-ups in Indonesia, with successful, mature brands certainly serving as role models for growth.