This form of three-wheeled public transport is vanishing from the streets of Jakarta. 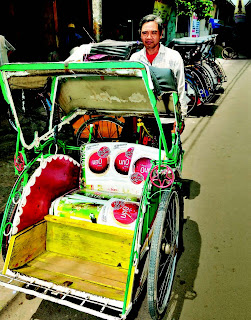 Fifty-seven-year-old becak (rickshaw) rider Dulatif regularly sits inside his vehicle from dawn to dusk on the corner of Larangan Street, in Ciledug, Tangerang, on the outskirts of western Jakarta.

Dulatif is one of only a handful of becak riders who still exist on the streets of Jakarta’s outskirts.

He has been plying his trade in a few different spots in the Jakarta area for 25 years. His heyday as a becak rider was between 1980 and 1990. He had four becak that he bought for around IDR200,000 (S$28) each. “In 1995, I was forced to move outside the city as there were many becak eradication operations. Since then, I have been operating my becak he re i n Tangerang.”

Becak are no longer allowed to operate in central Jakarta, but their presence can occasionally be found in the city’s outlying areas such as Tangerang and Bekasi.

The rarity of this cycle rickshaw as public transport has also led to an increase in its price. “You can buy becak for IDR1.5 million (S$210) each, but it has to be ordered first. The buyers are usually collectors,” he explains.