This advertorial is originally published in The Jakarta Post on May 8, 2017.

An important factor in the success of PT Riau Andalan Pulp and Paper (PT RAPP), the operational unit of the APRIL Group (Asia Pacific Resources International Holdings Ltd.), one of Indonesia’s largest pulp and paper manufacturer, is the company’s community development program. The program provides support to local entrepreneurs to enable the growth of their businesses in partnership with the company.

Zamhur is one example of a local entrepreneur who has benefited from this kind of partnership. His company, PT Mitra Pallet Consortium Jaya, specializes in manufacturing wooden pallets that are purchased by PT RAPP. 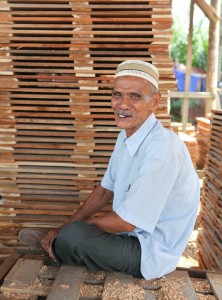 Once a civil servant, the 72-year-old Zamhur established the company in 2001 following his retirement. Through PT RAPP’s community development program, Zamhur was able to obtain a bank loan to start his company as well as advice on how to manage his new business.

“With this support, I can afford to get all the production tools I need. And I don’t have to find the market. All the wooden pallets we produce are specially ordered by PT RAPP,” said Zamhur. “Most of the pallets come from acacia and some from sengon wood supply.”

The profit generated from producing wooden pallets has earned him a good living, enabling him to undertake a haj pilgrimage and finance his children all the way through higher education level.

“Alhamdulillah, I have visited the holy land several times, and my eldest son has graduated from college,” said the father-of-nine.

Sulaiman is another success story. From his workshop in Pangkalan Kerinci, he manages the production of cocopeat, to be used as seedlings for acacia and eucalyptus trees. 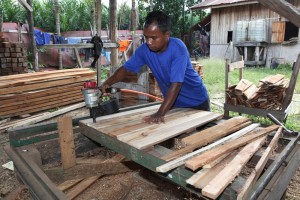 “I joined PT RAPP’s community development program in 2013. My first order was 30 tons of cocopeat within the first month of my company’s operation. Now I can supply as many as 600 tons to PT RAPP,” said the 38-year old who says the company returns a strong monthly profit.

Local entrepreneur Husni Thamrin offers another inspiring story. He started out driving a truck owned by his father, which provided a waste transportation service. Today, his business has grown with assets totalling around Rp100 billion (USD7.5 million).

Husni joined PT RAPP’s community development program in 2001 and established his first company, PT Taro Putra Pesisir. “I didn’t have any business background. My first venture was driving my father’s truck to transport garbage from one point to another. As I gradually became more business savvy, I realized there was an opportunity to scale up. I am thankful for PT RAPP’s program that has nurtured many local entrepreneurs, including myself.”

Sulaiman and his staff in his coco peat production field. (JP/Arief Suhardiman)

In 2004, Husni changed the name of his company to PT Nilo Engineering. The word Nilo is taken from his birthplace, also in Riau. With a high level of confidence, honesty and persistence, Husni is developing a new venture in heavy equipment rental. His wife, Rohani also helps him runs the company.

“PT Nilo has grown along with PT RAPP’s high demand for heavy equipment rental units,” the 37-year-old said. Currently, PT Nilo’s assets are valued at around Rp 100 billion, which includes the company’s 30 heavy equipment units and 25 trucks, all of which are rented to PT RAPP.

“It wasn’t easy to shift gear from being an illegal logger to running a transportation company, but PT RAPP’s program has taught me a lot about being an entrepreneur,” the father of three said.

His company, PT Idlal Bersaudara regularly transports fertilizers to PT RAPP, using a diesel truck that can accommodate 12 tons of fertilizer for each journey. 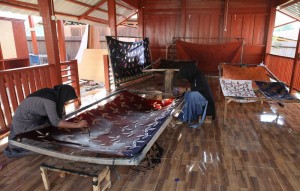 In 2014, Tengku received an award from PT RAPP for implementing workplace safety and health principles and was recognized as a contractor that exercises the best practice of legal compliance.

PT RAPP’s community development program also reaches out to housewives in Pangkalan Kerinci. In a production house called Rumah Batik Andalan (RBA), as many as 10 women are actively taking a role in the making of Bono batik.

“Here, batik is not as popular as on Java Island, especially when compared to Pekalongan and Solo. But we have realized our potential of creating batik patterns that represent Riau,” said Hari Fitri Ramdhani, RBA’s coordinator and one of the batik makers.

“The Bono batik is one of the most popular here. Its pattern is derived from a rare tidal surge in the mouth of the Kampar River. Other patterns include eucalyptus leaves and acacia leaves.”

Through the Andalan Cooperative, Fitri said that local women were empowered to become batik makers to earn extra income. “To hone our skills, we were sent to Pekalongan for batik training.”

Most batik producers are still concentrated on Java Island. Yet, Fitri says that with more practice and support from PT RAPP’s community development program, she and other batik makers in Pangkalan Kerinci are aiming to take Riau’s batik to the next level.

Pangkalan Kerinci is the local capital and the hub of economic activities in Pelalawan. It is the newest regency in Riau, coming into existence following the enlargement of the Kampar regency in 1999.

Pangkalan Kerinci was a small village when PT RAPP commenced its operations in 1993, with the growth of the company supporting the development of the surrounding area’s infrastructure since then. Currently, around 30 percent of PT RAPP’s pulp and paper production supports the Indonesian market, while the other 70 percent is exported markets including Singapore, Australia, South Korea, Japan and the US.