By: Sudibyo Wiradji. Originally published in The Jakarta Post on August 17, 2021

Sumatra is home to a large proportion of the peatlands of Indonesia and that is why fortified efforts to protect the peatland ecosystem on the island are indispensable as the forest fire-triggering dry season has arrived. Out of the total 14.9 million hectares of peatland in Indonesia, about 6.4 million ha, 43.2 percent, are found on Sumatra. However, some of these peatlands have been drained, which leads to land and forest fires. This situation, according to IPB University professor Bambang Hero Saharjo is very precarious. 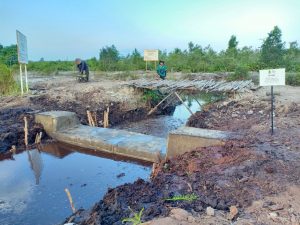 The impact of peatland fires on Indonesia can lead to the country coming under the international spotlight given that peatland fires do not only affect the environment and health but also increase global carbon emissions. In essence, sustainable peatland protection and management need to be urgently intensified.

“It is much better to safeguard the peatlands considering that when they are damaged, they take a long time to recover,” he said.

For that reason, Bambang suggests that an early-warning system for fires should be in place and the law must be tightly enforced.

He also said that quick work on the ground must go along with the infrastructure and systems that have been developed. “Entering the dry season, assigned officers should ensure that equipment is prepared properly and can work well. The team has to be ready to work,” he said.

Head of the working group for peatland restoration in the Sumatra region, Soesilo Indrarto, said that during the dry season the Mangrove and Peatland Restoration Agency (BRGM) along with a team on the ground continually ensured that peat-wetting infrastructure (IPG) in the form of canal blocking and deep wells in the restoration-targeted provinces of Riau, Jambi and South Sumatra continued to function. Monitoring also involves a community group that the BRGM has established.

According to Soesilo, it is crucial to ensure that the IPG functions properly and in this way the operation of rewetting drought-vulnerable peatland (OPGRK) and the quick response operation to rewet peatland (OPCLGT) can function well.

The operation of rewetting peatlands started in 2021, with Riau as the first targeted location.

“The local community has been prepared as the first responder and key stakeholders in an emergency situation,” he said.

Head of the working group for restoration techniques, Agus Yani, said that the community group had received aid in the form of technical assistance and equipment. “We conducted training sessions and we have also given equipment, including water pumps to rewet peatland to keep it wet in the dry season,” Agus said.

According to Agus, blocked canals are not only a source of water to rewet the peatland but also help boost local community productivity. “They can use it as a transportation route and a facility to carry commodities, such as coconuts,” he said.

The utilization of the separating canals for community activities can reduce the risk of fires as it provides benefits, local people certainly safeguard the peat, he said.

Efforts to rewet the peatlands are part of the BRGM’s contribution to anticipating the occurrence of forest and land fires, carried out in collaboration with Environment and Forestry Ministry, National Disaster Mitigation Agency (BNPB), provincial/regency administrations and the Indonesian Military (TNI) and National Police.

Riau Forestry Agency head M. Murad acknowledged that he encountered some predicaments when working on the ground.

But various efforts have been made to tackle fires, for example, by involving security officers in the fire-prone areas.

“Riau province is close to North Sumatra. Immigrants coming to Rokan Hulu put pressure on [the province], which poses a challenge,” said Murad.

Murad said that recurrent attempts to set forests on fire are made by justifying a perspective that setting forest fires is a traditional activity. “We have to be alert and [monitoring] must be tightened up. Opening a new plantation can no longer be tolerated,” he said.

Meanwhile, local community groups and students are involved in safeguarding the blocked canals.

In Jambi, the peatland conditions are also subject to regular monitoring.

Thanks to the application, follow-up steps could be taken to tackle the land fires that occurred several days ago, he said.

“Only in a matter of one hour, the team monitored in the afternoon and in the evening the fire fighters moved and we, through the community group, extinguished the fires by using water sourced from a deep well,” Ahmad said.

Ahmad also related the success story of the economic-revitalization program implemented by the BRGM in Catur Rahayu village, Jabung Timur regency, with local residents engaged in livestock farming and using the funds to finance the patrols of the peatland.

“Alhamdulillah [Thank God]. This is really an incredible initiative,” he said.