By Sondang Grace Sirait. Published in The Jakarta Post.

Business executive Mantosh Malhotra leads with encouragement to make a difference in the world of IT. 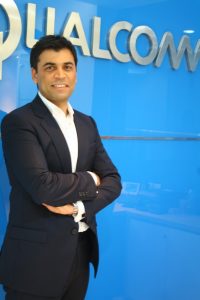 Mantosh Malhotra has the quintessential portfolio of a telecom executive. Educated in electronics and telecommunications engineering, with an MBA from a prestigious business school, he has had a stellar career in the industry he passionately embraces.

‘I’ve always been in this telecom industry. This is all I know, I guess,’ he said, playing it down. ‘I’m a gadget guy, a gadget freak. Every time I get a new phone, I don’t talk to my family for at least six to seven hours straight, trying to set up that phone and trying to make it work.

‘That’s what excites me. From the industry perspective, I think I personally feel I’m in the right industry where, let’s be honest, it’s a glamorous industry as well. I could be selling paper somewhere and nobody would know about me. From the Qualcomm perspective, we’re doing cutting-edge innovation that keeps me excited as well.’

Zeal, along with teamwork, is an important element for Mantosh, whose responsibility as Southeast Asia Regional head of Qualcomm Inc., a San Diego-based global 3G, 4G and next-generation wireless technologies company, is to drive business operations in Southeast Asia.

‘I put a lot of focus on teamwork. I don’t think any one individual is smarter than the group and there have been a lot of experiments done as well, so it has been scientifically proven. Generally speaking, more heads put together thinking about a problem generally come out with better solutions than any one individual. So that’s definitely one of my key objectives to ensure that all the team members are aware of it and good team players too,’ said the father of two.

‘The example that I always use is you take a piece of paper and you have a paper basket there. If you put the basket too close, it’s too easy for you to put the paper in. It’s not a challenge. You put it too far away, you try it once, twice, it’s too difficult and you give up.

‘The challenge is where is the right point for you to put the basket so that the person is still motivated to put the paper in the basket. You have to find that level in each individual, and they’re all different. Some are a lot more driven and excited about their day-to-day jobs, and some are less. For each individual, you have to find the right amount of challenge that you can throw at them, so that they try and do more,’ he said.

Another initiative he oversaw promoted efforts to bring Internet connectivity to poor communities in the region.

Subsequent projects saw the technology company contributing in the areas of education, entrepreneurship and healthcare in the region, from digitizing medical records at government hospitals in the Philippines to adapting school curriculum onto mobile phones in Singapore ‘ a social innovation wrapped in advanced technology.

‘I would like to think that the work Qualcomm does and what I personally and my team contribute to is making some difference, be it at a smaller level, in Indonesia or in the Philippines, all these things put together keep me going and keep me excited,’ said Mantosh.

For the engineer in him, there’s no better job than his current one, and no other industry but telecommunications.

‘There’s always something new. When I started it was the SMS and voice days and then data came on the phone. At that time I was actually doing some hands-on engineering work.

‘This was some 12 to 13 years ago when I was in Australia. I remember making the first GPRS call. It took me six hours to make the connection. Now we expect to turn on our phone and the data has to be there. It took six hours to create that connection inside a lab, not even in a real environment.’

As options abound in this era of connected technology, customers these days rightfully get more and more demanding. Gone are the days where producers took sole control of product design. Telecom customers today are generally better informed and rightfully selective.

Wearing his consumer hat, this is also a fact Mantosh can relate to when shopping for a smartphone.

‘I think my engineering days are over and I don’t want to sit there and design the phone, but I am looking for something that makes my life easy and adds value to my day-to-day activities, and makes me more productive.

‘When I say productivity, it doesn’t mean work-wise only. It could be something to do with my health, if I’m a fitness freak and I want data to be collected and it should be fed back to my doctors, charts and all that. Rather than me sitting there manually, if it can all be automated through a gadget, it will be amazing,’ said the golf lover.

Always enlivened about his work, Mantosh is a constant source of inspiration to everyone around him. Just like the industry is always growing and evolving, that’s how those in it also should be: consistent, resilient and ever ready for a challenge.