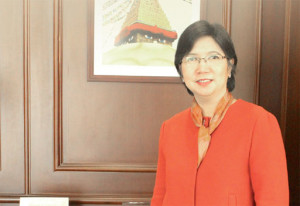 The newly appointed commissioner at Indonesian Deposit Insurance (LPS), Destry Damayanti, peers down the surrounding cityscape from her office in Sudirman Central Business District. “We’re currently experiencing economic fluctuation, but the country continues to achieve economic growth. I’m optimistic this will improve the position of our nation on the global scale in the future.”

To contribute to the government’s moves to improve the economy, in 2014, Destry, along with two other experts, founded the Mandiri Institute as an independent think tank engaged in research and pilot projects.

With her economic savvy, she took on the leadership role in the institute, helping the government to shape those of its policies that can be implemented. The focus of the institute is the inclusive growth of the country, which includes issues such as public financial access, food prices and forth.

Her significant contribution to the Mandiri institute has led to her recent promotion, seeing her take on the lead role at LPS.

In her position as a member of the LPS board of commissioners, to manage the institute, Destry works hand-in-hand with the other five members of the board.

As board leaders, all the commissioners at LPS play a role, she explains. “So, it is the duty of every member of the board to take responsibility for the running of LPS”.