With a wealth of leadership experience under his belt, Stewart Whitney is mapping a business model to build a strong brand presence.

Business leaders should be able to show their subordinates a map that helps them see why they should choose a particular route, according to Stewart Whitney. 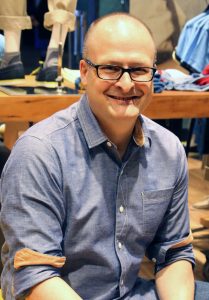 During his six-year stint managing outdoor lifestyle brand Timberland in the Asia-Pacific market, Whitney was able to use his leadership map to build a stronger team that has successfully doubled the business with approximately 20 percent annual growth across the region.

For him, relocating from the Hong-Kong based Asia-Pacific office to the brand’s headquarters in New Hampshire was like returning home, with more work responsibilities awaiting.

‘I’m focusing my first 100 days as the brand president on working with my new team toward gaining understanding for the business, brand and organization at a global level,’ he said.

In his current position as the brand president, strengthening Timberland’s presence is his ultimate goal. To achieve this, Whitney emphasizes the importance of creating the right map to lead a team.

‘Simply put, as I’ve read somewhere, the one must-do role of a leader is really to define reality to the troops. This is important bedrock of setting up the vision of where we are going. In my case, I frame reality for my team by defining its situation, which often derives from the differences within an organization, from cultural background, gender, to education,’ said Whitney.

‘This is the reality you should be aware of. Next task is how to balance the differences. Once achieved, then you can set up a business vision.’

To him, a business vision is a map to give direction in a way no satellite navigation system could. It is a vision where everyone takes action against differences to reach a common goal, he added.

‘We also put consumers at the center of our business. We try to serve consumers better than anybody else. Our marketing campaign and communication is one way to achieve this. To maintain and enhance the quality of human resources, we regularly conduct training programs for our employees,’ he explained. 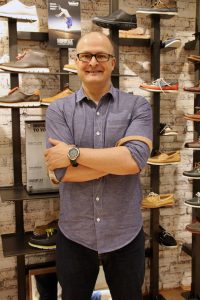 The history of Timberland stretches back to the 1950s when founding father Nathan Swartz established the Abington Shoe Company in Massachusetts. His son, Sidney, created its first yellow boot in 1973, followed by the change in the company’s name to Timberland. Under his leadership, the company later evolved into a lifestyle brand, with more product variants.

Headquartered in New Hampshire, the firm now manufactures various models of footwear. Yet, the iconic yellow boot is still popular. Its popularity, as Whitney explained, is due to the company’s ability to maintain its strong brand presence, ‘which also leads to the company’s branching out into other products, such as collections of men and women’s clothing’.

Whitney, 46, joined the company in 2000 as part of the global marketing team of the Timberland PRO business, a brand of premium boots designed for professional tradesmen. In 2006, he was appointed vice president and general manager of Timberland PRO business, during which he was tasked with increasing the brand’s status in the North American industrial and commercial markets.

With Metroxgroup as the local partner, Timberland currently has 13 locations across Indonesia since the opening of its first store in Senayan City in September 2012. Set to open soon this year are stores in Central Point Medan, Grand Indonesia in Jakarta and DFS Galleria in Bali.

As the business continues reaping profits, so does the brand. ‘We are on track with our business according to what we have mapped out. The business outlook here in Indonesia is truly promising,’ Whitney said during a short visit to Bali for the launch of a Timberland store at Beachwalk Mall.

In his new role, Whitney is expecting more major boosts with stronger brand presence not only in Indonesia and Asia Pacific, but all corners of the world. It is not an easy task, indeed, but it is feasible as he expresses his confidence business-wise.

‘I’m mapping my business model now to build the brand’s stronger presence worldwide by being a good listener, having more of the questions and the answers, and encouraging people to take risks in a thoughtful way. That’s how I characterize my management style!’ he said.