Quick and painless wave therapy to break up kidney stones. 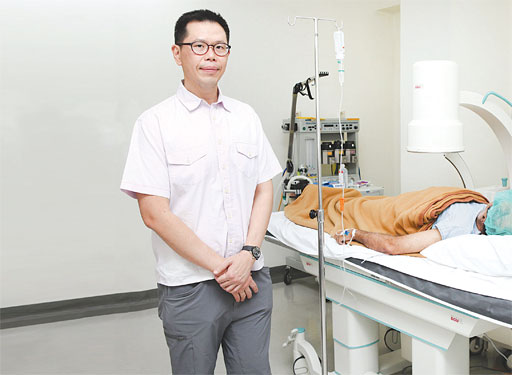 Advanced medical technology has paved the way for more efficient treatments, which require smaller incisions, shorter hospital stays, less pain and quicker recoveries. By the same token, people with kidney stones can take advantage of lithotripsy, a medical procedure to treat stones in kidney and other organs such as gallbladder and liver.

“This non-surgical procedure uses shock waves to break up stones. After the treatment, the stone debris will travel through the urinary tract before passing from the body,” explained Dr. Marto Sugiono, Sp. U, a urology specialist at Kebon Jeruk Siloam Hospital.  The most common form of lithotripsy is extracorporeal shock wave lithotripsy (ESWL), he further explained. “This non-invasive procedure is safer and easier compared to other procedures especially the invasive ones.”

J+ recently sat down with the doctor to talk more on ESWL, which has become the preferred tool in the urologist’s armamentarium for treating kidney stones.

The following are excerpts of our interview:

How effective is ESWL procedure for kidney stones?

ESWL is effective for kidney stones, which are sized between 4 mm and 2 cm in diameter. These types of stones may cause pain and block urine. As the name suggests, this type of lithotripsy uses high frequency sound waves, also called high-energy shock waves, to break up large kidney stones into smaller pieces. Extracorporeal means “situated outside the body”, which in this case refers to the shock waves. An ESWL session requires the use of X-rays to target the location of the stone, and a device called lithotripter to generate the shock waves. The waves travel into the body to pulverize the kidney stones.

There are, however, several brands of lithotripter, each measuring different level of quality. We use the one manufactured by the Germany-based Richard Wolf GmbH. What special about the brand is that the lithotripter is equipped with piezoelectric shock wave technology. In fact, the Wolf is the world’s only provider of ESWL device with such a cutting-edge technology.

In essence, the technology boasts the least painful way of breaking the stones into tiny particles. There are other devices that are also powerful, but in many cases the use of these devices requires anesthesia to reduce the pain and discomfort during an ESWL session. This means increasing the cost and possible complication rate, and patients may not be able to go home on the same day.

With the Wolf piezoelectric lithotripter, patients generally do not feel the pain. Even if they do the pain is usually tolerable. All in all, it’s an anesthesia-free device that allows quick recovery time

How long is the treatment?

It takes only around an hour for an ESWL session. In some cases, the stone cannot be fragmented with only one treatment. A number of sessions may be required depending on the size of the stone. For instance, a patient with 2 cm stone may need to undergo 3 treatments. If he or she only has 6 mm stone, perhaps one treatment will do.

Are there types of kidney stones that cannot be removed with ESWL treatment?

ESWL does not work for very large stones, especially those larger than 3 cm, and ones that have blocked the urinary tract. The blockage can cause the kidney to swell, and the stone cannot be fragmented using ESWL procedure. This is the case where a small incision or perhaps a major kidney surgery can be considered as an option.

Pregnant women and patients with blood clotting problems also should definitely not undergo ESWL. However, ESWL is safe for children and has become the treatment of choice for most pediatric urinary stones.

Indonesia is in the stone-forming belt. The country’s geographic location that straddles the equator is counted as one of the world’s highest kidney stone incidence areas.

“The effect of geography on the incidence is pretty obvious. The country’s tropical climate with relatively high humidity increases the rate of perspiration, which in turn promotes increased urinary crystallization, thus contributing to the risk of kidney stones” Marto said.

“Kidney stones are formed when certain chemicals in the blood crystallize. This crystallization forms solid stones that are lodged in the kidney.”

The kidney stone pain can be unbearable and some of the stones can stay lodged in the kidney for years. In search of the remedy, ESWL is dubbed the most sought-after non-surgical procedure for the treatment of kidney stones. “ESWL’s least pain and quick recovery are the factors that determine its popularity, yet the treatment does not replace the need for preventive measures,” Marto said.

Preventing kidney stones is not that difficult, but it takes determination to succeed. “You need to drink enough water; have a healthy and balanced diet such as vegetables and fruits; avoid eating too much salty food and red meat, like mutton, lamb, beef or pork; instead, eat more white meat such as chicken or fish; consume less peanuts; and be careful with high-cholesterol seafood, like crab and prawn!” the urology specialist concluded.