The culinary family at Conrad Bali is warming up as globe-trotting gastronaut David Laval settles in as the resort’s new Director of Food & Beverage and Culinary Operations. 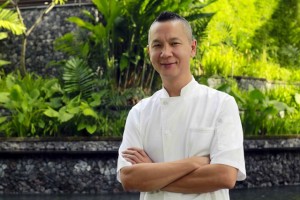 Laval has hit the beach running with a warm and inspired remix of the menu at Conrad’s Bali flagship confidently relaxed beachfront fine dining restaurant, Eight Degrees South. He introduces a new a la carte concept called ‘Small Tastings’; a light tropical take on tapas designed to be shared, with an emphasis on locally sourced and sustainable produce, meats and seafood and an infusion of Balinese flavors combined with perfect technical execution.

“The ocean here is healthy and abundant. We are sourcing more seafood and our fishermen visit us on a daily basis with their catch of the day. We will work to produce high quality, fresh and simple food,” Laval said.

Laval’s warm, sunny and confidently relaxed revolution has also left SUKU suffused with a golden glow. “Bali is full of richness in culture and flavors. It is something I want to focus on more, bringing the destination even more into the restaurants, local herbs, spices and flavors that reflect the authenticity of the cuisine and the destination and offer the guest a cuisine that complements their journey, SUKU is a more classical – with simple presentation and great flavors,” he said.

Laval, who has honed his art in kitchens from Sydney to London and Hong Kong to Japan, was most recently in charge of the food and beverage offerings of Conrad Maldives, before joining the pre-opening team for the first Conrad hotel on China’s doorstep.

Laval’s long standing passion for cooking saw him move to Australia at the age of 16 to complete a five year apprenticeship through Sheraton Mirage Gold-Coast, Ana Hotel and the Conrad Jupiters Casino. He has since dedicated his career to expanding his culinary knowledgearound the world to increase his understanding of fine cuisine and he continued to work in various destinations such as the ‘Relais & Châteaux’ Le Lemuria of Praslin in Seychelles, in New Caledonia, in Bermuda at the Fairmont Southampton as well as the Mayfair in London. Since 2001 he has been a member of L’Acadèmie Culinaire de France and the prestigious Association ‘Les Disciples d’Auguste Escoffier’. He is also a member of the Association Culinaire Française in London, known as the ‘Society of Master Chefs’.