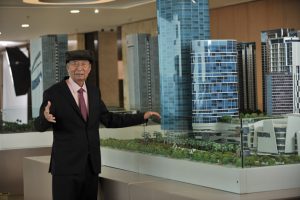 The figure of Dr. (HC) Ir. Ciputra has inked in the history of property development in Indonesia. With over 50 years of property expertise under his belt, he has successfully built milestones with uncountable numbers of property products from Sumatra all the way to Papua as well as in other countries like Vietnam, China, Cambodia and India. His venture in the world of property started in 1961 upon earning his bachelor’s degree in architectural engineering from Bandung Institute of Technology (ITB). In that particular year, he founded PT Pembangunan Jaya (formerly named Jaya Group), known as the developer of Taman Impian Jaya Ancol. Later in 1971, he established PT Metropolitan Development, and in 1981 Ciputra Group as a family business (later the company changed its name to PT Ciputra Development Tbk). Currently sitting as the president commissioner of the company, the property veteran shares with Indonesia Design his views on the synergy between arts and design, as well as his vision of entrepreneurship as the spirit that needs to be instilled in the next generation.

With your background as an architect, how do you synergise art and design elements in developing a project?

I always see art as a vital part in the making of creative design. It takes a dialogue between art and design in order to create a harmonious synergy between the two elements. Many of our projects feature the spaces that appeal to the collaboration of artists and designers. We have carefully selected esteemed artworks by acclaimed artists to enhance the aesthetic elements of interior design.

You are also an art collector and a big fan of the late Hendra Gunawan. How did you first develop your passion for art?

Well, I was surrounded by many artists while I studied architecture at ITB, and started to collect art pieces after completing my academic degree. The first artwork I bought was a painting by the modern artist Hendra Gunawan. I really admire his works. He got his art flowing in his blood, and he painted from the heart.

How well did you know him?

I often had letter correspondences with him. I remember visiting his home in Bali back in1983. He told me that he used his paintings as a collateral to get the loan to build his house. I wanted to help him marketing his art pieces, but he passed away not long after my visit, also in that year. Surely, Indonesia had lost one of its great artists. But I always see his masterpieces come to life before my eyes. So do other art enthusiasts I believe. That’s why some of our projects are uniquely designed with a gallery concept that presents Hendra’s artworks. The Gallery Restaurant at Ciputra Hotel and the gallery at Ciputra Artpreneur are some of our properties that display his artworks.

How do you view Indonesia’s art scene?

Today’s generation seems to value arts better than that in the past. With more galleries open to the public, I see more and more those of young generation are interested in art, and there have been a growing number of local contemporary artists contributing to the art development in the archipelago. In the past, I saw many talented artists but they didn’t know where to market their works. So, I built the Art Market (Pasar Seni) in Ancol as an infrastructure for the artists to work and sell their pieces.

You are also known as a philanthropist and have established various social foundations. What drove you into it?

It’s what I call social entrepreneurship; you’re building a business while helping a community. This what led me to establish Indonesian Real Estate Association (REI) and co-found Asia Pacific Real Estate Foundation (APREF). I was also once the president of International Real Estate Federation (FIABCI). Being active in an organisation is not about achieving an individual goal, but more into contributing to others. I always encourage today’s generation to engage in entrepreneurship. Being an entrepreneur, you can help create more jobs; thus reducing the unemployment, which is one of the social issues that need to be addressed in our country. 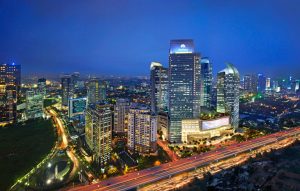 Let’s talk about property. How optimistic are you with the future of Indonesia’s property?

Property industry is one of the most dynamic industries in Indonesia and I have had tremendous privilege to take part in its development for over five decades. The needs of comfortable places for living and working evolve with the time. I have seen such times, particularly when this industry flourished. Yet, sadly, I witnessed the downfall of the industry in the late 1990s. The economic crisis that hit Asia in 1998 and the global crisis that swept the world market in 2008 also showed how fragile humans are, and how important it is to maintain sustainability in the financial sector and in the spirit of entrepreneurship. Shelter, along with food and clothing, has always been the basic necessity. So, the property market always exists. We have a big work in our hands. With stronger entrepreneurship, the next generation should be more innovative to improve the condition of the industry towards achieving a better future.