By Prasiddha Gustanto. Originally published in The Jakarta Post on August 1, 2018. Ever since it was officially formed in November 2010, the Swiss Alumni Association (IAS) has been an organization dedicated to giving Indonesians who have lived in Switzerland a means to network with each other. “We are trying to become a ‘home’ for any Indonesians who have ever stayed in Switzerland and are already back in Indonesia, and also to become a reliable partner for other Swiss communities [cultural, … END_OF_DOCUMENT_TOKEN_TO_BE_REPLACED 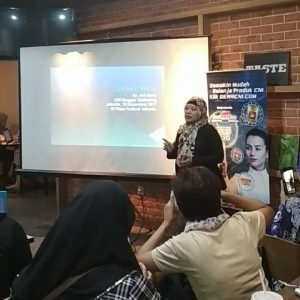 By Ruth Ninajanty. Originally published in The Jakarta Post's Education Tabloid, October 2017. After spending most of her day at school, fifth grader Yosefin is definitely tired when she arrives home. She leaves home at 6:30 a.m. and returns at 5 p.m. This year, her mother Hidiawati decided against enrolling her in any extracurricular activities so she can return home earlier and have more time to study. “I always try to be flexible when it comes to study time at home. I leave it up to … END_OF_DOCUMENT_TOKEN_TO_BE_REPLACED Words: Gandi Faisal Originally published in The Jakarta Post Language proficiency is seen as what makes or breaks Indonesian lecturers in the global education and research industry. Even though Indonesia has made achievements in terms of English writing skills in Southeast Asia, the country still faces problems when it comes to producing scientific papers of international standard. So far, 5,421 scientific papers from Indonesia have been published in international journals in … END_OF_DOCUMENT_TOKEN_TO_BE_REPLACED Words: Ruth Ninajanty Originally published in The Jakarta Post on March 31, 2016 I am asked a lot about how my son became bilingual. He is 10 years old and currently speaks English and Indonesian. At school he also learns Mandarin. I’ve heard so much about the benefits of raising a bilingual child, from better problem-solving abilities due to their active cognitive process as they switch languages, to a brighter future as they are able to communicate globally. But for me, the r … END_OF_DOCUMENT_TOKEN_TO_BE_REPLACED By Ruth Ninajanty. Published in The Jakarta Post. Childhood educator Neeltje Sutandjati puts emphasis on teacher development to improve her schools. Early childhood education is more than just teaching young children about words and numbers but also introducing them to every aspect of life. When School Director Neeltje Sutandjati started iSmile in 2007, she wanted the school to make a difference for society and the nation. 'Setting up a school should be founded foremost on a passion … END_OF_DOCUMENT_TOKEN_TO_BE_REPLACED The cost of education continues to increase, but schooling is still the best option in terms of securing a bright future for any child. With competition getting stiffer in the job market, university degrees will become the must-have tool to achieve career success. But going to a university is not cheap, not to mention the incremental cost of tuition fees that can reach 100 percent within three to four years. The average inflation rate in education costs is estimated at around 15 percent … END_OF_DOCUMENT_TOKEN_TO_BE_REPLACED BOOK REVIEW Develop and Nurture Your Newborn’s Full Potential By Glenn Doman and Janet Doman The book takes parents to gradually progress toward achieving their babies’ full potential. The authors provide the necessary information that guides parents on how to develop the newborn with physical, verbal and cognitive stimulation from first days after birth. Every chapter comprises step-by-step guidance on creating a home environment potential to enhance your baby’s brain development. Th … END_OF_DOCUMENT_TOKEN_TO_BE_REPLACED