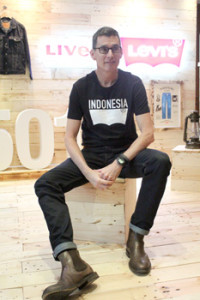 Levi’s brand whiz Chip Bergh is bringing the blue jeans pioneer back to its glory with sustainability, innovation and social media approaches.

How to take proper care of a pair of denims has been a subject of debate for decades; some say hand washing is the best method while many others throw their jeans in the washing machine.

Regardless of the choice of the method, Charles “Chip” Bergh challenges the mindset of having to wash jeans after a few times wearing them.

“Don’t wash your jeans very often. I wash mine twice or three times a year,” he declares.

While some might get freaked out with his provocative statement, denim aficionados believe in never washing jeans. “The less often you wash your jeans, the longer they last. At the same, you also conserve water. It’s slow fashion with sustainable practice,” says the president and CEO of Levi Strauss & Co.

Coining the phrase “slow fashion”, Bergh, 57, translates sustainability as the quality and durability of a product.

“We are not those fast fashion brands that you dispose of the clothes after wearing them a few of times. Our denims, if you treat them right, will last for a long time, probably longer than people’s life span,” he says with a chuckle.

Levi Strauss founded his eponymous company in 1853 and patented the blue jeans with the launch of Levi’s 501model in 1873.

The company is celebrating its 142nd birthday of the 501 jeans. Our products are truly built to last. We even have 136-year-old pair of jeans in our archive,” says the New Yorker at his recent visit to Jakarta.

Currently, the company carries four brands – Levi’s, Dockers, Signature and Denizen. Of these four brands, Levi’s captures higher market share compared to the other three altogether. The jeans can now be found in over 2,800 stores in 110 countries.

“Much water is consumed to get the jeans washed. So we have created ‘A Care Tag for Our Planet’ designed to promote donating to goodwill. This initiative is what also encourages consumers to take a good care of their Levi’s jeans by washing them less often,” he says. 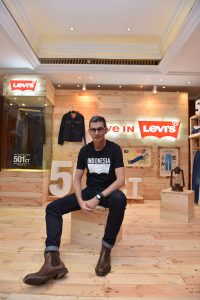 Bergh joined Levi Strauss in September 2011 after 28 years with Procter & Gamble (P&G). The former head of P&G was a key architect in helping the company make Gillette Fusion a big brand for razor blade products. Now he is working the same magic at the helm of Levi Strauss.

Levi’s was for a very long period resting on its laurels. In 1996 the company reached its peak year, amassing a fortune with US$7.1 billion global sales, bigger than $6.5 billion of what Nike achieved in that year.

The next five years, the figure plummeted to $4.2 billion and the company lost its relevance and stopped innovating. It was massive shareholder destruction and Levi’s almost went bankrupt in the early 2000s.

“I joined Levi Strauss when the company was in its 15th year of very poor performance. The company really lost its mojo. Back then, when I was with P&G, we used to study about Nike and benchmark against Levi’s. We wanted to have the global presence like Levi’s. That’s the kind of Levi’s was in the 1970s-90s. And it’s my goal to bring the brand back to its glory,” Bergh, 52, says expressing his optimism.

Under his leadership, the company has gone through major restructuring. “A big part of the job was building the right executive team and getting our cost structure right. The company cut out its fat and cashed it in things that could grow the business. We built an innovation center two blocks away from our office. Now, 80 percent of our product lines come from that innovation center. This is where we get designers and merchants a sandbox to play and create. It’s a creative industry and we never had before.”

Headquartered in San Francisco, Levis Strauss has for two consecutive years demonstrated its sustainable profitable growth. “It’s the first that we have done in a decade. We are looking forward to three years in a row, then four years in a row, and so on,” he says adding, “It’s time to generate a lot of cash that we can invest back in the biz and make the company great again.”

Asked about where Levi’s is now in denim competition, Bergh says, “The category is incredibly competitive, but also very fragmented. We compete with large global multinational companies and local players in big markets. Nevertheless, we will not engage in price war because we are never going to have low price products. We stand for value and quality. You may have to pay a premium price, but it will last long. That’s our category!”

There are a number of things that compete for the dollars. “What we need to do is be relevant with the young generation, by being connected with them,” Bergh remarks.

“We are very concerned with the digital space, to connect with our customers. Even my six-year-old daughter is able to send e-mails using my iPhone. Youngsters are on screens to connect with their friends nowadays. In the world of fashion, cyber space is how today’s generation also connects with their favorite brands now.”

In response to today’s fast paced technology, he adds that a big part of Levis Strauss’ marketing investment is in digital and social media.

“Where the puck is heading is social media turning into commerce. Being able to be on a social site and talk with friends about something and being able to purchase products to the Levi’s website is where we all are heading. That’s how we’re connecting with our consumers in Indonesia because you can target specific customers. Not only is it efficient but also it’s where consumers are spending time now. So you have to be there to be relevant.”