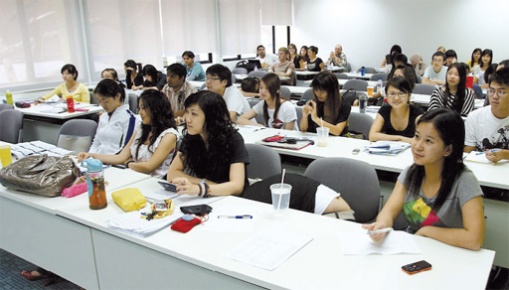 Language proficiency is seen as what makes or breaks Indonesian lecturers in the global education and research industry.

Even though Indonesia has made achievements in terms of English writing skills in Southeast Asia, the country still faces problems when it comes to producing scientific papers of international standard.

So far, 5,421 scientific papers from Indonesia have been published in international journals in 2015, according to directorate general of research and development reinforcement, Muhammad Dimyati.

This achievement ranks Indonesia fourth in Southeast Asia in terms of number of scientific papers published abroad, with the writing of those papers being dominated by educators and post-graduate students from higher education institutions.

Nevertheless, there is still one nagging problem that prevents more Indonesian academia from producing scientific papers of international standard.

The same problem also prevents some lecturers from optimizing their potential as educators.

English language: a foreign language in this country, and one of the world’s lingua franca. Knowledge of English will open the doors to many opportunities.

Yet, many Indonesian educators in higher education institutions still have problems using the language, especially in a scientific and academic context.

One way in which Indonesian lecturers could boost their language knowledge and competence is by making use of the ever increasing number of international scientific literature and live discussions available online.

With good language competence, they could become more autonomous learners and get in touch with colleagues from all over the world.

That way they can get exposed to the English language used in those forums, as well as get involved in discussion and receive input. She further said that through research and writing scientific articles, lecturers would improve the quality of lectures they deliver in their classroom.

‘University students need to develop their critical thinking, which means having a deep approach to learning. Lecturers should help them develop this skill,’ said Afnan S. ST. MM. who teaches English Language and Integrated Character Building at the University of Indonesia (UI).

‘There are many master’s degree holders and professors who have no problem giving lectures in English. Those people are usually accustomed to conducting research and participating in international seminars. But they still represent a small portion,’ he added.

Afnan S., who also teaches an international class for the double-degree program at UI, said that some educators holding postgraduate degrees still struggled with the necessary language for certain academic purposes.

‘They are good at using English language for communication. But, when it comes to applying their language skills in an academic or technical setting, they often face difficulty,’ he explained.

‘Multilanguage competence is very important for lecturers. They need it to be able to access the latest information on technical developments available in textbooks and scientific journals,’ he said.

Dikman Maheng is a scholarship awardee for a master’s degree at UNESCO-IHE in Delft, the Netherlands, and is now head of environmental engineering at Muhammadiyah in Kendari, Southeast Sulawesi.

He laments the level of English language competence of higher education teachers outside Java, which he said was not very high.

A breath of fresh air

‘In fact, the government, through the directorate of higher education has helped a lot. The directorate has been giving free language training to lecturers since 2011. And reading scientific journals also helps; sometimes, practice makes perfect.’ Dikman Maheng said.

Every year, the directorate launches a three- or four-month English training program for lecturers wanting to improve their English skills.

This usually coincides with participants’ plans to continue their study abroad or to join scientific programs overseas. Each institutions offers the program to their faculties, and helps with the application process.

Meanwhile, one expert said that Indonesia is hard at work improving its education system as the government has become more cognizant of the importance of quality human resources.

And, on the eve of the AEC coming into full force, this has become a priority.

Research, Technology and Higher Education Minister Muhammad Natsir once stated that the country should aim to have no less than five international-standard universities.

Achieving this target means improving the quality of higher education institutions, including their human resources, he said.