For designer Biyan Wanaatmadja, fashion realm is not only crafting highly elegant embellished ethereal pieces, but it is an expression of the world’s colourful society. 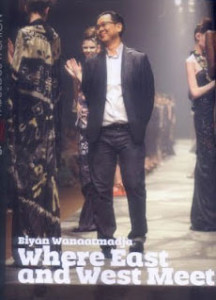 Having a friendly talk with Indonesia’s noted fashion designer in his cozy studio put a relaxing afternoon with a jovial mood.

Looked rather laid-back in style, Biyan is indeed a visionary playing get-up-and-go when it comes to innovating his haute-couture for Indonesian celebrities and high-profile socialites. Indeed, Biyan’s chic fashion designs have been echoed beyond the archipelago as the master craftsman has thus far brought his pieces on the table of fashion plates in countries such as Singapore, Malaysia, Hong Kong and the Middle East.

Profoundly wrestling with his talent and skills for more than 25 years, the one-of-a-kind fashion designer has been offering fashionistas a lifestyle concept of Biyan.

Notwithstanding his success in the fashion world, the 53-year-old Biyan in fact never had a dream to be a fashion designer even until his first year of taking architecture program at a college in Germany. However, there was a turning point where Biyan, who has always been interested and attracted to visual crafts, switched the gear and decided to pursue his career as a fashion designer after graduated from Müller & Sohn Privat Mode Schule in Düsseldorf, Germany and London College of Fashion in London, the U.K. in 1977 and 1982, respectively.

His decade of staying in both Germany and the U.K. really opened his mind where the colourful society in both west and east represents a blend of innovatively endless fashion lifestyle. For that reason, he continued exploring the fashion’s world by staying another year in Florence, Italy before going back to Indonesia to embark on a fashion breakthrough where his innovative creation of designs have hitherto taken him to an array of exclusive fashion shows. 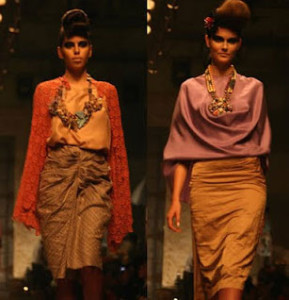 Q: In today’s globalization era, what is your view on fashion realm?

A: I think the world has gone into two directions. As the term of globalization itself means living in the borderless era, the world of fashion as a result has emerged where the colour of east and west blend. I always believe in the best of both worlds. Apart from this, technology has become the ‘in’ thing. We all live in the cutting-edge computerized epoch. However, as more people follow the lifestyle involving the high-technology development, many are also hungry for something that has artistic touch of human craft such as painting, handicraft and of course fashion designing.

Q: How do you see today’s Indonesian fashion designers in general?

A: Unquestionably, they possess great talent and skills needed to become professional. But to be able to partake of fashion world globally, they indisputably need more than just talent and skills. Among other essential aspects needed by our designers in the archipelago are the support from fashion producer and fashion factory including access to credible fashion school for the skill’s enhancement where I believe Indonesia still lacks for.

Q: Who is your favourite designer?

A: I always admire Japanese designers like Issey Miyake and Yoji Yamamoto. The two have contributed much to the harmony of the authenticity of their traditional value yet able to absorb and embellish the modernity into their line; and more importantly, their exquisite creations have long been recognized worldwide. Such chic blend is a great example of fashion realm where east meets west.

Q: In your own words, is going international considered a better achievement for a local designer?

A: I would say the answer is both yes and no. The more importantly, a designer should love what they do and should get the best of him or herself toward contributing his or her work. It really doesn’t matter, in my opinion, whether you are domestic or international player, Through the work and designs that a fashion designer does everyday, he or she can get a sense of whether going international is a better step while some designers would have achieved a better success by being domestic player. But when you see the virtue behind being a fashion designer, who wouldn’t like to go international? 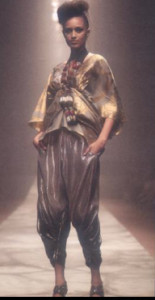 Q: What is your long term goal in terms of being a fashion designer?

A: Being able to do what I truly believe and to continue designing to the higher standard and hopefully the career that I’ve been stepping in for more than two decades will become a stride. And in order to maintain being trendsetter, innovation should be the focus.

Q: What is your view on Indonesia’s fashionista glam along with the fact that many fake branded fads are now widely available in the market throughout the country?

A: If you are a true fashionista, you should only wear the original one. Nevertheless, we wouldn’t have been able to see the real thing if there hadn’t been the fake one in the market. I do believe that the phenomenon of original vs fake always exists as we are entering an era where people creates certain niches where those niches have become an inspiration. To fulfill those craving for certain branded, but couldn’t afford to buy, many producers of fake branded goods have avail of great profits in their business. The regulation and law are also crucial to find the way of how to eliminate or at least minimize the spread of the fake branded products. Brands are created for certain reasons such as high-quality and image. In some cases, people like to be associated to certain brand that enables them to become one of the members of particular society. It’s nothing wrong with that. On the other hand, many people who can’t afford to buy branded clothes would rather buy the fake one in order to boost their self- confidence. To me, it’s like you are deceiving yourself. For those who are in this category, I would advise to buy unbranded ones, but with quality that money can buy.

A: Biyan!!! I just want to be myself. I believe God has created each one of us to be unique and I’m really grateful for being a Biyan.

A: I would like to live in whatever age is granted to me as long as I could be healthy and productive even though the number is 100.

Q: How do you react at the fact that people get older?

A: Getting older is something natural. Nevertheless, this should not be an obstacle for us to hold back what we could achieve.

A: Well, it really depends on how you see it. Age is a physical matter, but always stay productive is more important. There is no point of being younger but less productive. I’m always inspired to see someone who is old at age but he or she is still able to fruitfully contribute to his or her creative work.