Having more than 26 years of fashion design under his belt, Biyan Wanaatmadja again shows his talent and skills through his latest collection, which he encapsulates in the theme “Sense.” 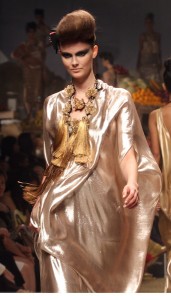 The renowned fashion designer really understands the taste of modern women in fashion. His women’s wear collection 2009-2010 is the proof of his consistency and the exploration of his sensitivity.

Biyan believes the importance of keep innovating when it comes to making his masterpieces. Indeed, innovation is the word that has climbed him to fame in not only Indonesia but also abroad.

Being keen on visual crafts since young, Biyan’s distinguished cutting techniques still bring out the beauty of the elements in his latest collection. The material’s elements having various textures are sewn side by side and in overlapping way.

The silhouette is constructed in parts, but the whole design still gives the overall slim impression. The play of volumes can be seen in some tops, accentuated broidery, application of beads and crystals and some random details of the drapery. Amazingly, these things still give the vestiges of practicality, not to mention the notion of more advanced level of luxury.

Truly, the collection has unique concept, particularly in attractive configuration of bright hues that corresponds with natural colours of skin, paving the way for harmonious beauty.

The exploration of experience implemented by Biyan in the “Sense” collection has influenced his senses in creating his garments. This time, market is the place where he found the inspiration to make the latest collection. “A market is a gathering place and a centre of interaction among people from various ranks of social and economy. A market has been long considered as the endless source of information and inspiration. And in a market, people unconsciously explore their sensitivity of their senses: seeing, smelling, touching, hearing or communicating,” Biyan asserts.

He adds that regardless of how comfortable people are with modern and practical supermarkets, people sometimes long for the nostalgic atmosphere of a traditional market. In general, a market is the epitome of a real tradition, a cultural root which reflects the lives of the social community at a particular time.

Despite the element of tradition remained in a market, Biyan sees all the colours there. “And this time, my colourful collection displays the essence of freedom. The collection is also about something that is real. It’s all about real clothes and something that makes sense,” Biyan says.

Between his globetrotting schedule of attending Premiere Vision in Paris or Interstoff in Hong Kong, Biyan never forgets his experience going to the traditional market of Sukawati in Gianyar, Bali or going to various fruits markets, flower markets and even flea markets. For the determined fashion designer like Biyan, going to a market is one of the precious inspiring moments.

His frequent visit to Sukawati market influenced him to create clothes with Balinese black-and-white patterns and white kamboja flowers (plumeria). “Gianyar is rich in history and considered as the centre of Balinese culture. The exotic market of Sukawati gives me colourful ideas to create Balinese-inspired clothes,” he says. 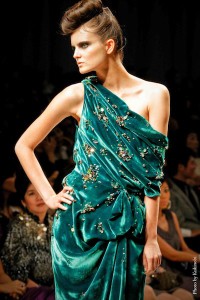 Market goods such as fruits, vegetables and flowers are applied not only in the form of print fabric and embroidery, but also in the series of colours in the entire collection. The red of guava, the green of fresh vegetables, the purple of eggplant, the orange of lobster are some fresh colours which are applied and developed into the embroidery details and beadworks.

The variety of textures such as smooth, soft or wavy becomes the groundwork to develop the materials of lame, silk duchesse, or hand-made woven cloth. Some other materials are processed with specific finishing techniques to achieve the desired quality of softness and adaptable lightness when the garment is worn on the body. There are also prints with the simplified shapes of fruits, done on hand-made, resulting in the effect of combined textures and one-of-a-kind visual.

Such process eventually hones Biyan’s personal intuition in interpreting his imagination to create a concept for his fashion collection. The “Sense” collection is a reflection of Biyan’s experience on his various and continuous interaction and experience that can be absorbed by people’s senses.

Biyan is one of the few acclaimed Indonesian designers who present a solo fashion show every year. Having the theme of “Sense,” Biyan’s last show in Jakarta had the touch of a real market where women wearing sarong and kebaya as well as sported midi dresses were seen on the stage as a part of the show.

Truly that Biyan’s innovative creation of designs has paved the way for a number of striking fashion shows in Jakarta and cities abroad. He is always inspired to continuously contribute his creative work to the fashion realm.

A believer of the best of both worlds, Biyan says that the world is a colourful society comprised of two directions, east and west. “And the world of fashion is where east and west meet.”