Born of American and Indonesian parents, Jeffry Keola Iskandar is proud of being an Indonesian while implanting himself a positive value where west and east meet. He speaks to Aulia R. Sungkar.

Preferred to be called by his middle name ‘Keola,’ the second child of Daniel and Deborah Iskandar is indeed a laid-back kind of boy yet his friendliness reflects his warm character of an early teen likable figure. 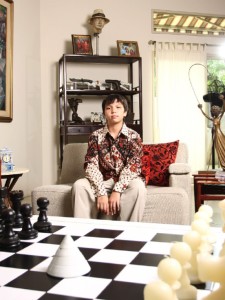 Keola has thus far taken advantage of being raised by two parents from different cultures, of whom have inculcated in him a moral value of being world citizen.

Becoming world citizen can be of anyone from any nation. Despite his high esteem of both western and eastern values, Keola has self-assertion of his preferred identity as being an Indonesian.

An old quote saying ‘when in Rome do as the Romans’ seems to influence Keola’s determination of his nationality. “Jakarta is my home town for better or worse as my family and friends are here. I, with the support of my parents – particularly my mother – have also chosen national school as my education path,” with his earnest look, Keola assures that his decision for attending a national school is the right one.

“Depending on how you perceive a school – be it national or international – I personally believe that many national schools, though not all, impose better discipline that is potential to cultivate fruit of better character and personality building to students.”

The 12 year-old boy who is really into history in addition to his outstanding knowledge of math and science asserts that he doesn’t feel any burden from attending Saint Theresia Junior High School, a Catholic school of which many feel that the discipline imposed is strict.

With his depth of skills in math and science, Keola seems to be enthusiastically eying on his future of being an engineer. His creative thinking about the engineering realm is seen by his interest in playing construction games in his laptop. “Likewise, I’m always interested in playing Lego since I was a little,” the calm but optimistic Keola adds.

He, nevertheless, acknowledges having difficulties to spare some time for games and other leisure activities as he has to go to school from Monday to Saturday. Not to mention his extracurricular activities and his involvement with the school’s choir.

“Fortunately, I have been able to play tennis and soccer at my leisure, though not so frequent. But my parents and I along with my siblings routinely ride bikes every Sunday morning on Jalan Sudirman,” says Keola who sometimes swim at his house after the bike riding.

Mall might be a nightmare place for him as he is not into fashion, but it can be his paradise for movie and food. Not only does the Aries boy keep up with blockbuster movies such as Eagle Eye and Batman, but Keola is truly a food aficionado.

Admit that his day would not be perfect without eating rice; Keola loves various Indonesian cuisines such as bacang, rendang, tempe, semur, satay ayam and mie bakso.

Having mie bakso at Bakmi Gadjah Mada with his friends is one of those frolic moments for Keola. “But I love street food, too. You should try Bakmi Asun, it’s a gerobak (food street cart) across from my school and one of the best mie ayam in town,” Keola, who also sometimes like to cook indomie at home, convinces.

Keola also enjoys spending an evening moment at fine dining with his family. “Most of the time I eat Indonesian food at home. So, I love tasting different cuisines like Chinese, Japanese and American when dining outside with my family.”

Fish n Co and Crystal Jade at Pacific Place and Sushi Nobu at Darmawangsa Square are among his favourites. “What I like about these three restaurants is the fact that they are not only presenting their best dishes, but no less importantly, they are situated not far from my house. It means less traffic!” he exclaims while breaking into his smile. “You know traffic is what I don’t like about the city.”

Just like other early teenagers his age, music has started becoming one of his peers’ influences. Many bands and musicians from the United States such as Black Eyed Peas and Linkin Park mesmerize him owing to their highly innovative contribution to the world of music, Keola remarks. “Unfortunately, this is not what I see with Indonesian musicians. They need to be more creative in producing songs or they will never go international.”

Asked whether he likes to visit the United States, he said, “I haven’t been to many states and cities in the US I usually go there to visit my grandparents and relatives from my mother’s side in Montgomery, Alabama. As for holiday destination, I would say Singapore is better. It’s very clean and more happening.”