Dreaming the impossible dream, Prof Dr Winarno never stops in his mission to introduce the magic of Indonesian cuisine to the world 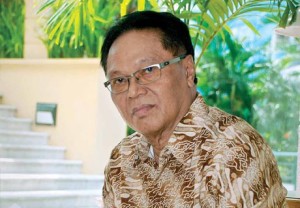 You have to keep dreaming. With prayer and courage, you can eventually realise your dreams,” Prof Dr Winarno, the former rector of Atma Jaya Catholic University, explains. In a voice that oozes both sophistication and humility, Winarno shows us a page from his biography (penned by JB Soedarmanta) which quotes part of the lyrics to “The Impossible Dream”, a popular song from the 1960s that has been performed by dozens of famous singers and bands, including Elvis Presley and The Carpenters.

“‘To dream the impossible dream. To fight the unbeatable foe/ To bear with unbearable sorrow/ And to run where the brave dare not go…’ These lyrics have become my inspiration and the fuel that keeps driving me forward,” he enthuses.  With dreams, prayers, courage and talent, Winarno earned a scholarship to the University of Massachusetts, where he subsequently became the first Indonesian to hold a doctorate degree in food technology.

He has produced over 100 scholarly works, which have been published in both national and international journals, and has written dozens of books on food science, nutrition and post-harvest technology. In addition, Winarno has been invited to lecture at many renowned universities worldwide, held various prestigious positions in organisations within ASEAN and the WHO, and has been bestowed with numerous national and international awards.

Moreover, the Indonesian Museum of Records (MURI) recently named Winarno as the founding father of food technology in Indonesia. According to Winarno, today’s developments in food technology offer the opportunity for much better specifications and standardisation of various Indonesian food and beverages, making it more feasible for local cuisine to enter the international market.

Born in Klaten in Central Java on February 15, 1938, this father of two sons and a daughter says that despite already reaching his retirement age, he still has dreams that he hopes to realise. One of these is to see traditional Indonesian dishes listed on international menus across the globe.

What makes you optimistic that our local food will one day make a splash in international culinary arena?

Food, particularly in the West, is generally classified in two dimensions, calories and energy. More dimensions are added in Asian countries such as China and Korea, which have developed traditional herbal food and beverages which are described as being ‘nutraceutical.” Korean tea and Chinese ginger would be good examples of this. We Indonesians have jamu (traditional herbal potions). One of the examples in the category of jamu is beras kencur, a simple combination of rice and brown sugar that has long been proven to maintain health and vitality. The traditional soy food of tempe is another example. Tempe contains protein comparable to, yet healthier than meats. Our tofu is also comparable to that produced in Korea and Japan. Too bad that the world has yet to recognize jamu. It’s time for us to promote our food heritage.

How should we promote our dishes to a global audience?

This is my current dream and I’m in the middle of drafting an encyclopaedia of traditional Indonesian dishes, which will be printed in both English and Indonesian. My hope is that it will be a great asset in attracting people from all corners of the world to discover more about Indonesia’s rich dishes and culinary traditions. I have an outstanding team working on this project with me and the encyclopaedia will be published in a set of seven volumes.

Do you think that your encyclopaedia will help to promote our traditional cuisine?

Why not? I have travelled many parts of the world and encountered with a number of food experts from different countries who agree that Indonesian food is considered one of the world’s healthiest. The encyclopaedia will be a useful reference for those seeking to discover more about Indonesia’s various cuisines and their relation to our rich culture. Many local dishes are related to local traditions in fact. Nasi tumpeng (a traditional rice cone) and nasi kuning (yellow rice) are great examples of this.

Speaking of travel, what are your favourite travel destinations?

For local destinations, I love Bali for its uniqueness and exoticism, and Manado for its fabulous marine atmosphere. For overseas, Rio de Janeiro is at the top of my list. Its annual carnival is the world’s biggest and most happening. As I’m a Catholic, I also love making pilgrimages to the Vatican. I like visiting museums and the holy city is filled with historical museums. I’d say the whole city is one big museum. I also adore French for its culture…and of course for its food and wine!

What are your favourite foods and wines?

I pretty much eat any good food, but nothing can beat my appetite for tempe and gudeg. I love Bordeaux wines. Pairing a glass of Bordeaux with steak makes for a truly romantic dining experience.

Speaking of romance, do you have any tips for the younger generation relating to this month’s Valentine’s Day?

Love is happiness, which can be enhanced by striving to become increasingly tolerant and open-minded towards our many differences. These character traits can make you into a more globalized individual. But no less important, the more you open your mind, the more you will realize that Indonesian food can benefit the entire world.