Located some 150km south-east of Jakarta, the capital of Indonesia’s West Java province has a quaint atmosphere. With a population of approximately 2.5 million, Bandung has a laid-back lifestyle that is different from the country’s capital with all its hustle and bustle.

Just a two-hour drive from Jakarta puts you within reach of Bandung’s crisp mountain air, historical buildings, fusion food and great shopping deals. It’s no wonder the city folks of Jakarta hit the road so often for a weekend getaway there.

Dubbed the Paris of Java, Bandung has a mix of European elements that blend with Eastern culture. As we drive around, we witness the presence of historical buildings that maintain the city’s aesthetic value. 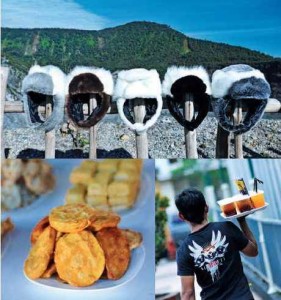 Literally meaning ‘Independence Building’, the art deco-styled Gedung Merdeka was the venue for the momentous 1955 Asian-African Conference. Today, it serves as a museum displaying the conference’s related historical artefacts.

On the same street is Bandung’s oldest hotel. Originally built in 1870 as Societeit Concordia, the hotel was revamped and expanded in 1937. Upon completion in 1939, the name was changed to Savoy Homann. Featuring Dutch art deco-colonial architecture, the historic hotel is perfect for those seeking a laid-back sanctuary.

Braga Street was the most famous address during the golden age of the Dutch Indies. Today, the street can be seen as an outdoor museum of architectural styles.

Going downtown, we stop by at Gedung Sate (Satay Building). This iconic building has a mix of neo- classical style with native elements, and now serves as the office of West Java province’s governor. The design of the building’s central pinnacle evokes the shape of Indonesia’s satay dish. In 1925, it was the only big building in the town of Bandung. 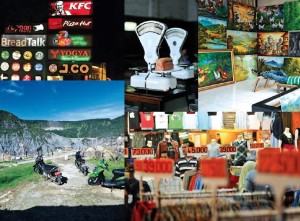 Bandung is also dubbed the City of Flowers owing to her beautiful landscape. On our way to Lembang, the highest point of Tangkuban Perahu Mountain, we visit Dago Tea House. This cultural park is basically a tea plantation featuring a restaurant serving authentic Sundanese (West Javanese) cuisine and its own tea.

While enjoying the beauty of the panoramic landscapes, we have Sundanese teh po ci (hot tea from a clay teapot), bandrek and bajigur. The last two are traditional drinks made from various local ingredients that warm your body. The drinks are also best paired with fried corn, which you can buy from street vendors on the way to Lembang.

En route, The Peak Resort Dining sits on the highest hill of Girindah and offers European dishes. The restaurant is surrounded by the beautiful spectacle of the mountains of Tangkuban Perahu and Burangrang during the day and the sparkle of Bandung’s city lights in the evening. 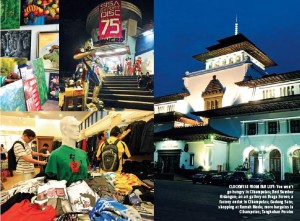 Bandung offers foodies a fantastic choice, from food stalls to fine-dining eateries. The locals we encounter tell us there are more than 500 places serving a wide array of cuisines, from traditional Bandung fare to Chinese and European cuisine.

There are also dozens of Chinese food restaurants spread over the city. One of the most famous is Queen, a semi fine-dining eatery that serves a variety of authentic Chinese dishes. And those in search of upscale Western dining should reserve a place at either The Wind Chime or The Peak.

Coffee lovers should not leave Bandung without paying a visit to Kopi Aroma. Located on the corner of Banceuy Street in the city’s old Chinatown, this art deco-style shop produces and sells what people say is arguably one of the best coffee blends in Bandung — if not the archipelago. “We produce our own coffee blends, using the same grinder machine and roasting tools that my father used since he first opened the shop in 1933,” says Widya Pratama, the shop’s second-generation owner. 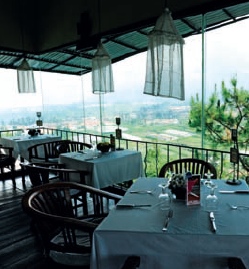 Cihampelas Street is the city’s oldest centre of factory outlets, selling everything from jeans, shoes, T-shirts, accessories and other apparel.

Many of Bandung’s factory outlets have gone upmarket. Locals tell us there are now as many as 50 outlets spread over the city. But note: the quality is variable. “Some of the sales items may be rejects, having fallen short of export quality, but there are so many of good quality,” says Andre, a local who comments that many visitors are finding these outlets in Bandung a great bargain.

Rumah Mode seems to be the hottest factory outlet and sells a broad range of men’s and women’s clothes. Andre says those seeking to buy kids’ clothes should visit Victoria and “for handbags and shoes, you should go to Toko Diaz”. 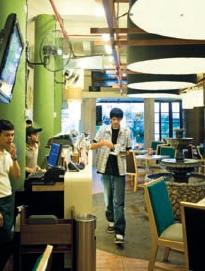 Within the last five years, Bandung has experienced the mushrooming of shopping centres, malls and lifestyle centres that house coffee shops, nightclubs and cafés that make the city so much more happening.

Paris Van Java, a very modern European-style outdoor shopping centre, is one of the city’s most fashionable hangouts. Braga City Walk and Cihampelas town square are also great places to hang out, with their innovative coffee shops and cafés wrapped with a warm ambience and nice music.