Other than having the strong value of local culture and religion, there are foreign elements that have long been infused into the historical quality of Balinese art. 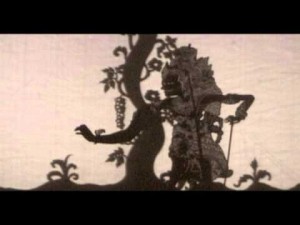 Both Balinese artists and the community believe that such foreign influence does not contradict local norms and cultural values. In fact, such a rich blend has made Balinese art colorful.

Historically, foreign elements have for centuries been attached to Balinese culture and art. In addition to the implanting of the culture of Hindu religion into the art, many Balinese paintings have strong influences from the Chinese, Egyptian, European and Indian cultures.

Such uniquely blended innovation in art has been taking place since the time of the Dalem Waturenggong kingdom, back in the 15th century.  Art during that era in Bali was a mixture of the Balinese and Indian cultures, influenced by Hindu ritual.  One example of art inherited from the Dalem Waturenggong kingdom is the Sidhakarya mask dance.  This mask is usually worn in a dance in every ceremony and ritual as a request that the ongoing ceremony can be conducted successfully in accordance with its purposes and objectives. 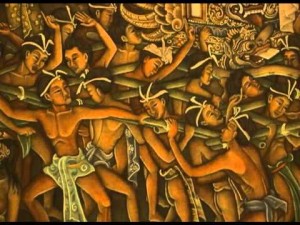 Though dance, music, and even wayang (leather puppets–a cultural rich and deep art on the meaning of life) theaters have been continually enriched by contemporary and external artistry, they are still laden with religious connotations, performed mostly to appease and to please the gods and the goddesses.

Generally, the existing traditional dances in Indonesia like Balinese and Javanese dances have been a manifestation of the community’s everyday life. Also, the regional art’s development on each region has a strong influence from the past history. James R. Brandon (1967), one of the Southeast Asian cultural observers from Europe, concluded that there were historical periods in the Indonesian history.

First, pre-historical period, about 2500 – 100 B.C., where the culture was isolated from any foreign influence. Second, during year 100-1000, where the Indian culture started melting with the local culture, particularly in Bali. During 1300 – 1750,

The assimilation of external influences is also seen in carving and sculpture.  We can see examples of melting pot art in relief carvings and sculptures like patra and ulanda.  Partra, which contains Chinese elements and ulanda, a mixture of both Dutch and Egyptian arts have contributed richly to classical Balinese carving. 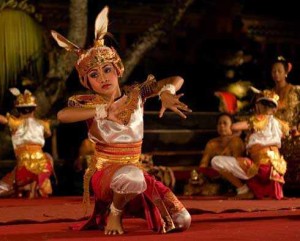 A Melting Pot of Art

In the epitome of western imagination, Balinese culture and art can be interpreted as the exotic. Indeed, the island of gods is a melting pot for international and local artists to create and collaborate. There are many local artists and teachers who are happy to share their personal experiences with foreign artists.

Today, cultural tourism thrives alongside a generation of modern composers and performing artists. Interestingly, many of these talented composers and artists regularly collaborate with foreign artists to create a new scene of art, pushing Balinese performing arts into new and innovative directions.  Some of good examples are the use of modern music in Tari Pendet, Balinese welcome dance, and Tari Kecak, the Ramayana Monkey Chant. 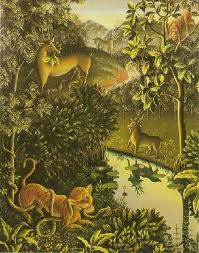 The presence of foreign artists in Bali actually stretches back to 1920s. Names such as Russian painter Walter Spies and Canadian composer Colin McPhee have greatly contributed to the development of Balinese art and culture.

While Spies was known for his Balinese classical model and tropical romance, which was depicted on many of his paintings, McPhee successfully made ethnomusicology of Bali and created music with strong Balinese influence. McPhee’s best-known musical work was Tabuh Tabuhan. 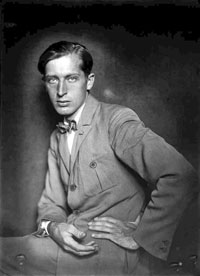 It’s worth to know that Spies’ first oil painting in Bali – Banyan with Two Young Balinese, fetched US$ 1.2 million at a Sotheby’s auction in Hong Kong in April 2012.

More and more foreign artists have hitherto settled in Bali. The Swedish born painter and sculptor Richard Winkler is one of them. After having held a number of exhibitions in his motherland, Richard found Bali as his place of destiny.

He has lived in Bali since 1997, and the figures on his works have gradually changed ever since. His art figures have become more human-like with hands and faces. With stronger light and colors, the theme has more elements of nature and harmony. The natural vibrancy of Bali, culture and the tropical weather are what made Richard feel very excited to live as an artist in Bali.