TIME TO PLAY. François-Henry Bennahmias injects his witty and sharp personality into the business side of Audemars Piguet. The passionate CEO speaks of the company’s past and present to Chris Andre Business with attitude is what separates the winners from the rest of the players on the field. Such is the case with Audemars Piguet, a leading Swiss watchmaker that has been around since 1875. The last four years signaled what is perhaps the independent luxury house’s most transformative period, from the way they slimmed down the novelties back in 2013 to taking the world by storm with innovative timepieces today.

The proud captain steering the brand through this daring journey is none other than the house’s incumbent CEO, François-Henry Bennahmias. During his last visit to Jakarta, he unabashedly wields the latest Royal Oak Perpetual Calendar Yellow Gold on his wrist. That excessive golden luster is certainly an acquired taste, but it does find some resonance with how Bennahmias carries himself and how the house is currently doing: with style and success.

Bennahmias’ get-down-to-business way of talking, peppered with witty banter and generous amounts of laughter, lights up the room, and the house’s most exclusive pieces to date, not excluding the one-of-a-kind Royal Oak Double Balance Wheel Openworked watch, certainly adds fuel to the fire as we converse about men’s timepieces. It makes sense then why Bennahmias, who has worked for the brand for over 22 years and held the post of CEO since 2012, is the right man for the job, and why Audemars Piguet stands tall despite the recent economic slowdown. As a matter of fact, the future, in his eyes, seems brighter than ever.

Chris Andre: Given the current economic slowdown, how’s Audemars Piguet doing?
François-Henry Bennahmias: When there’s a crisis, it’s not that everything stops. I’ve got an art analogy. Say, Picasso had a thousand paintings and the art world is booming. So, the first painting would sell for a crazy lot of money, and the thousandth would sell as well but not for quite as much as the first one. If the art world shrinks due to a crisis, the top 250 will still sell—and perhaps for even more money—but the last 750 would either not sell or go for less money. It’s the same thing in the watch world. There are hundreds of watch companies, but I do believe today that we’re in the top five brands that are still performing well. When there is a crisis, people focus on fewer brands, but they don’t stop buying completely because of the exclusivity and the quality of watches we’re making. We [Audemars Piguet] are not making so many watches every year that the entire thing would entirely stop.

CA: This is somewhat in line with what you did when stepping in as CEO in 2012, that you limited the number of novelties.
FHB: At that time I wanted to limit the number of novelties for 2013 and 2014 since I came onboard as CEO in May 2012. Before that, there were obviously a lot of great things already. But, we were too dispersed. There were too many things, and the message altogether was not a perfect one. The proof is that, even though we already had 1,300 people in the company, we couldn’t get the perfect brand message from one team to another—like what the brand stands for and what our goals are for the next five to 10 years. I want to make sure that, no matter whom I talk to in the company, they understand exactly what’s happening. For this, we needed to do two things: Immediately throw away everything we do badly and focus only on where we do very well. We’ve already had a lot of good watches, so why do we need to do others? [In essence] it’s going back to the gym, so we had to work out before going back to the field. When we are ready, when we’re in good shape, now we can play. This is why we launched a lot of new things in 2015 and also in 2016. Now we’ve got a good game plan for the next five to 10 years. We didn’t cancel our creativity; we just wanted to take things slow. 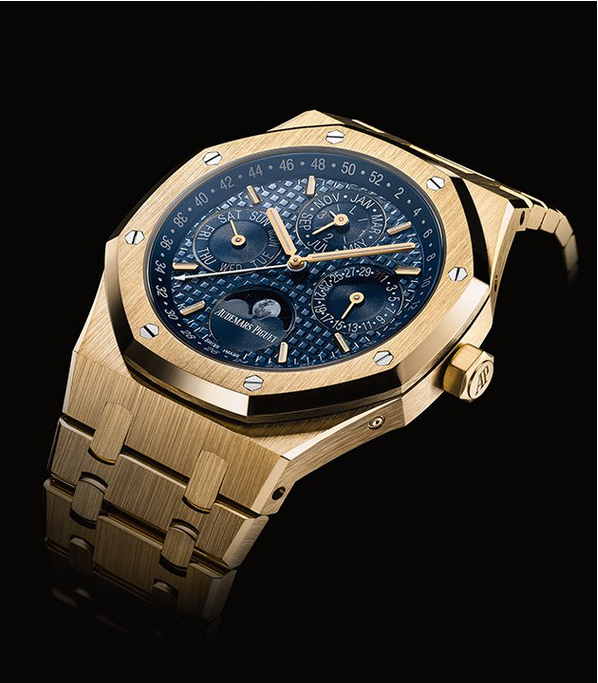 CA: Are minute repeaters going to be a long-term focus for the brand?
FHB: Minute repeaters have been a big part of the history of the company. During the first ten years of Audemars Piguet’s existence, we’re producing a lot of minute repeater mechanisms. So that is a part of who we are; it’s [the mechanism] in our blood. By bringing that to the 22nd century—it’s beyond the 21st century—we are making a statement, and we’re not done yet. I can guarantee you that there are many new things in the years to come, in the chiming mechanisms or in other watchmaking complications, by the way.

CA: Another striking emphasis today is the bright colors, not to mention yellow gold, for the 2016 Royal Oak collection.
FHB: Bright colors because in the last five years we’ve only seen black and red. It’s boring. I said let’s make something cool especially for the summer edition. We had colors like 15 to 20 years ago, so we didn’t create something totally new. But apparently it’s a great success because people buy them left and right, everywhere in the world. Why? People want to have fun. Because if it were a trend, the gold watches would have already been out there and we would only follow the trend. But, no, it’s a bet. We haven’t seen yellow gold watches since six to eight years ago in the collection. But, we made them in small quantities and wanted to see the reaction. The good news is that no other watch company is bringing in yellow gold, so we’re the only one to do that in both Geneva [at SIHH 2016] and Basel [at Baselworld 2016].

CA: Also, one of the most interesting highlights is the Royal Oak Double Balance Wheel Openworked. What’s the story behind this?
FHB: I have a very important rule in business. No matter what you do in life, if you have been doing the same job for quite some time and you know what you’re doing, most likely you have good ideas as well. If you have an entry-level job, that doesn’t mean you don’t have ideas. So, what I want to give to everyone in the company is an open opportunity to bring ideas on how to do it better.

One of the biggest rewards this year is that skeletonized Royal Oak Double Balance Wheel timepiece. Neither the marketing nor the product department, nor I, asked for that creation. It’s our own watchmakers on their own who decided to assemble the mechanism, to test it out and to see if it would do better than prior editions. I saw that mechanism and asked, “Does it work better than the prior skeleton we had?” They said “Yes.” So, I asked then, “Can we start with the production for it?” “Yes.”

It wasn’t inquired by the company; they did this on their own. When you have the possibility in the company to do that, that’s a good sign. People are not boxed in anymore. You need to keep a little bit of a free spirit to be different, to make a statement. When I came onboard in 2012, some people were leaving the company. We now receive 2,000 resumes a month, and there are only 1,500 people in the company. A lot of people want to come and join Audemars Piguet, because they perceive us as a brand that delivers experiences, crafts and ultimate quality. They want to be part of the team that wins. CA: Speaking of crafts, while Audemars Piguet is always about mechanical watches, is there anything to learn from the rise of smartwatches?
FHB: There is always a lesson to learn when there’s a new player in town. That player was not there five years ago. It’s not Apple only, but also Samsung and everybody else. When there’s something new, you have to look at whatever is happening. What could it generate? You’re right; it’s two different things. Because smartwatches are these connected devices and they are completely mass-market products, like fast food. And that’s fine. I can go to a fast food restaurant but I also enjoy a three-star Michelin restaurant. There are people who can only eat fast food, people who can only eat fine dining and people who can eat both. There is always room for everybody.

CA: How’s the brand’s overall progress in 2016?
FHB: We produced a total of 40,000 watches last year, a slight increase from the year before. So, in terms of production, we’re not growing too fast, only adding four to five hundred pieces per year. We’ll stick to 40,000 for at least five years’ time, however, meaning that our job now is to focus on product quality, distribution, partnership, boutiques, etc. Hopefully, we do so well that we can generate demand for 42,000 or even 50,000 watches per year, but we’ll still make only 40,000. This will significantly raise the brand’s equity, the value and also the recognition.

CA: You’ve been with the company for over 22 years. What makes Audemars Piguet still Audemars Piguet after all this time?
FHB: People. It’s always people in the end. No matter what you do, no matter what entity you’re in—whether it’s business or sports or anything—it always comes back to people. One of the most rewarding things as the team captain—it’s not “the CEO” for me—is when people come to Switzerland and they talk to our watchmakers, marketing executives and everybody else, they eventually say that our people are very humble and one thing that they exude the most is passion. They are passionate about what they do in a very humble way. They are very thankful every time they see people who are interested in what they do. That’s the number-one strength of our company. We have a lot of good people. My only goal, by the way, is to be the best conductor of the “orchestra.” I’m not the best pianist or drummer. I don’t know how to play guitar. As a team leader, you have to be able to make people play the right music together. That’s the most rewarding thing for me.